The U.S. Government, through the U.S. Agency for International Development (USAID) announced the expansion to Nepal of two successful agricultural programs that promote food security and economic growth. 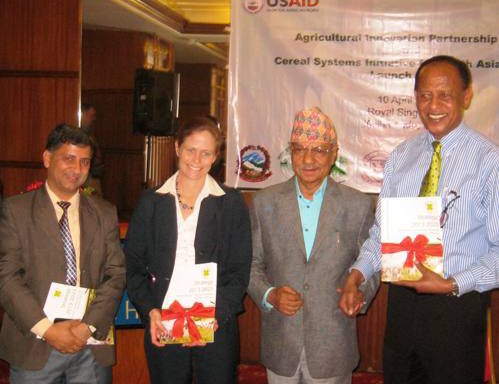 “The document would not come to present shape without technical and logistic support from Agriculture Innovative Partnership program managed by Cornell University and Sathguru Management Consultants,” said Vice Chancellor Pyakuryal. “USAID has a major contribution in modernizing agriculture in Nepal. I am encouraged by the interest shown by USAID to support again in agriculture research in Nepal.”

Earlier, the U.S. Government, through the U.S. Agency for International Development (USAID) announced the expansion to Nepal of two successful agricultural programs that promote food security and economic growth.

According to a press release issued by Public Affairs Section Embassy of The United States, under a partnership between USAID/Nepal and USAID/India, the programs will increase Nepali smallholder farmers' access to mechanized farming technologies-such as low-cost attachments to tractors that increase farmers' agricultural yields and income.

“The programs will also strengthen Nepal's Agriculture and Forestry University and its curriculum that focuses on the needs of farmers and agricultural markets,” said a press release.

Speaking at the launch event in Kathmandu, USAID Mission Director Dr. Beth Dunford remarked, "we're working together with the Government of Nepal and key private sector actors to build high-impact partnerships to expand innovations in the country, strengthen local capacity of government and private sector and build the thriving economy that will one day replace our assistance. In Nepal, nowhere is this more important than in agricultural development, which we know is one of the surest routes out of poverty."

Since 2010, USAID, under the Cereal Systems Initiative for South Asia (CSISA) program, has partnered with several Indian private sector firms to develop agricultural equipment that is used by farmers in Punjab, Haryana, Uttar Pradesh, Bihar, and Odisha. The CSISA program will now work with Nepali public and private institutions to extend this low-cost innovative agricultural equipment to Nepal to help improve agricultural practices.  USAID will support the Nepali private sector to develop cutting-edge agricultural technologies suitable to the country's mountainous geography. This CSISA program will also help generate employment and income by training local mechanics to repair and maintain the equipment.

Addressing the program, joint secretary and head of policy and international cooperation, coordination Division Ministry of Agricultural Development Dr. Rajendra Prasad Adhikari acknowledged USAID’s long support to agriculture development in Nepal. “Many Nepalese got opportunities to study abroad on USAID’s support and I am one of beneficiary of the USAID’s support to Nepal,” said Adhikari.

SC Issued An Interim Order Against Citizenship Ordinance By Agencies 2 days, 7 hours ago

SC To Start Regular Hearing On Dissolution Of House Of Representatives From June 23 By Agencies 3 days, 22 hours ago