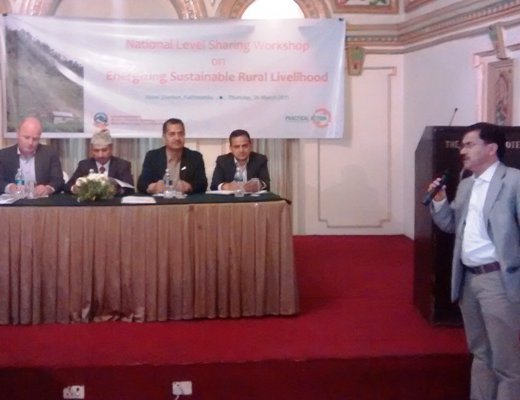 Despite several efforts in the past, poverty has remained a major issue in countries like Nepal. Along with other issues, the gap in the availability of technology is contributing to accentuate the problem.

In the context of injustice in availability of technology and growing poverty, Practical Action is using technology to challenge poverty in developing countries.

“We find out what people are doing and help them to do it better. Through technology we enable poor communities to build on their skills and knowledge to produce sustainable and practical solutions,” said Achyut Luitel, regional director of Practical Action.

Addressing the first National Summit on Technology Justice, Luitel said there is the need to develop a common approach among various stakeholders to end the technology injustice existing in the Nepalese society.

With support from Practical Action Regional Office in Nepal, a National Summit on Technology Justice was organized to initiate dialogue and formulate action plan to achieve justice in the sector of technological access in the context of Nepal.

Determined to bring forth a new dialogue and a series of activities to achieve technology justice, the National Summit on Technology Justice aimed to initiate actions to create an environment where even the most poor and marginalized groups of people have access to technology which helps in making their livelihoods better.  The summit has come to conclude that there should be adequate investment of resources to ensure development and application of innovative and appropriate technologies.

The summit also called on the need to mainstream WASH initiatives and disaster risk management, including climate risk management in the development process through technological interventions, improve access to vocational training to those that are out of the formal education system leading to job creation, and empower end users to utilize ICTs for enhancing the quality of life.

The interaction focused on sharing experiences about the use of different technologies including Agriculture, Food Security and Biotechnology, Water, Sanitation and Hygiene (WASH), Disaster Risk Reduction (DRR) and Climate Change, Renewable Energy, Infrastructure and Transport; and Technical Education and Use of Information Communication Technology (ICT).

During the 2012-17 strategic period, we have prioritized working areas into four main sectors and two cross-cutting sectors, realizing our comparative advantages in these sectors.

As noted by Practical Action, this is a story about two billion people living in poverty, growing gap of technology is widening the gap of poor and rich.

Experiences have shown that technology justice is vital to developing a just and sustainable world. Technological advances have increased productivity and income, improved quality of life and raised life expectancy in the developed world. However, the same is not true with countries like Nepal.

“This is a story about two billion people living in poverty and what we can do to help change their lives forever,” declares Practical Action launching its campaign to end Technological Injustice.

Since the economist Fritz Schumacher founded Practical Action over 40 years ago, the organization has supported millions of people to transform their lives. Practical Action has worked alongside people and partner agencies to come up with new solutions to old problems.

“Schumacher’s groundbreaking book ‘Small is Beautiful’ is as relevant today as it was in the 1970s. We are still living in a world where economic growth and technological advancements offers little for the two billion people living in abject poverty. And we still treat our planet as expendable – exploiting it beyond its natural capacity – with global warming being one such devastating result,” reads a note on Practical Action’s website.

Since its inception, Practical Action has also helped Nepal’s poor to come out of poverty. Its renewable energy program has helped to upgrade capacity of micro-hydro and biogas. Similarly, its smoke hood has saved the health of thousands of people. The early warning system has saved lives of hundreds of people.

With the completion of Energizing Sustainable Rural Livelihood, Practical Action and Alternative Energy Promotion Center have shown that the small intervention in micro-hydro can bring a drastic change in the livelihood of the people.

Designed and implemented in partnership with AEPC, the project ensures sustainability of micro-hydro plants through increased energy utilization by enterprises that enhanced rural livelihoods.

“Our experiences have shown that performance of majority of Micro-hydro project of the country can bring a drastic change in the rural livelihood. At prevent majority of them are not working properly,” said Viswa Bhushan Amatya, head of program, energy, Practical Action, South Asia Regional Office.

Although the two organizations worked just for nine months, Practical Action and AEPC have shown that they have larger areas to work. “Despite working for just a period of nine months, AEPC learned many technological aspects from Practical Action. They need to improve micro-hydro plants of Nepal,” said Prem Sagar Subedi, National Advisor PEU/ AEPC/NRREP.

In the national level sharing workshop, various other stakeholders also expressed their views that a small intervention made in certain plants has made a lot of difference in energy generation.

“This is win-win for both AEPC and Practical Action. We can turn over 2500 micro-hydro plants as more viable and technically efficient to produce energy,” said Ram Prasad Dhital, executive director of AEPC. “Practical Action’s expertise helped us a lot.”

At a time when a large number of MHP have been facing one or the other kind of problem, the intervention through Energizing Sustainable Rural Livelihood has made certain impacts.

“After the intervention, our idea has changed regarding MHP. For the last few years, our plan did not produce enough energy. The project helped to revive our hope,” said Narendra Bahadur Saud, Bhatakate Village Development Committee of Accham District. “We have now enough energy to dry our raw materials used in hand made papers.”

Similar experiences are shared from the MHP operator of Dolakha district. Ratna Dhami of Dolakha has seen the change in engery generation from the plant. “Our 40 Kilowatt plant was virtually at the state of being economically unviable. However, the renovation has changed it. The plant started to produce more energy now,” said Dhami.

“We have seen an opportunity to strengthen rural energy access by creating supply and demand interdependency,” said Amatya.

All this has shown how technology can bring change.