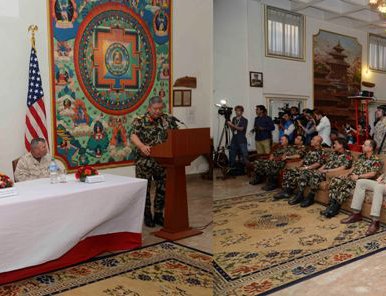 "We are grateful for the essential contributions of Operation Sahayogi Haat to the post-earthquake relief efforts,” said Peter Bodde, U.S. ambassador to Nepal. “The joint relief missions conducted by the U.S. and Nepalese militaries brought life-saving aid to those who needed it most and reinforced the United States’ close partnership with Nepal and its people."

The responsible redeployment of JTF 505 units in the coming days is able to occur quickly since “the capacity of Nepal and the international community to meet the needs of the relief effort continue to grow and together they are able to meet the requirements the U.S. Joint Task Force would otherwise provide,” said Bill Berger, the U.S. Agency for International Development Disaster Assessment Response Team leader.

During the operation, JTF 505, in support of the USAID, delivered approximately 114 tons of emergency relief supplies, to include plastic sheeting, shelter kits, blankets, water, medical supplies, and emergency and supplemental food. In addition to delivering aid, JTF 505 transported 534 personnel and conducted 63 casualty evacuations.

There has been a decreasing demand for unique JTF 505 capabilities in further recovery efforts here in Nepal, according to Lt. Gen. John Wissler, commander of JTF 505.

“We will continue to work closely with our Nepalese partners and USAID to ensure we meet the needs that may emerge during the coordinated transition and retrograde of our military capabilities as long as we remain in Nepal,” said Wissler. “Once we have returned to Okinawa, we will reset our ability to respond to any future disasters requiring our support. We stand with Nepal.”

As recovery efforts have progressed over the past weeks, the need for JTF 505’s unique capabilities has lessened. For example, the logistical expertise of the 36th Contingency Response Group, a uniquely qualified Air Force unit out of Guam specializing in airfield management, is significantly reduced at Tribhuvan International Airport. Aid stockpiles are no longer backlogged as the CRG has conducted training of Nepalese army and airport personnel during their ongoing operations.

“While our participation in the humanitarian assistance and disaster relief operation comes to an end, our relationship with Nepal is enduring,” said Wissler. “This experience has forged a stronger relationship and I look forward to future training opportunities to further improve our interoperability, refine our bi-lateral and multi-lateral processes, and continue to learn from our experiences working side by side.”

Approximately 900 U.S. military and civilian personnel from the Army, Navy, Air Force and Marine Corps contributed to the Nepal relief efforts under the auspices of JTF 505. There were approximately 300 JTF 505 personnel in Nepal, 320 in the JTF 505 Main headquarters in Japan and 280 at the Intermediate Staging Base in Thailand.

“JTF 505 initiated Operation Sahayogi Haat, meaning “helping hand” in Nepali, to limit further loss of life and human suffering in response to the devastating 7.8 magnitude earthquake that struck central Nepal, April 25, and continued the response after the 7.4 magnitude earthquake that struck May 12. Over 8,600 people died and more than 16,000 were injured as a result of the tragic earthquakes according to latest official numbers,” said a press release issued by Public Affairs Section Embassy of The United States.

"We, people, are men and women of the Armed Forces,” said Nepalese Army Maj. Gen. Binoj Basnyat, commandant of the army command and staff college. “We understand each other; we know what the need is. So it has been a tremendous help for us while you were here, and helping us to get things in the proper direction. It's been a great help."