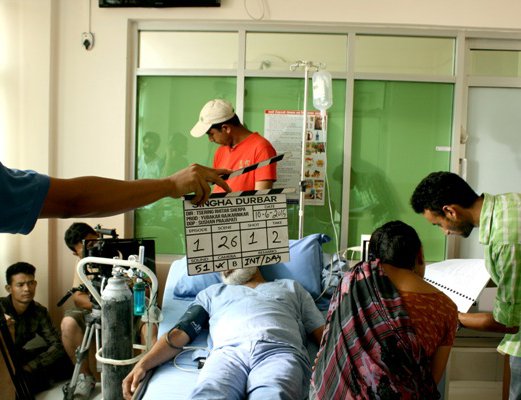 Director Tsering Rhiter Sherpa of 'Mukundo' and 'Karma' fame has started the shooting of Nepal's first futuristic political drama. The television drama 'Singha Durbar' revolves around the story of Nepal's first Female Prime Minister who undergoes various challenges in her quest to establish a governance system of transparency, accountability and collaborative leadership. "The story of Singha Durbar is based on a near future in a post-constitution Nepal. Through realistic story lines, characters and dialogues – the TV series aims to capture the mindset of the audiences, and make them believe in the possibility of a collaborative political culture in the Nepali public imagination," shared the director.

According to a press release issued by Search For Common Ground, Singha Durbar is a 13 episode political drama, depicting the inner workings of the central government. The story has been designed to humanize the country's political situation by bringing forward issues and challenges that dominate our political culture.

GauriMalla, the veteran film actor of Nepali cinema is the protagonist of Singha Durbar. Her portrayal of Nepal's first female Prime Minister enshrines the possibility of women's leadership in the near future, and also encourages an ideal world where female leadership is respected and acknowledged. Malla shared, "Singha Durbar is a content driven political drama, which will change the way people see Nepali soap operas. With a female character as the lead, this drama brings across various issues and challenges that leaders and the public have to go through on a daily basis."

The television series is a joint production of Search for Common Ground Nepal (SFCG) and Mila Productions. Supported by USAID Nepal, the television series aspires to promote positive role models in governance, and a culture of collaboration between the government and the general public. According to Yubakar Raj Rajkarnikar, producer of Singha Durbar, "Singha Durbar is a political drama that helps audiences understand their role and responsibility toward the government. The humanized stories will indeed help bridge differences, and foster a sense of belonging in people towards the government and vice-versa."

Singha Durbar is scheduled to release on September, 2015.

New Data On Nepal PLHIV Stigma Index 2.0 Indicates The Need To Create Arespectful And Equal Environment For PLHIVs In Community And Workplace By NEW SPOTLIGHT ONLINE 4 hours, 6 minutes ago