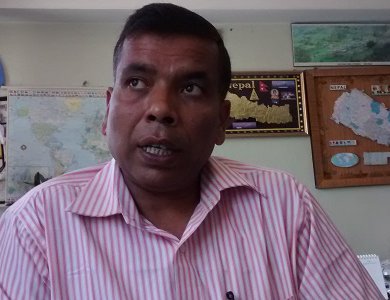 How do you see the role of SWC in the post-earthquake situation?

Following the massive earthquake of April 22, we directed all the NGOs and INGOs to work in rescue and relief operations. We have directed them to go to the districts and work with the coordination and direction of District Disaster Relief Committees. Council has issued a public notice and organized several meetings before their mobilization.

How do you see their performance?

After the report endorsed by DDRC, we will start the process of approval of their programs. According to acts, any NGO and INGO working in the districts needs to a take pre-approval from the council. However, it was not possible at the time of disaster. According to the provision, all the NGOs and INGOs, which are involved in rescue and rehabilitation, they need to present reports to us within 45 days.  Only after collecting the reports can say how much amount and worth of goods went to districts.  We have already received the report of some organizations and we are yet to get the report from all.  They started their mobilization from April 27 and they reached the affected areas by 28. After the earthquake, our priority is to start the rescue and relief. We will receive all the reports by the end of this month. The rescue and relief operation is almost at the last stage.

How do you see the presence of INGOs and NGOs?

After the earthquake, SWC organized a meeting and directed all the NGOs and INGOs to focus on rescue and relief by stopping all other development activities. Even we asked them to allocate a certain amount of money to rescue and relief. All the INGOs and NGOs are mobilized in the rescue.

How are INGOs and NGOs involved in the earthquake management?

There are 200 INGOs and over 30,000 NGOs registered with us. I think many NGOs and INGOs are involved in rescue and relief. In one or the other way, NGOs and INGOs extended support at the time of crisis, some with cash and others with goods. Some even offered taking care of children who lost their parents. This is also a great work. In one or the other way, they supported us and their contribution is satisfactory.

How did SWC coordinate with the government and INGOs and NGOs?

After directing these organizations, we provided much needed facilitation to them including waving the customs duty on the goods they have imported for earth quake victims. SWC has appointed some focal persons to provide the much-needed support to NGOs and INGOs. We have made every effort to distribute the relief materials through a fast track and facilitate them to perform the activities. Just after the earthquake, INGOs and NGOs were confused about how to join the rescue and relief mission. Following our intervention, everything went smoothly.

How do INGOs and NGOs work in the district level?

All the INGOs and NGOs work with DDRC at the district level. Any INGO and NGO which wants to work in disaster has to work with DDRC. This is for the first time SWC mobilised all the INGOs and NGOs. We have proved that the NGOs sector is also with the government. They will abide by the government policies and programs.  Nepal Army, Nepal Police, Nepal Armed Police and Civil Servants have the capacity to work in the disaster.

Have you facilitated to bring the experts?

We have provided all kinds of support to NGOs and INGOs to carry out their relief and rescue operation successfully working under the guidelines of the government. We facilitated INGOs to bring the experts. Some INGOs brought medical teams with the recommendation of SWC.

What role can NGOs and INGOs play in reconstruction and rehabilitation?

SWC board has already taken a decision on this matter. SWC is also considering involving itself in the process. Since the SWC has a Relief Fund to support reconstruction of heritage sites and needy persons, the board has decided to release a certain amount of money. We have already called for donations for our fund. We will work in the coordination with the government.

What other programs does SWC have now?