Beyond The Relief Phase

Nepal has gone off the news headlines, the media personnel and rescue team from abroad have returned back and even the Nepalese who were involved in relief work have started getting back to their own daily lives. 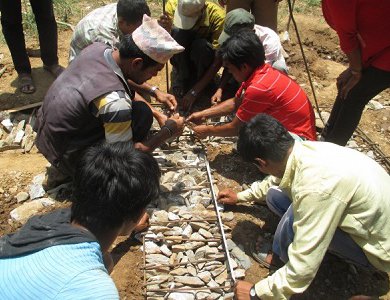 A month after the 7.8 magnitude hit Nepal, the people from severely affected districts are still struggling to get back to their lives. The people are still overwhelmed about what had happened and degree of loss that they have suffered.

The earlier phase of rescue and relief has passed. Nepal has gone off the news headlines, the media personnel and rescue team from abroad have returned back and even the Nepalese who were involved in relief work have started getting back to their own daily lives. The heroic phase after the disaster where everyone wants to help out has ended. But the woes of the ones who were affected the most has not!

The ones who have lost everything still are confused about from where to start rebuilding. Many of the settlements and villages have turned into rubble. Where to start from? Is one question that haunts many.

The past month was shocking, tragic and chaotic. Everyone acted on the impulse and did what they regarded the best for the situation. But now, it is time that we reflect upon, where we had gone wrong? Why we did not take simple measures that could have saved many lives? Why we did not plan better? And then, How we need to do things differently now? It is crucial to remember that this time – the rebuilding phase is the most important. The future of the people will depend upon how strongly we build back our infrastructures as well as the bond that existed in our communities.

It is now time to think beyond the relief and plan for a sustainable rebuilding. It is essential that this is done in a participatory way, it is the community themselves that needs to build back their lives, the outsiders can only assist. One of the ways that we can help the communities is by developing their capacities to cope better to the post-disaster situation and build back their own lives and livelihoods.

Practical Action recently conducted a three-day training called “Training on Earthquake Safety Construction for Mason” in Jyamrung, Dhading, which is one of the District which was most harshly affected by the earthquake. A total of 22 people were trained during the training, who will now be involved in the reconstruction of the structures in their localities.

One of the participants of the training opined, “I had been working as a mason from the last 15 years, but only after this training I realised that we have been doing so many things wrong. No wonder so many houses just crumbled down to pieces. Now, I am skilled to construct earthquake resilient houses.”

These skills not only help for the proper re-construction of the communities but also help in creating better livelihood opportunities for the skilled people.

Another participant, Chitra Bahadur Thakuri says, “previously, we did not know that the soil or the base of the location has to be checked before the construction of an infrastructure. We learned that construction should be done only after checking the soil. Apart from that, we also came to know about the proper processes and the thickness of the beams and pillars to be maintained for safe building construction.”

“I am going to convince people to use these earthquake resilient processes while constructing their homes. We cannot let this kind of damage happen again,” adds Chitra Bahadur Thakuri.

This training is just an example, there are many similar initiatives that can be fundamental during the rebuilding phase. People might have received immediate relief for now, but the real journey of building back has only begun.

Nepal And India Will Meet On August 18 To Discuss Development Issue By News Desk 2 days, 18 hours ago

NEICHU MAYER: Honored With Cause By NEW SPOTLIGHT ONLINE 3 days, 18 hours ago