DRAFT CONSTITUTION: In Spell Of Doom 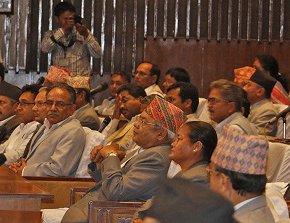 Although a few CA members attempted to disrupt the Constituent Assembly meeting of June 30, they showed their first resentment on the draft constitution by mangling it even as a large majority of lawmakers inside the august hall was thumping the desk to endorse the draft.

Given Nepal’s political situation, the new constitution prepared by CA seems heading on the path of all previous constitutions of Nepal.

Despite opposition from Madhesh based parties, chair of Constitution Drafting Committee Krishna Prasad Sitaula tabled the draft of the constitution to the full house following intervention of CA chair Subhas Chandra Nembang.

Soon after Sitaula started to read the draft, some dozens of CA members rushed towards the rostrum, mangled the draft and chanted anti-constitution slogans. However, the CA chair declared the meeting concluded before Madheshi members could create further trouble.

After the CA meeting started, lawmakers representing Madhesh based parties vehemently objected to the ongoing process of constitution drafting, arguing that this is against the Supreme Court’s stay order and against the 16-point agreement.

“The Constituent Assembly is a sovereign body and nobody can intervene in its process,” said CA chair Nembang, asking Sitaula to table the integrated draft of the new constitution.

“This is unjust against Madhesis, Janjatis and other marginalized communities. They can make the constitution with the numerical force in the CA, but that CA will be dead for us,” thundered Mahanta Thakur, president of Terai Madhesh Loktantrik Party. “The draft rejects our demands for federal structures.”

They are not the first to oppose it. Some women leaders including Hisila Yemi of UCPN-Maoist tore down the draft at the party’s parliamentary office objecting to the provisions related to citizenship. They said the provision is discriminatory and prepared by patriarchal mindset.

“Forget that 'Buddha was born in Nepal' when we glorify 'armed revolt' in the preamble of our new constitution,” wrote journalist and human rights activist Kanak Mani Dixit on his Facebook wall just after the new draft was finalized.

The four major political parties produced a draft of the new constitution, which basically doesn’t guarantee anything to anybody. Even Nepali Congress leader Prdeep Giri boycotted the house when chairman of CA declined to give him time to express his views.

Prepared by the Constitution Drafting Committee (CDC) headed by NC leader Krishna Prasad Sitaula, the draft of the new constitution is splashed with controversial statements from top to bottom.

The constitution recognizes the Maoist's Violent People’s War and all other agitations as the sources of the democratic change. The parties have the reservation over whether to give the power of dissolving the provinces to the president, whether to write pluralism in the preamble, religious freedom or secular state and whether to make Army Chief a member of security council or not. Similarly, political parties have also differences of opinion on the issue of the modalities for reappointment of judges and heads and members of constitutional bodies.

Similarly, there are differences of opinion on whether to hold the local elections by six months, whether to make the opposition leader as a member of Judicial Council, the question of property rights and reservation for marginalized and dalits.

“Of course, this is not a final document, finalization of the draft is a major achievement. It will have to pass through several other processes before voting on the draft and its promulgation,” said Sitaula.

The CA meeting was rescheduled from 2 pm to 6 pm as it could not commence on time because the draft was not ready. Finally that crucial CA meeting started at 8:00 pm.

The integrated draft would be placed on the CA’s official website, can.gov.np, for public feedback, according to the CA chairman.

A Nepali Congress lawmaker said that the CA would promulgate the new constitution by mid-July, and, if not, by the end of July.

The draft could not be presented before the CA as per the original schedule as the UCPN-Maoist, one of the four signatories of the 16-point agreement, expressed objections to some provisions of the draft constitution.

Prepared under political guidance, the constitution does not have the basic features. According to the present provisions, there is nothing that can be amended in the constitution.

As he four parties have enough numerical strength and muscle power, the CA chairman could block any move by the opponents of the constitution. If the document is promulgated without accommodating the opposition voices, the counting of the longevity of the seventh constitution will begin from the next day of its promulgation.

In a sense, Nepal has lost the chance to guarantee political stability through the new constitution once again.

NCP FEUD Beginning Of End By A Correspondent 1 week, 6 days ago