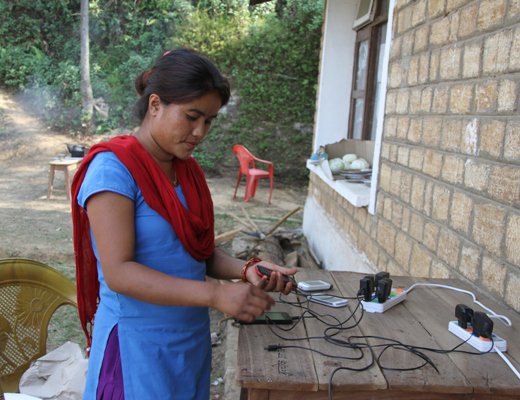 During the aftermath of massive disasters like an earthquake, life becomes chaotic. Lack of access to energy becomes one of the alarming problems immediately after the disaster as well as in the long term. Instantly after the disaster, mobile networks, phone lines, water as well as electricity supply gets cut off making people more desperate and vulnerable.  Not having electricity has its own series of consequences. Without electricity it is impossible to lift/pump water resulting in problems related to health and sanitation. Having no electricity also means having no power on the mobile phones, blocking off the very vital communication. It also means not being able to watch television or listen to radio for any news or information that could be life-saving.

As a result of the April quake, apart from other areas, the energy sector in Nepal suffered a significant damage, putting the already energy poor country more at crisis. According to Post Disaster Needs Assessment (PDNA) prepared by the Ministry of Energy, “Nepal’s energy sector has sustained loss worth NPR 18.75 billion following the April 25 earthquake and continued aftershocks.” According to the report, 600,000 households were directly affected with loss of access to electricity. The impact is either due to damage to electricity facilities, on-grid and off-grid, or loss of houses.The PDNA report has stated that various hydropower facilities with a combined capacity 115 MW out of the total installed capacity of 787 MW in the country (on-grid as well as off-grid) have been severely damaged, while facilities with a combined capacity of 60 MW have been partially damaged. The PDNA report also indicated that this will further challenge the government’s goal of universal access to modern energy services by 2030 in Nepal.

In most of the places in Kathmandu Valley, electricity came back after hours or days or a week at the most after the quake. People appreciated Nepal Electricity Authority’s effort to act promptly and do their best to repair the damaged lines and get electricity supply back to people at the earliest. But same was not the case for many of the remote villages not connected in the national grid for electricity supply but dependent on small Micro Hydro Plants. A significant number of Nepal’s Micro Hydro Plants too were damaged, putting the people of the affected areas in darkness. In Kavre district alone, six Micro Hydro Plants were totally damaged. Micro Hydro plants of the epicentre district Gorkha too suffered substantial damage at placesincluding Barpark, Gyachhok, Lapark, and Muchhok among others. The Muchhok VDC used to get the electricity supply from Jhyallakhola Micro Hydro Plantwhich got damaged and will take a considerable amount of time before it gets working again.

It has been more than two months now, the people of Muchowk have been living without electricity. “We have gone back to the old dark times. We light tradition oil lamps during the night time. But not being able to charge our mobile phones is a real problem,” says Kamala Gurung (23) who is a health professional in a local health post. “There is a backup system at the health post for the functioning of major equipment but not enough power for anything else. I have to report the status of the health post here to the district headquarters, but I have been facing problem to do so as there is no power in my mobile phone. During emergencies, I have to walk or send someone to a place with a diesel generator to charge my phone. It takes two hours to walk to that place and costsNPR 30 to fully charge a phone at a time. Life is surely difficult without electricity,” adds Kamala.

Without access to their basic energy source – electricity; many others in the community faced difficulties similar to that of Kamala. There is a team of Nepal Army security personnel camping at the premises of VDC building after the earthquake. They had been involved in rescue and relief efforts immediately after the earthquake and are still helping out the communities as per the need. This team too face challenges due to lack to electricity.

One of the officers shares, “We use many battery operated equipment but still many of other things needs to be charged. We send all the required devices and mobile phones that needs charging to be charged at a place about two hours away from here.”

Recently, an international NGO Practical Action, installed a solar powered charging system in the VDC office building at Muchowk. The 100 watt system was specifically designed for the community by experts at the organisation with assistance from a private solar company Surya PowerPvt. Ltd.

“It has been very easy for us after the installation of this system. We can easily charge our phones as well as emergency lights now. This has made carrying out our work much easier”, the officer adds.The system can charge 15 mobile phones and light 5 led bulbsfor 4 to 5 hours.

“I don’t have to walk two hours just to get my phone charged and that saves a lot of my time. I can now easily communicate with the district headquarters and report about the situation in our health post”, says Kamala.

The charging system is open to the community people, who are take turn to charge their devices. “People take turns to do the charging and give priority to people involved in emergencyservices like health and security,” says theVDC secretary of Muchowk, Bheshnath Acharya who was busy distributing NPR 15,000 to help the earthquake survivors build temporary shelters. “The charging system is definitely a great help. This will help the community stay in communication with each other with is very crucial during the time of crisis like this,” he opined. “Though it is a great help in a difficult time like this, we still face energy crisis until the Micro Hydro Plant gets repaired, and it seems like it quite some time before that.”

Without access to energy it is not possible for the poor communities to build back their lives and re-start their livelihoods.  Apart from addressing people’s other needs during the post-disaster situation, it is also necessary to give priority to energy access which is vital to help sustain their livelihoods.

Border Dispute Between Nepal And India By Dr. Prabin Manandhar 3 days, 11 hours ago