Ties With Israel Growing In Strength 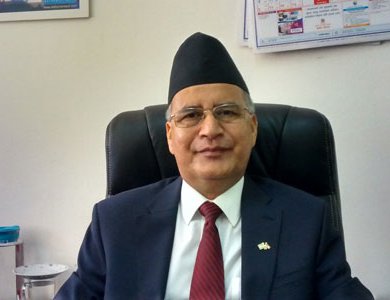 Nepalese ambassador to Israel Prahlad Kumar Prasai has spent almost three years in Israel. As Nepal and Israel are celebrating 55 years of establishment of their bilateral relations, ambassador Prasai spoke to KESHAB POUDEL in his office in Tel Aviv. Excerpts:

How do you look at the bilateral relations between Nepal and Israel?

The diplomatic relations between Nepal and Israel are historic. Our bilateral relationship was established in June 1,1960 when Nepal was under the leadership of the first elected democratic government of B.P. Koirala and Israel under the government of prime minister David Ben-Gurion, who is also the first prime minister of Israel. Since the establishment of bilateral relations between the two countries, our relations have remained cordial and friendly. In 1961, Israel opened its Embassy in Nepal to conduct the diplomatic relations. However, Nepal opened its Embassy in Isrealin 2007.

How are you celebrating the 55th year of establishment of the diplomatic relationship?

This is a historic year for Nepal and Israel are celebrating the 55th year of establishment of their diplomatic relations. We are organizing some programs to remind ourselves of the historic relations. It is a pride for us to say that Nepal was the first country in South Asia to establish diplomatic relations with Israel. Many Israelis know this fact. Thus, they always give high priority to Nepal and admire Nepal for its role.

How do you see the exchange of visit of leaders of two countries?

How do you see Israel's technical support to Nepal?

Nepal has been receiving continuous support from MASHAV, Israel's Agency for International Development and Cooperation, in the various technical fields including scholarship.

How do you see Israel’s labor market?

Why is Israel is favorable?

Israel is an open and democratic country guaranteeing human dignity and equality before law. Israel's Labor Law is also in favor of workers and employees as it is applied equally to protect rights of workers including foreign workers.

How about Nepalese young agriculture students?

Under a Learn and Earn program, more than 500 Nepalese students are studying and working in Israeli colleges. They work for five days in a week and go to class for one day. Although we have started this two years ago, Nepal government wants to continue this by increasing the number. Now students from 18 districts are here. Our plan is to bring students from all 75 districts.

How do Israel and Nepal take a common stand in international issues?

We do have a lot of common stands on international issues. However, there are differences as well. However, the areas of differences are very small compared to the agreements. Both the countries respect each other. When I do meet Israelis, they appreciate our stand. They like Nepal would to do more to support their genuine and legitimate views in the global forum.

What can Nepal gain from Israel?

Israel is known as a country making progress in technology and Nepal can benefit a lot from Israel's innovation in different sectors.  We can learn and import Israel's high tech knowledge in agriculture and water sector. Annually, almost seven to eight thousands Israeli tourists visit Nepal as trekkers.  Israel is now a member of OECD.

Since the last few years, the process of bringing Nepalese women workforce has suspended. What steps is the government taking to reopen it?

What do you see as current the state of relations?

Had Nepal reciprocated with Israel in 1961 opening Nepalese embassy in Israel, the relations would have gone in a new height directions and Nepal would have also benefited a lot in business, trade, agriculture and technological sector. However, it took us almost 48 years to open our diplomatic mission in Israel.

Have there any efforts made by Israel’s business sector to invest in Nepal?

An Israeli Computer Company named Tsunami Technology has been operating and outsourcing office in Nepal. It has been providing employment to 70 Nepalese. Recently, I also met the CEO of that company and suggested him to invest in Nepal so that Nepalese and Israelis will make benefits. Recently, I met some CEOs and discussed with them about business opportunity in Nepal in IT sector. I told them that we have qualified English speaking manpower in the country who can be assets for Israel also. Some CEOs are visiting Nepal in the coming months to see the situation.

What about Agriculture sector?

Nepal can learn a lot from Israel's experiences in agriculture sector. We are requesting the Israel government to build a demonstrative farm in Nepal to help Nepalese farmers to update with modern technology. They are positive.

How did Israel support Nepal during the earthquake?

Government of Nepal has always thanked the Israel government and people of Israel for generous support during the earthquake sending its largest team to help Nepal at the time of crisis. I am very happy to say that Israel government sent the largest rescue and relief team in Nepal by responding to our request. On the night of 25 April, Israel held an emergency meeting and decided to send search, rescue and relief team with medical staffs. Israel's Defense Force Rescue team sent 260 members with a field hospital. They also sent 60 tons of foods and other medicines. They returned on May 12 on Israel when the second earthquake hit Nepal. I was at Tel Aviv International Airport along with Israel's prime minister Benjamin Netanyahu and defense minister to welcome them. Israel's prime minister Netanyahu assured me at the airport that Israel is ready to send the team if Nepal requires it again. This shows the level of understanding in Israel about Nepal’s situation.

How do you see the response of Israel in reconstruction?

I also requested them for their support in reconstruction and rehabilitation. Israel responded positively. Accepting our request, Israel sent a delegation led by Head of Israel's Agency for International Development Cooperation (MASHAV). This was the first time Israel sent such a high delegation in Nepal's donor meeting.

How do you find the water recycling technology in Israel?

They have made a major progress in Israel's water technology. Nepal can benefit a lot in water distribution, irrigation through drip irrigation and waste water treatment.

How do you see the possibility to increase Israel's tourist in Nepal?

There is an immense possibility to increase Israel’s tourists in Nepal. Nepalese Embassy has been conducting various programs to encourage more Israel's tourists to visit Nepal. Currently, over 8000 Israel's tourists are visiting Nepal annually. We want more to visit Nepal. The Embassy organized a program last year on Mt. Everest Day inviting first Israeli Mt. Everest climber in our program. We are promoting tourism in Nepal through various programs.

We are also discussing with the government of Israel to sign an agreement to open Israel’s university for Nepalese students. Nepal government has already sent the draft of the agreement to the Ministry. There are now 50 students.

How do you compare Nepal-Israel relations now with that earlier?

Compared to that of the earlier time, Nepal and Israel's relations have now taken new heights as both the countries are coming closer to understand each other's difficulty and making common stand on many international agenda. I do see a lot of opportunity for Nepal-Israel relations to flourish in the coming decades.