The book narrates the experiences of Odd Hoftun, one of the experts of Nepal’s hydropower 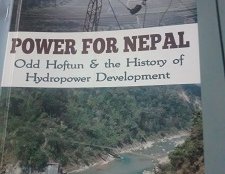 Although he was a Norwegian, Odd Hoftun spent more of his life in Nepal to promote hydropower. Living a simple life, Odd Hoftun showed Nepal a way to harness hydropower for the benefit of poor people.

Unlike others, he professed small and middle hydropower projects focusing on the locally built technologies, including turbines. He has shown in Tinau River how a small hydro power plant can work successfully. This small power project was a model in the western region which supplied the power to Butwal.

Despite immense potential of hydropower, Nepal’s hydropower was confined to the central region and in and around the Kathmandu in 1960s. Young Norwegian engineer Odd Hoftun succeeded to construct a hydropower in western Nepal.

At a time when many public and private sectors are investing in the hydropower sector, the book helps people to see how Nepal’s hydro power sector evolved in the early days.

When Odd Hoftun started the construction of Tinau Project near Butwal, India had started to build Trisuli Hydropower Project with 19 MW power. However, Odd Hoftun not only built Tinau Hydro but also helped to build technical training institute to transfer the knowledge and technology of hydro power development.

Thanks to the establishment of the Technical Institute, Nepalese learned the technology of small and micro-hydro. “Based on Norway’s history and development, he built up the power industry in Nepal in an unparalleled manner. Innovative, committed, determined , he provided power and water to hundreds of thousands of the poor in Nepal, and contributed to pushing the country into the future. His basis was an unshakeable belief in the human ability to help themselves. Hoftun’s life and Nepal’s development are inextricably linked with each other,” writes Erik Solheim, former minister of environment and development, Norway.

After completion of Tinau Hydropower, Odd Hoftun decided to go for Andhikhola Hydropower and then Jhimruk. With the vision of Odd Hoftun, a number of companies, Butwal Power Company, Himal Hydro, etc., were established with UMN as a main stakeholder.

With the rich collection of experiences of Odd Hofutn, the book represents the history of Nepal’s hydropower development.