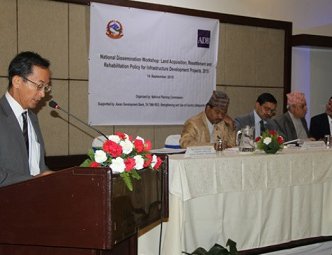 At a time when the government is facing many problems in land acquisition in the construction of big projects, National Planning Commission has unveiled the Land Acquisition, Resettlement and Rehabilitation for Infrastructure Development Project Policy.

In the absence of the land acquisition policy, many infrastructure projects, particularly the transmission lines and hydropower plants, had issues.

Although the land acquisition policy aims to address the hurdles and confusions in the construction of infrastructure projects, stakeholders have criticized it as incomplete and more problematic.

Some of the major transmission line projects were withdrawn as the new land acquisition policy would create more problems in the coming days.

“Since Nepal Electricity Authority is unable to push new transmission line projects due to the dispute on land acquisition, the new policy is likely to create more problems in the coming days,” said Kanhaiya Kumar Manandhar, Deputy Managing Director, NEA’s Grid Directorate. “Land acquisition is one of the major hurdles to implement infrastructure projects in Nepal. Instead of giving a way out, the policy adds more clauses in the already complex issue.”

Organized by National Planning Commission in cooperation with Asian Development Bank, senior officials from the government entity, including the ministry, have raised several questions about the policy. They suggest making land acquisition policy development friendly.

As the country has been facing severe crisis of land acquisition for the projects, the participants criticized the Policy of Land Acquisition, Resettlement and Rehabilitation for Infrastructure Development Project saying that it is likely to create many hurdles in the future.

“If this policy is implemented without amendment and change, land acquisition will be very difficult. The policy adds many clauses in the course of negotiations and settlement,” said Manandhar. “If we follow social guidelines given by the policy, we cannot acquire any land in future for transmission.”

Manandhar is not alone. Other senior officials from Nepal Electricity Authority, which is facing a lot of problems in land acquisition for transmission lines, suggested removing some of the clauses included in the policy.

“This policy is the first of its kind to deal with the complex issues of land acquisition. As it involves so many issues, there is the need to consider all these before planning the projects,” said vice chairman Pokharel. Kenichi Yokoyama, Country Director, Nepal Resident Mission, ADB, said that the views expressed in the workshop will help to improve the policy.

As Nepal’s Land Reform Act has many flaws and regulations do not permit government institutions to negotiate directly with land owners and middlemen, people always oppose the price set by District Administration Office.

Unlike the private sector which can deal directly with the landowners and acquire land through direct negotiations with land owners or through middlemen, disputes were rare. This is not so with public companies. Land owners and middlemen see the public company as an agency to charge more compensation.

Joint Secretary of MoLRM Nagendra Jha presented his views on Land Acquisition: Issues & Challenges. “As we are in the process of amending the Land Reform Act, it is likely to make the land acquisition easier for the public sector,” said Jha.

The policy is divided in 19 headings, covering the criteria for compensation, strategic policies, land acquisition and handover of ownership. Similarly, the policy also makes institutional arrangements with formation of acquisition and compensation determination committee, resettlement and rehabilitation, problems and concerned management and central monitoring and evaluation committee.

The policy also touches economic side, legal system, technical guidelines, monitoring and evaluation, risk and update policy. Strategy and working policy, acquisition of land to companies and stopping the use of public land are also covered.

Nepal And India To Give Priority To Butwal-Gorakhpur Transmissionline By NEW SPOTLIGHT ONLINE 2 days, 22 hours ago

UNHCR Shut Down Its Bhutanese Refugee Office In Nepal By Agencies 3 days, 13 hours ago