Despite participating in the election of the prime minister, Madhesh based parties are showing no signs that the blockade in the border points will ease any time soon 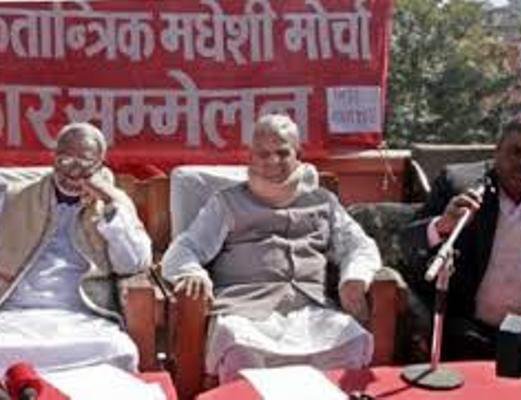 With the decision of Madhesh based parties to take part in the elections of prime minister, there is a wave of disenchantment of the people within Madhesh. Some agitators even burnt the effigy of the Madheshi leaders.

Nepal Sadbhavana Party leader Sarita Giri, along with many district level leaders, quit the party expressing anger over the decision. “Parties have lost their moral ground by taking part in the constitution which they have burnt as discriminatory,” said Sujit Jha, a youth from Janakpur, where last week former Maoist leader and former prime minister Baburam Bhattarai was kept off from addressing the Madhesis.

With Bijaya Kumar Gachchhadar joining the government, his district party leaders in Parsa, Bara, Rauthat, and Dhanusha have tendered resignations en masse. Many other district level leaders of Madhesh based parties are quitting as well.

Although there is some ease in the customs points in Jogbani and Kakarbhitta in the east, Sunauli in the west, Rupedia in mid-west and Gauriphanta and Gadda Chauki in far west, the main customs point in Birgunj, which handles over 75 percent of export and import of all products, including petroleum, is yet to open.

“Our participation in the elections was to strengthen the cause of Madhesh and seek broader support from Nepali Congress,” said Sarbendra Nath Shukla. "The constitution is not fully implemented as the government is still run under the transitional arrangement or interim constitution.”

With more than two months of blockade at border areas, Nepalese have learnt where their lifeline is attached. However, the mainstream political parties are yet to realize it.

Prime Minister K.P. Sharma Oli and his cabinet directed Foreign Minister and Deputy Prime Minister Kamal Thapa to hold negotiations with India to resume supplies. But his party and government has maintained silence over the demands put forward by the Madhesh based parties and Madheshis.

If K.P. Sharma Oli and his team failed to understand the changing dynamics of Madhesh and just squarely focused on India for crisis, the situation will complicate further.

With the exposure to the world, particularly through foreign labor market, youth in Madhesh are different today than they were decades ago. According to statistics, seven districts in Terai, namely, Dhanusha, Saptari, Siraha, Mahottari, Sarlahi, Rautahat and Bara send the highest number of people to the Gulf countries and Malaysia. Similarly, Dhanusha receives a high amount in remittance from outside Nepal.

According to Ministry of Labor and Employment, over a million people from these districts have the exposure to foreign employment. Ignoring their aspirations and needs will further complicate the situation in future.

“The time has come for the government to address our demands and rewrite the constitution,” said Shukla. “ Sense will prevail in prime minister K.P. Sharma Oli, whose rigidity had put the country into crisis.”

Given the present state of affairs, the government making and power sharing, Madheshi’s agenda for rewriting or amending the constitution is not a priority of the ruling alliance. This will give more space for radicals in Madhesh and weaken further moderate parties and leaders.

Madheshis and Tharus are demanding new provincial borders, provisions in citizenship and inclusion to correct major flaws in the new constitution. “ I would continue my fight for Madhesi empowerment and protection of human rights and crusades against discrimination,” said Giri.

Nepal’s economic sector has already received severe blow. Oli’s performance will now be tested in how he can handle the Madheshi agenda and India’s concerns at the same time, helping to open the lifeline of the country. The sooner the prime minister can make a breakthrough, the better is for Nepal and the Nepalese. For this, Oli has to change his old mindset on Madhesh and India.