Life in Nepal is intimately related with festivals. Its comparison cannot be made with the religious or cultural festivals of Europe, which, for example, last most of the time for one day, but are far from the local fervor. 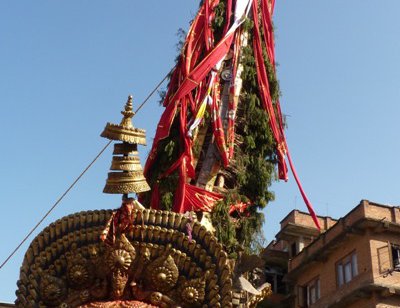 Life in Nepal is intimately related with festivals. Its comparison cannot be made with the religious or cultural festivals of Europe, which, for example, last most of the time for one day, but are far from the local fervor. In Nepal, nearly every week sees a celebration happen, and it is to remind that this profusion of diverse popular events dedicated to Gods are linked with the faith of a country.

Religion is obviously the cornerstone of these public and private reunions, but these last-mentioned are embodied in plethora of forms of ritual and worship. Moreover, these festivals stand in a national, regional, or simply local place, which imply that no one in the public sphere seems to be able to give the exact numbers of festivities of the country in a year, and this appears as absolutely normal. Every citizen of the country will live and feel this festival from a very personal perspective, and the scope of a festival isn’t related in any case with its national fame. For example, Rato Machendranath takes place every year in Patan as a strictly local festivity, running exceptionally at the moment as it was reported when the earthquake occurred but normally in April-May. In spite of the anecdotal nature of the festival in the scale of the whole country, the ritual's majesties (some would say immoderate) lie in being one of the longest festivals in the world.

Volunteers and festival-goers make it run for the length of the event, i.e. two to three months, notably during the khat jatra, which consists in manually pulling across the city a 52-feet-tall chariot with ropes and a lot of will power, in honor of Machendranath, goddess of rain, to ensure fertile precipitations during the near-following monsoon.

This part of life settles in the temples and in the streets. It means that the public life simply takes place in public locations, and this kind of simplicity has not been conserved in every country of the world. In the example of western countries, social aspects of existence would occur in private and defined places, at restaurants and cinemas. But in the very case of Nepal every festival has kept its most religious aspect in free-access-to-all temples, before the festivities then move (and stay) in the streets, privileged for joy demonstrations, dances, songs for example, in Deepawali Festival. Notion of time isn’t taken in consideration, because these festivals happen, are observed by themselves. As a result, everything will be brought into play for the necessary and appropriate devotion for the smooth run of this festival, without anything else in consideration. For Teej Festival, women in sari who have not eaten anything for the day will simply wait to enter the Pashupatinath temple, even if they have to be patient for four hours. During the Machendranath Rato Festival, which will last for two or three months, the only imposition will be to complete the journey of the carriage across the city.

The manner to live the festival from a personal way could be distinguished in two aspects: the public, and the private. In the collective gathering, social interactions are not made of common consumption, but common celebration, intended for Gods and Goddesses: the crowd unites in worships and expressions of joy. Every house shelters a little, personal temple, and each day is the occasion to honor one God, but festivals will put this adoration in the public sphere, festivities are the occasion to transport its own faith in dedicated temples.

But festivals are also made of familial meetings, and bring these concepts of share with family and love dones, in a movement back to closest relatives: this phenomenon reveals the importance of celebrations by the scope of punctual change means it will involve.

If people of Nepal pray every day (thing they consider as a duty), in the home temple, worshipping idols, if they read every day a piece of holy texts, festivals are the occasion to prepare better meals with healthier food, to give tika and some money from elder ones. Family then is related with religion, and as Dashain is not so far yet, religion permits it to gather, one or two times a year.

Dashain, beginning in a few days, celebrated for the first time since the earthquake, will then have more of this power to federate people of Nepal, rising again from catastrophes.

The most important festival of the country, freezing the whole country devoted to these two weeks of worshipping, shines by the amount of sacrifices every year dedicated to Bhairab. Hundreds of thousands of animals are offered to the blood-thirsty divinity, but contestations begin to rise. Associations of protection of the animal focus on cruelty of the gesture, and the people seem to think differently about this type of traditions: more and more believers begin to buy meat in but chery instead of taking it directly from the animal, or they eat less food from animal origin.

In a way, tourism can’t be another way that violently be inserted in the middle of the multiple of celebrations, but tourists themselves may have been traveling to Nepal for these very moments. The strength of traditions and the attachment to this cultural whole attract tourists which see in here notions of exotic and change of scenery, in a frame of a ubiquitous spirituality. However, this ritual doesn’t mute in a vast play for the traveler : in a 2010 publication, Religious Festivals, Between Public and Private Globalization : Tourism and Mimesis among North Nepal’s Sherpa, Lionel Obadia explains that if Sherpas are from an European perspective, brave  and  robots  alpinists, amiable  and sociable  representatives of  pre-moderns  societies, the performance of their main festival in front of this foreign audience is the best way to affirm their sherpahood , precisely in the surroundings of the monastery, maybe the main site of the representation of an westernized form of the authenticity, harmony, and cultural unity of the Sherpas . Tourism he writes, has been targeted for being the origin of a corruption of cultural habits, but Buddhists festivals are, quite the opposite, illustration of these phenomena of cultural revitalization , and with the exposition to these external influences Sherpas have not become Occidentalized , but reinforced by contrast of their own identity. In a more general way, Nepali people are confronted to foreign arrivals in the exercise of rituals, but it may be the occasion to strengthen and attachment to their culture.

From an internal point of view, politics seems to have no interaction at all with these festivals, and this for several reasons. Nepal hasn’t a state religion, but celebrations could be the place of a play for personal political interests. But this lack of political, financial interference could remain by the simplicity of the living of these festivals. Nepalese live festivals as they live their faith, i.e. in a direct link with their beliefs. This simplicity would act as a shield for any external invasion , but if politics and festivals look as not linked; they may in fact be clearly distinguished, even more since the end of monarchy. Hindus texts postulate, in sociology of India, a superiority of the Brahmin priest on the ksyatriya king, and establish a separation between spiritual and decisional instances. Royalty then wasn’t, as many of other societies, a magic-religious function as much as a political one. In Indra Jatra, it was even the Kumari who was supposed to give her power to the king (and Prithvi Nârâyan Shah, conquering Kathmandu, was blessed by the Kumari instead of the king). And as the regime became democratic, the distinction may be deeper.

This political absence, combined with the integrity of celebrating people in front of foreign elements, they don’t try to impress or even imitate, make traditions and cultures still strong and omnipresent. In a difficult time, festivals represent an occasion to gather and pray with relatives and loved ones, and like Newar is reconstructed after each of the earthquakes temples in the exact same place, Nepalese will rebuild their belongings to perpetuate what makes them feel living this country.

(He is an intern from France.)