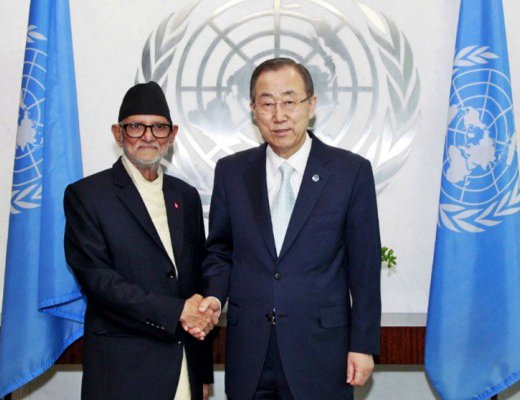 During his meeting, former prime minister Koirala reportedly told Secretary General that Nepal has been able to bring out an inclusive democratic constitution written by people's representatives through an elected Assembly.

Koirala said that Nepal considers the United Nations as the custodian of the principles of sovereign equality of all nations. “We look to full understanding of Nepal's sacrifices for democracy and contributions to the liberal democratic order from the international community. We want our friends to appreciate difficult circumstances and complex geopolitics that we are working within these times,” said Koirala.

According to a press release issued by his office, Koirala told the Secretary General that it has been a matter of great satisfaction that political parties with violent past, non-democratic, and non-constitutional behaviour have come under democratic umbrella. He said that everybody becomes a winner in democracy and the biggest challenge now is to institutionalize this peaceful behavior and strict adherence to the provisions of the constitution and rule of law.

Former prime minister Koirala said that his desire is to see the solution of current challenges in the plains in a democratic manner.

Koirala thanked the Secretary General for support and solidarity following the devastating earthquake in April. Nepal is working hard to address pressing challenges of reconstruction and rehabilitation of earthquake victims.

He also told the Secretary General that at a time when Nepal with constitutional democracy would have been an asset for our neighbors and the world to direct all efforts for development and uplifting people's living standard by utilizing Nepal's huge natural resources for common benefit.

Former prime minister Koirala expressed that his party is extremely sad to see the Indo-Nepal relations taking this undesirable turn following the promulgation of an inclusive democratic constitution.  The current situation that emerged as Nepal advanced towards constitutional democracy remains inexplicable.

“We are extremely worried about the divides being created between hills and plains and among diverse ethnic groups in Nepal. Diversity is our strength and national identity. We are fiercely proud of this strength.  We are determined to the preservation and protection of national integrity and interests within a democratic framework,” said former prime minister Koirala.

He expressed his concerns about the likely growth of radicalism in the country if people's sufferings and hardships continue.  This will not be in the interests of anyone. South Asia remains the worst victim of terrorism, and violent extremism that will complicate the security scenario in the region and beyond.

“It is unthinkable to find our most generous neighbor India, which came to our rescue within hours of devastating earthquakes in April silently looking at the obstructions and disruptions of the most essential supplies at the border that have crippled Nepal's economy, paralyzed social life forcing the closure of schools, and halted our reconstruction efforts and rehabilitation of earthquake victims,” said Koirala.

“The effect of border blockade has been more pervasive and lasting than the devastating earthquake of April 25 and subsequent aftershocks. Damage from the earthquake was assessed to the tune of US $ 7 billion under Post Disaster Needs Assessment. It is estimated that the cumulative loss from this action of obstructions and disruptions far significantly exceeds that amount. Pushing Nepal into the most serious humanitarian crisis in Nepal is not in the interests of any one,” said Koirala.

He underlined the need for Nepal's unhindered right of free transit, and appreciated the UN position on this. Nepal deserves better treatment as  one of the poorest, landlocked and least developed countries that formulated a democratic constitution through an endogenous process by following an internationally approved democratic routes.

UN Secretary General commended the role and leadership of Koirala in the constitution making. He lauded his contributions to the democratization of Nepal and conclusion of the peace process. Secretary General expressed his concerns at the obstruction at the border. He also voiced his concerns over the delay at the setting up of National Reconstruction Authority. He also suggested to accommodate the demands of dissenting parties through a democratic process.

Koirala is in New York in connection with his follow up check up of his health.

150 Plus Nepali Migrants To Arrive From UAE Tomorrow By NEW SPOTLIGHT ONLINE 11 hours, 56 minutes ago

Lunar Eclipse On June 5 And 6: Strawberry Moon, Time Of The Eclipse Duration In Nepal By NEW SPOTLIGHT ONLINE 13 hours, 23 minutes ago

SEE,11 And 12 Exam Decision Within A Week: Minister Pokharel By NEW SPOTLIGHT ONLINE 13 hours, 36 minutes ago

Nepal Reiterates Its One China Policy And Considers Hong Kong As An Integral Part of China By NEW SPOTLIGHT ONLINE 1 day, 12 hours ago