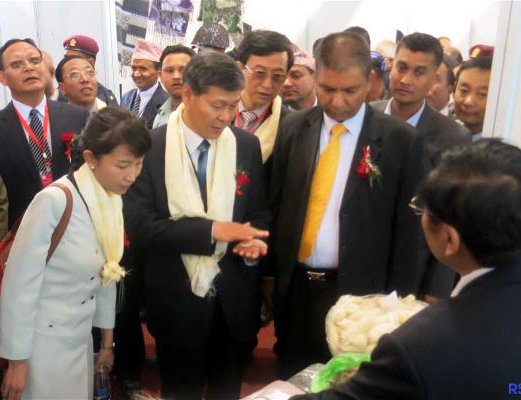 As Nepal is the only foreign country to have a direct road connection with Tibet, with Nepal having another route to go outside, there is a win-win situation for both the countries.

This is how both the countries are benefiting from the bilateral trade. With the linking of railways up to Sigatse from mainland China, the volume of trade between Nepal and China jumped many folds recently.

However, the devastating earthquake of April and subsequent aftershocks destroyed Nepal-China border points, including many portions of roads, disrupting the trade.

As Nepal is in the process of revival and blockade in Southern plain, organizing Nepal China-Tibet Economic and Trade fair had its own significance. After import of oil from Kerung, another trade point between Nepal and China’s Tibet; it opened a wider possibility to increase the bilateral trade.

Jointly inaugurated by Secretary at the Ministry of Commerce and Supplies Naindra Prasad Upadhyay and Dong Mingiun, vice-chair of Tibet Autonomous Region of China, the trade fair has different stalls comprising handicrafts, medicinal herbs and electric products manufactured in both countries on display.

Electric products including induction cookers and electric motorbikes are the main attractions of the fair. These items are being showcased as per the current need of the Nepali market, the Chinese side said.

These kinds of fair have been organized every two years since 1990 under the coordination at the government level. The Chinese side has informed that they have brought different goods worth 4.7 million yuan for this year’s fair.

“Nepal has been getting significant support from neighboring country, China, during other times, including at the time of the earthquake,” said Secretary Upadhyay. “Chinese investors can come to invest in agriculture, hydropower, tourism and other infrastructure development sectors of Nepal.”

Highlighting the importance, Vice-Chairman Dong expressed the hope that the fair would also help strengthen the relations at the public level. “Nepal-China Tibet friendly relations were established around a decade ago. This kind of fairs would further contribute in providing modernization to traditional trade existing between the two countries since long as per the changing times.”

According to the organizer, the Trade and Export Promotion Centre under the Commerce and Supply Ministry, a total of 52 stalls from China and 22 from Nepal are showcasing a wide range of products at the event.

Betty Liu, vice-general manager of Tibet New Summit Motor, said that they were trying to set up an outlet in Nepal. “I think now is the right time to sell electric bikes in Nepal as people are struggling to get petrol. We are looking for a local distributor, and we will start supplying electric and other bikes in the country,” she said, adding that there was a great potential for electric bikes in Nepal.

The bilateral trade volume increased on average by 43 percent annually for three consecutive years and hit a record high of 1.94 billion yuan (316.67 million US dollars) in 2013, according to official statistics.

In August 2015, Chinese companies had signed a deal worth of 3.3 billion US dollars with Nepal for the rehabilitation and reconstruction works of Nepal.

New Silk Road was started in 2013. It is for promoting economic cooperation and strengthening peace among the nations, the Road and Belt concept will also enhance passage to various countries for the betterment of the people. No doubt, Nepal is also one of the very important countries on this One Road One Belt project.

Chinese too agree that Nepal-China trade indicators are ascending towards imbalance. China recently issued zero tariff policy for 70 per cent of the Nepalese goods to promote Nepal’s trade with China. China has already repaired the road on its side near border to make access easy.

Given the present trends, Nepal China-Tibet Trade fair is very significant and it will have a long implication for the bilateral trade and diversification of trade between the two countries.