Showing generosity and long tradition, the United States has resettled over 90,000 out of 100,000 Bhutanese refugees 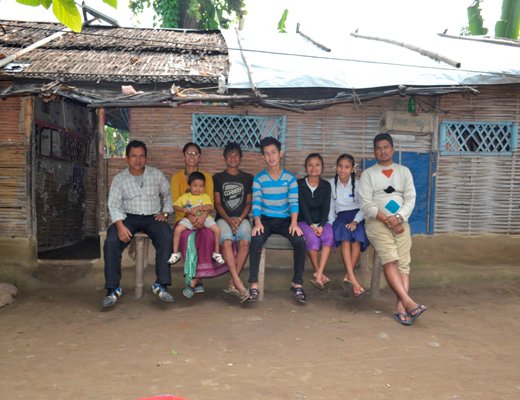 Fifty-three-year-old Devi Maya Thapa represents the 100,000th refugee to be resettled from Nepal. She, along with her husband, children and grand-child, will depart for the state of Ohio in the United States in early December.  This three-generation family will join Devi Maya’s siblings, and over 84,800 other Bhutanese refugees who have started new lives in the USA.

“I am leaving the refugee camp forever after spending more than two decades in Nepal. I am happy that our family will be together in our new country and that my children will have a better future,” said Devi Maya.

Her son Bhupendra and daughter-in-law Nara Maya have both been deaf and mute since childhood. “Life in the refugee camp has always been difficult and physical disabilities added more pain,” said 25-year-old Bhupendra. "I am happy that I am finally going on resettlement. I will be able to learn new things, have more opportunities and lead a happy life.”

U.S. Ambassador to Nepal Alaina B. Teplitz, along with Prime Minister Khadga Prasad Sharma Oli and representatives from the United Nations High Commissioner for Refugees (UNHCR), the International Organization for Migration, and seven other countries, congratulated the 100,000th Bhutanese refugee departing from Nepal for resettlement abroad.

In a special ceremony with Chief Guest Prime Minister Khadga Prasad Sharma Oli, Ambassador Teplitz thanked the government and people of Nepal for generously welcoming Bhutanese refugees for over 20 years, and facilitating their travel to the United States and other countries.  “For our part, the United States has welcomed over 84,500 Bhutanese refugees.  We are a nation of immigrants, and have the largest refugee resettlement program in the world,” said Teplitz. “In the continuing spirit of the resettlement effort, we support the Government of Nepal in its collaboration work with the international community to find a path to self-sufficiency for the expected 10-12,000 Bhutanese expected to stay in Nepal.”

Eight years ago, some 108,000 refugees from Bhutan were living in seven camps in Jhapa and Morang districts in eastern Nepal.  Today only two camps remain and the refugee population now stands at less than 18,000.

After hosting the Bhutanese for almost two decades in the refugee camps in eastern Nepal, the camps have almost come to a closure.

As UNHCR, the UN refugee agency, and the International Organization for Migration (IOM) are marking a major milestone, over 100,000 Bhutanese refugees have been resettled from Nepal to third countries since the launch of the program in 2007.

“This is one of the largest and most successful programs of its kind and the resettlement of nearly nine out of 10 Bhutanese refugees is an extraordinary achievement,” said UNHCR Representative Craig Sanders.  “Eight years ago few would have envisioned we would reach this milestone.  We give credit and thanks to the resettlement countries, the Government and people of Nepal, the refugee community and our NGO and UN partners with whom we have worked for over two decades.”

The Chairperson of the Core Group of eight resettlement countries, Australian Ambassador to Nepal Glenn White said, “Australia is proud to have played a part in this highly successful resettlement program.  The departure of the 100,000th Bhutanese refugee is a demonstration of the strong humanitarian cooperation between the eight resettlement countries, Nepal, UNHCR and IOM.  I look forward to continued cooperation among the Core Group, Nepal, and our partners in seeking resolution for the Bhutanese refugees who yet remain.”

IOM Nepal Chief of Mission, Maurizio Busatti, stated, "Reaching the 100,000th resettlement is a remarkable success, it shows how strong the partnership among all actors has been. Most importantly, we honor the courage of these women, men and children in building their future in a new land, as well as the generosity of those who welcomed them at the other end.”

As resettlement reaches its end, it is estimated that around 10-12,000 refugees will remain in the camps in Nepal. UNHCR, together with IOM and the international community, will continue its efforts to achieve comprehensive and lasting solutions for the remaining population.

“Resettlement is sometimes life-saving, but always life changing. Resettlement offers not only international protection but also a path toward social and economic integration in new host societies. Resettlement has provided 100,000 Bhutanese with the chance to recover and a renewed sense of purpose in life. This deserves to be celebrated.None of this would have been achieved without the open hearted hospitality of the Government and people of Nepal. Nor would it have been possible without the generosity of Australia, Canada, Denmark, the Netherlands, New Zealand, Norway, the United Kingdom and the United States -- all of whom continue to support refugees in need,” said IOM director IOM Director General, William Lacy Swing for“Marking the Resettlement of 100,000 Bhutanese Refugees.”

“This would not have been possible without thegenerous hospitality of the government and people of Nepal who have hosted refugees from Bhutan for more than 20 years. I am also deeply grateful to the eight countries that offered resettlement places, to our NGO and UN partners who have supported refugees for two decades, and to IOM for the excellent collaboration in resettlement processing,” said UNCHR country representative.

According to UNHCR, more work remains to be done to find solutions for the 10-12,000 refugees who we know are not expected to resettle. Refugee camps cannot be maintained indefinitely, and all stakeholders must now work together to bring this situation to a sustainable end. Nepal has shown that solutions can be found when compassion and cooperation are bolstered by international solidarity,” said AntónioGuterres UN High Commissioner for Refugees in his opening remarks for“Marking the Resettlement of 100,000 Bhutanese Refugees.”

As Bhutanese refugee crisis is close to ending, one of the world’s most protracted refugee situations has become one of the largest resettlement operations in history.