Despite several rounds of talks between the leaders of agitating parties and the ruling alliance in the last one hundred days, no sign of early settlement is seen for Nepal’s current political crisis to end 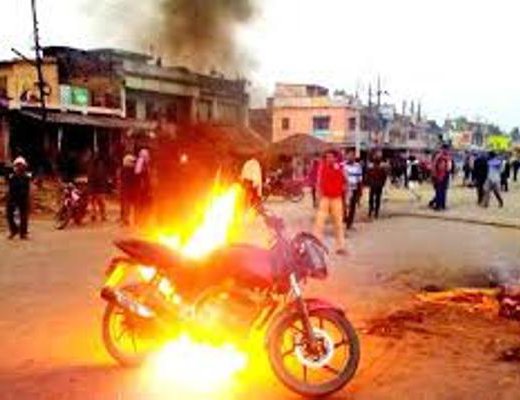 As MadheshiMorcha leaders are hardening their stand and ruling alliance leaders are diverting their attention from Madheshi agitation to nationalist slogans, pointing at the border point blockade as the reason behind the present crisis, the agitation in Madheshis likely to intensify and the possibility of finding a solution is unlikely any time soon.

Following the violence in Rajbiraj on 18 November,with the death of four Madheshi agitatorsand injury to dozen others, the agitation heated the chilly morning of Nepal’s southern plains, widening the gap between the Madheshis and the ruling parties. At a time when Madheshi agitating parties have made it clear that boundary of provinces is their bottom-line for agreement, any consensus among the four main political parties on changing the current boundary will be unlikely.

United for the promulgation of new constitution, three major political parties Nepali Congress, CPN-UML and UCPN-Maoist, which hold two thirds of majority in the House, the pre-requisite for an amendment to the new constitution, have differences that generate uncertainties.

UCPN-Maoist leader Pushpa Kama Dahal has been making efforts to ink a package deal with the agitating MadheshiMorcha  parties. He has held several rounds of talks with the senior Madhesi leaders.

Although India has been denying that it has imposed any kind of blockade in Nepal, leaders of three major political parties, including fringe communists and Nepalese Diaspora living in different parts of the world, have been staging demonstrations blaming India for the present humanitarian crisis.

A group of intellectuals, including former secretaries and people representing various walks of life, handed over a memorandum to prime minister K.P. Sharma Oli, demanding a probe on the citizenship cards issued after 2006 and internationalizethe Indian blockade. Handed over byBuddhi Narayan Shrestha, the memorandum was signed by twodozens of Nepal’s prominent personalities, including former minister, water resource experts, former diplomats and bureaucrats.

In public debates, Indian ambassador to Nepal Ranjit Rae has been consistently saying that Nepal’s current humanitarian crisis is the result of Nepal’s internal political problems in Madhesh. The Indian ambassador argues that once the government and Madheshi front arriveat a compromise and disturbance in Nepal eases, the flow of goods from India will resume.

As the agitators are staging demonstrations at the no man's land in Nepal-India border atBirgunj-Raxaul point of the main supply line for Nepal where 70 percent imports pass through, no increase of supply from other border points, even a hundred percent, can make up for the disruptions.

Whether one likes it or not, Nepal’s current problemswon't end without India’s goodwill. “As India played a crucial role in ending the twelve years long Maoist insurgency, India’s support is necessary to end the Madheshi agitation as well."

As essential commodities, including life saving medicines,are in short supply, there is a growing concern aboutthe possibility ofa humanitarian crisis. The pressure is mounting on the government to make necessary arrangements. Even United Nations and diplomatic communities have been issuing statements showing their grave concern about the situation. The task of rebuilding housesof over 8 million people destroyed or damaged by the earthquakesof April and May 2015 has already gotten stuck up. Thedifferences among the three major parties overthe constitution of a high powered National Reconstruction Authority has complicated the matter.

With over three months of blockade and border disruptions now, Nepal’s economy has also suffered badly. According to the white paper issued by Ministry of Finance, Nepal’s economy will grow negatively. The Ministry revised the economic forecast, downgraded projection from early 4 percent to just over 2 percent growth.

Given the present crisis, the government has four options. The first would be to agree on Madheshi demands or go for a status quo, giving up on all disputed issues. Or, declare a state of emergency, mobilize security forces in integrated manner in terai,and restore law and order problem. The government can also maintain the present status quowhile encouraging the locals to rebel against the agitators.

Given the looming humanitarian crisis, the government options are very limited --the only way to settle the disputes is through peaceful means. Declaring state of emergency and mobilizingarmy will risk escalating violence. If violence escalates, human rights will be violated. As Nepal’s security forces are under scrutiny of national and international rights organizations for their records duringthe Maoist insurgency, it is unlikely that they will take the risk to jump, as in the past, in any internal political conflict.One of the other weaknesses of the present government is that it is dominated by communists.

As Nepali Congress is likely to oppose the unilateral move onamendment of constitution, the process will be lengthy and the government will be unlikely to find a quick solution through this process.

Whatever move the government will make, the first thing it is likely to do is to end the current session of Legislature Parliament. With the president, whois vested with enormous power to clear the constitutional difficulties under Article 305 on removing hurdles, the government may opt to exercise this right.

Only under article 305 of removing hurdles, the government can announce any agreement on constitution. Although any announcement made under this article is subject to ratification by two thirds of Legislature Parliament.Given the past, it will be difficult for other parties to oppose any settlement signed with agitating parities.

The only way out for the government to end the present internal political crisis is to announce the status quo on provinces and other controversial issues as demanded by Madheshi agitators in a package. This is a very difficult proposition given prime ministerOli’s own and his party's stand. If the present stalemate continues for a few more days, anti-government and anti-constitution moves might emergein the directing of bringing unimaginable consequences. The future of this constitution will depend on how the government tactfully and carefully handles the situation.