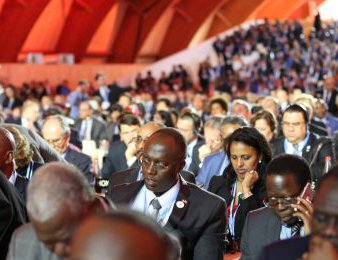 As Paris COP 21 is prepares the final negotiations to reach an agreement, Least Developed Countries, including Nepal, are pushing for a legally binding agreement to safeguard their interests from the effects of climate change.

With negotiators from more than 190 countries attending the Paris climate conference, LDCs negotiators are advocating for a fair deal for the world's poorest countries through UN Framework Convention on Climate Change (UNFCCC) (COP21) in Paris.

According to IIED, LDCs have stressed the need for a transition to tackle climate change and eradicate poverty by 2030. For the world's Least Developed Countries (LDCs), the outcome of the Paris climate talks (COP21) is crucial. Their people are among the most vulnerable to the changing climate that is affecting lives and livelihoods. In response, many of the world's poorest countries are pushing ahead with low carbon development plans, and projects are in place to help communities with adaptation to climate change.

The Least Developed Countries have contributed little to the global tally of greenhouse gas emissions, but many have submitted plans ahead of the United National Framework Convention on Climate Change (UNFCCC) Conference of the Parties in Paris (COP21), detailing their intended actions on climate change

With seven in 10 people in Nepal dependent on agriculture for their livelihoods, there is a need for emergency action as well as longer term solutions, such as investment in the promotion of more resilient farming techniques.

Bishwendra Paswan, Minister of  Science, Technology and Environment,  warns that a 1.5 degree target for warming is needed for the LDCs because adapting to a two-degree rise is not affordable. "It should not be between the rich and poor. All of us must come together and play our bit to fight climate change and limit global warming."

Representatives of more than 190 countries are gathering in Paris to negotiate an agreement on how to combat global climate change. A key issue is whether the talks will result in an agreement that is legally binding.

The Durban Mandate (PDF), which was agreed by the 2011 COP, asks parties to negotiate an agreement which is legal in nature, and which is applicable to all parties and which covers all thematic areas of the climate change regime.

What does 'legally binding' mean?

A legally binding agreement implies an agreement adopted under the Vienna Convention of Law of Treaties. The document can be a treaty, a protocol or just an agreement.

What is most important is when one looks at the agreement whether it is legally binding or not, is the obligations within it and the provisions to actually enforce those obligations.

Obligations for conduct means parties will have obligations to communicate a pledge on mitigation, on finance and even on adaptation, and maintain that pledge over time to realise their mission. Another key element will be rules around transparency of action, as well as rules around accountability.

Some parties do not want the strictest enforcement mechanisms. They want to have non-punitive, non-judicial, non-intrusive, facilitative mechanisms to ensure compliance.

A spokesman for the Least Developed Countries in Paris said, "The Copenhagen climate meeting made it clear - climate finance should be new and additional funds, which means it should not come from foreign aid - which is meant for development."

Global climate change talks in Paris moved into a new, tougher phase as negotiators agreed on a draft accord, albeit one that still leaves hundreds of points of dispute for ministers to resolve.

While a largely procedural step in the four-year quest for a binding deal to slow global warming, the fact that senior officials from almost 200 nations agreed on a draft marks an advance over the last, failed summit in Copenhagen six years ago.

French Foreign Minister Laurent Fabius warned that much work lay ahead to reach an accord by the end of the conference on Dec. 11 that will bind both rich and poor nations to combat global warming beyond 2020.

The top delegate from China, Su Wei, said the first week of the talks "though very difficult, have produced very good results and provide a strong foundation for next week".

Negotiators have left them 939 pieces of bracketed text representing varying options for resolving disagreements. Some developing nations want to phase out fossil fuels by 2050, for instance, but China, the biggest emitter of greenhouse gases, is among those preferring to promise merely to shift to a low-carbon economy this century.

An agreement at the U.N. summit on the outskirts of Paris is expected to represent by far the strongest global accord yet to commit both rich and developing nations to curbing the rise in the emissions responsible for climate change, even though officials say it will not be enough to prevent global temperatures rising beyond a dangerous threshold.

An accord will not define specific measures or targets, which are being undertaken at a national level. But it should create a legal framework on key issues such climate finance for developing nations, beyond a goal of $100 billion a year already set for 2020, and set a long-term goal for the shift from fossil fuels.

The text, running to 43 pages, including a 21-page core agreement, leaves most of those issues to be worked out. Many participants noted that the Copenhagen conference never even got as far as a formal draft laying out the options.

All sides agree that the promises made so far for curbs on greenhouse gas emissions still fall far short of what is needed to limit global warming to a U.N. goal of 2 degrees Celsius (3.6F) above pre-industrial times.

But some developing nations said the new text showed a widening acceptance by rich nations to help them to cope with loss and damage from major impacts of climate change, such as droughts, floods, hurricanes or sea level rise.