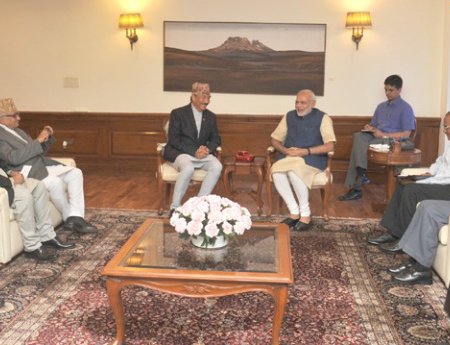 “The agreement signed between Madheshis and Prime Minister Girija Prasad Koiala has no relevance in the present context,” Prime Minister K.P. Sharma Oli told Madheshi leaders. “The circumstances have changed now and there is the need of a new agreement.”

Deputy Prime Minister and Foreign Minister Kamal Thapa said, “It has angered me so much that Indian External Affairs Minister Sushma Swaraj did not fulfill her commitments. I am frustrated by the behavior of India. What they promised to me need to be fulfilled.”

Oli's remarks raise questions over the legitimacy of work by former Prime Minister Koirala, who had signed the agreement on behalf of the state. Given these remarks, what will happen if other prime ministers raise similar questions over Oli's position on national issues in the coming days?  Similarly, the Deputy Prime Minister and Foreign Minister Thapa’s statement reveals the confusion as to whether Thapa had negotiated with Indian External Affairs Minister Sushma Swaraj on individual capacity or on behalf of the state?

Since unification by Prithvi Narayan Shah 240 years ago, Nepal has been passing through all kinds of instability. Whether it be the King or Rana or the leaders of democratic dispensation ruling Nepal, the state has not got the opportunity to mature.

To make the state mature, what is required is stability in governance. That is what lacking in Nepal. As the total state system is under unstable situation, it has implications in all government institutions.

These are not just two examples of state of affairs mishandled in Nepal. Just a month ago Minister of Commerce and Supply Ganesh Man Pun secretly visited People’s Republic of China and made a deal with a Chinese oil company. With minister Pun’s request, Chinese Oil Company invited Nepalese delegation to sign the agreement with Chinese company to import oil.

As the state is immature, Nepal's dealing in bilateral and internal matters are regarded as unreliable. Although Koirala had signed the agreement representing the state, unlike what Oli tends to think, and Deputy Prime Minister Thapa made commitments with India as foreign minister, their statements show that they are speaking individually.

Prime Minister Oli's non-commitment to the previous agreement signed by his predecessor, it is hard for anybody to trust the state. If the agreement was against the national interest, why nobody raised voices against it. There is a tendency in the country to make commitments individually.

As Nepal’s previous ministers and leaders all took the commitments expressed to Indian state individually, the present crisis of confidence between Nepal and India is taking its toll.

Indian External Affairs Minister Swaraj questioned the commitments made by Nepalese leaders on constitution and sought clarifications from Thapa.

This is not different with Indian state either. Despite its maturity in statecraft, the Indian state has lost some grounds this time. They treated Deputy Prime Minister and Foreign Minister Kamal Thapa as an individual and Madheshi leaders as the state.

This is not the first time India has made such a decision. During King Gyanendra’s direct rule, Indian leaders summoned late Girija Prasad Koirala, Madhav Nepal and even then underground Maoist leader Prachanda.

Matured state makes commitment maturely and fulfills its obligation and commitments. One can see flaws in Indian state also but it is rare. Sandwiched between two great powers India and China, the Nepali state will create a lot of problem in the coming days if it does not show the needed maturity in its handling of internal and external affairs.

POLITICS No Magic Number By Keshab Poudel 4 days, 11 hours ago

New Government Is Impossible Till Maoist Pull Out From The Government;: NC President Deuba By Agencies 4 days, 11 hours ago

Prime Minister Oli Calls For Support From All Sides To Tackle COVID-19 By Agencies 6 days, 3 hours ago