With the disagreement between three political parties and Madheshis, there is no likelihood of finding a political solution soon 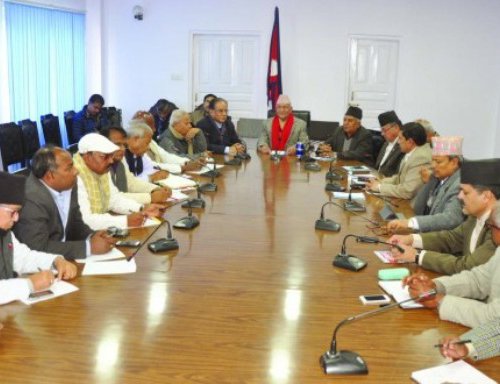 Following the failure to find an agreement among three major parties and Madheshsi Forum, the hope of the common people to see political resolution and end of blockade has been shattered.

Although CPN-UML, Nepali Congress and UCPN-Maoist have proposed common points for an agreement to amend the constitution, adding inclusiveness and constituency delineation on the basis of population, Madheshi parties have rejected the proposal demanding that the boundary of provinces as their bottom-line.

Leaders of Madheshi parties have also demanded an agreement on citizenship as they want to continue the provision of citizenship in the new constitution. However, the three major political parties have rejected these Madheshi demands.

They proposed to form a high level political mechanism to study on the delineation of the boundary. So far as the issue of citizenship is concerned, CPN-UML leader and Prime Minister K.P. Sharma has vehemently opposed the proposal.

“The boundary cannot be changed without technical recommendations and there is no question to change the provision of citizenship,” thundered Prime Minister K.P. Sharma Oli in a program.

As the possibility of agreement between the major parties and Madheshis is very bleak, an early solution to the present political crisis is unlikely. After returning from New Delhi, Madheshi leaders are likely to intensify their agitation to put pressure on the big three.

“We are compelled to visit New Delhi as leaders of big three parties did not listen to our demands for equal rights and justice," said Mahant Thakur, leader of Terai Madhesh Loktantrik Party.  "The big three should accept all our 11-point demand in a package.”

With the debates in India’s upper house, Nepal’s problems are now not only internal affairs. They have taken an international dimension. At a time when Nepalese Diaspora are protesting the recent blockade as Indian blockade, opposition MPs of Indian parliament have blamed the ruling party for imposing the border blockade.

Whatever be the outcome of the debates, the present political crisis is unlikely to end anytime soon. As Madheshis and the present ruling coalition, led by K.P.Sharma Oli, have makes the matter as a prestige issue, it will be very difficult to find a middle way out.

The solution of the present problems can be found on broader understanding and acceptance of each other’s concerns. A compromise formula is likely to be accepting the provisions of inclusion, constituency delineation, citizenship and federalism as per the interim constitution.

If the agitation prolongs and deadlock continues, it is likely that the agitating parties will demand scrapping of the present constitution. RPP-Nepal leader Dilnath Giri has warned in the recent times that there is a possibility of revival of monarchy and Hindu Kingdom if the solution cannot be found soon.

Although it will be a long way to go, Giri’s arguments make some sense given the recent demonstrations in Birgunj, Biratnagar, Janakpur and other bordering cities, demanding the restoration of monarchy and Hindu stat,e along with fulfilling the demands of Madheshis.

In this tangled political situation, Nepal’s impasse is unlikely to go away anytime soon, meaning the suffering of the people will be much harder in the coming days.

POLITICS No Magic Number By Keshab Poudel 4 days, 11 hours ago

New Government Is Impossible Till Maoist Pull Out From The Government;: NC President Deuba By Agencies 4 days, 11 hours ago

Prime Minister Oli Calls For Support From All Sides To Tackle COVID-19 By Agencies 6 days, 2 hours ago