Although ADB supported projects are making progress, Nepal is yet to improve its portfolios 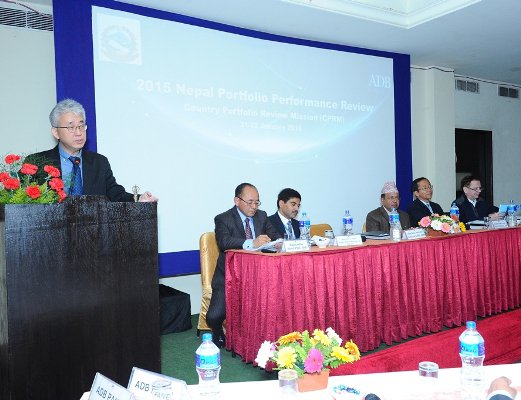 At a time when Nepal has been passing through a major energy crisis, with almost 13 hours of daily load-shedding, the country's performance in spending the Asian Development Bank’s assistance in the energy sector is miserable.

In the recently-held Portfolio Performance Review of 2015, it is disclosed that the country was able to utilize only $30.6 million of the Asian Development Bank (ADB)’s funding. However, the bank had pledged for energy sector projects worth $444.2 million till the end of 2015.

“Our performance in energy sector is poor. After this review, we will definitely work to improve our performance,” said Suman Kumar Sharma, secretary of Ministry of Energy.

As Nepal is facing the energy crisis, it requires a huge investment to overcome the situation. Thus, energy sector projects alone cover 26 per cent of the net available ADB’s funding amount of $1.7 billion.

As the progress of the projects is slow, ADB had shown dissatisfaction over the performance of the projects during the ADB’s country portfolio review mission held here recently.

ADB has made a commitment of $135.43 million as loan for Tanahu Hydropower Project and $68.63 million for Electricity Transmission Expansion and Supply Improvement Project.

ADB and Nepal Electricity Authority (NEA) had signed a project agreement for the implementation of the Electricity Transmission Expansion and Supply Improvement Project in April 2012.

ADB has said that except for Electricity Transmission Expansion and Supply Improvement Project and Tanahu Hydropower Project, the rest of the projects are on track. NEA and Tanahu Hydropower Ltd are the executing agencies for these two projects, which have failed to deliver the desired output in 2015.

ADB has identified delay in land acquisition, right of way (RoW) and forest clearance, limited manpower in project implementation agency, and insufficient project management capacity as the major obstacles in the timely implementation of the energy projects.

This year, ADB expects that the country will be able to utilize over $139 million in implementation of energy sector projects against $30.6 million in 2015. ADB has also been providing support for Energy Access and Efficiency Improvement Project, Detailed Engineering Study for Upper Seti and SASEC Power System Expansion Project.

“Following the recent reforms of ADB’s financial resource, ADB is ready to increase the annual lending level to Nepal by 60%, starting 2017, from the present level of about $275 million per annum in the last five years. However, this will critically depend on accelerating the implementation of the existing projects,” said Director General Hun Kim.

Nepal’s overall performance of its portfolio has been trailing behind ADB average. Of the net available funding amount of $1.733 million spread over 33 investment projects, 55% is still to be contracted and 72% is still to be disbursed.

“The greatest challenge is that annual disbursement has persistently trailed behind annual new commitments by almost 50% in the recent years. To date, unutilized amount has reached $1,255 million, almost equivalent to 6% of GDP. This is sizable when the country’s annual capital expenditure is at less than 4% of GDP. This is not sustainable, and does not auger well to seek increased ADB funding for development projects,” said Kim.

Kim also praised Energy Ministry for its recent delegation of the procurement authority of NEA projects from its board to management, which will substantially reduce procurement time there.

Kenichi Yokoyama, ADB’s Country Director for Nepal, called these progresses as notable and can start turning around Nepal’s overall project performance in a significant way. “We need to consolidate the progresses made and continue tackling these systemic constraints as well as project-specific problems. With these efforts, we are hopeful that annual disbursement can be substantially increased to reach at par with annual lending in the next few years, although the performance in 2016 will still depend on fuel and material supply conditions,” said Yokoyama.

As Melamchi water supply, Tanahu hydropower, and Tribhuvan and Gautam Buddha airports, and other large scale highway and transmission line projects are running behind the schedule, ADB has requested to set out clear recovery plans and revised completion dates.

Similarly, Raising Income of Small and Medium Farmers Project won the Best Performance in the important thematic area of Gender and Social Inclusion.

ADB began lending to Nepal in 1969. ADB’s cumulative assistance to Nepal by the end of 2015 stood at $4.6 billion. It comprised of 134 loans ($3,721.4), one sovereign loan from Ordinary Capital Resource ($2 million), 35 grants ($826.7 million) along with five non-sovereign loans totaling $49.6 million. There has been a marked shift in the distribution of portfolio from rural and social sectors to infrastructure. As of the end of 2015, infrastructure sector comprised 76 per cent of the active portfolio.

NEPAL’S ECONOMY Growth At 2.7% By A Correspondent 10 hours, 9 minutes ago

FNCCI Populist Agenda By A Correspondent 10 hours, 30 minutes ago