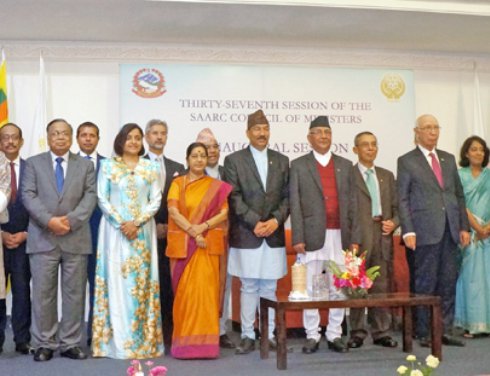 Known for its lackluster performance, foreign ministers from eight South Asian countries gathered in Pokhara to discuss the issues on regional economic integration and development.

In a hopeless state of almost three decades, South Asian Association of Regional Cooperation is no more than a club of countries having overshadowed by bilateral differences.

However, the situation is now very favorable and India and Pakistan’s relations is gradually warming as the meeting of two foreign ministers sideline of the SAARC ministerial meeting.

Foreign ministers from six SAARC member countries have confirmed they will attend the meeting.

Officials at the Ministry of Foreign Affairs said deputy foreign minister from Afghanistan and Pakistani Prime Minister’s Foreign Affairs Adviser will be participate at the meeting.

The meeting will dwell on road and air network, energy development, cooperation on control of terrorism, poverty alleviation, common trade and youth unemployment, among others.

Aaphailai Khojda: Confessions Of A Professor By Keshab Poudel 3 hours, 59 minutes ago

BHARAT RAJ PAUDYAL: Diplomat With Passion By A Correspondent 1 week, 3 days ago

Hindu Kush Himalayan Region’s Ministers Come Together For The Cooperaiton On Climate Action By NEW SPOTLIGHT ONLINE 1 week, 4 days ago