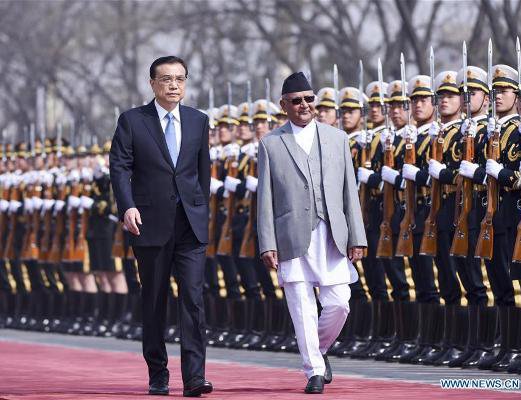 During the talks, the two Prime Ministers made a comprehensive review of bilateral relations and expressed satisfaction over steadily growing relations between the two countries. The two sides exchanged substantive views on further strengthening and consolidating mutual trust and understanding as well as promoting mutually beneficial cooperation in various fields.

According to a press release issued by Nepalese Ministry of Foreign Affairs, trade diversification, cross border connectivity and infrastructure development, cooperation on energy, tourism, finance, education and culture were among the matters that figured prominently during the talks.

Following the official talks, the two Prime Ministers witnessed the signing ceremony for 10 bilateral Agreements and Memorandum of Understandings concluded between Nepal and China. The agreements include agreement on Transit Transport between the Government of the People’s Republic of China and the Government of Nepal. the Construction, Management and Maintenance of the Xiarwa Boundary River Bridge, (Hilsa) Humla. These two agreement was singed by deputy prime minister and foreign minister Kamal Thapa.

According to a press release issued by Ministry of Foreign Affairs, the Chinese Premier also hosted a luncheon in honor of the Prime Minister of Nepal and his delegation at the Great Hall of the People.

Earlier today, Prime Minister of Nepal was accorded a warm welcome with state honour at a special ceremony held at the forecourt of the Great Hall of the People. The two Prime Ministers jointly inspected the Guard of Honor.

According to Chinese news agency Xinhua, Chinese Premier Li Keqiang held talks with his Nepali counterpart K. P. Sharma Oli on Monday and they agreed to expand reciprocal cooperation between the two countries in pursuit of common development.

Hailing the traditional friendship and cooperation, Li said China firmly supports Nepal's efforts to safeguard sovereignty, independence and territorial integrity as well as the Nepali people's choice of development path, and will not interfere in Nepal's internal affairs.

The premier pledged that China will boost practical cooperation in "key" areas with Nepal, including connectivity, industrial capacity, oil and gas, trade, tourism and law enforcement.

Li hoped the two sides will start feasibility studies on a bilateral free-trade agreement (FTA) so as to launch FTA negotiations at an early date.

The Chinese government will encourage Chinese banks to set up branches in Nepal, Li added.

Oli, on his first official visit to China as Nepali Prime Minister, said the traditional Nepal-China friendship will not be affected by any external factor, which has set an example for relationship between countries of different sizes and different political systems.

Nepal adheres to the one-China policy and will not allow any activity on the Nepali territory that will impair China's interests, said the prime minister.

Hailing China's support for Nepal's independence and development as well as the neighborhood diplomacy featuring amity, sincerity, mutual benefit and inclusiveness, Oli said his country looks forward to benefiting from China's peaceful development and will actively participate in China's "Belt and Road" initiative.

Nepal hopes to expand cooperation with China on infrastructure, energy, agriculture, finance, trans-border trade, tourism and education to advance the bilateral relationship in a sustained way, said the prime minister.

After their talks, Li and Oli witnessed the signing of a string of cooperation documents, involving areas such as transport, trade, energy and finance.

Prior to the talks, Li held a red-carpet ceremony to welcome the visiting prime minister. Later this week, Oli will attend the annual conference of Boao Forum for Asia in China's southern province of Hainan.

During Oli's visit, China and Nepal will issue a joint statement later.

Holocaust Education And Remembrance In Nepal By NEW SPOTLIGHT ONLINE 4 hours, 20 minutes ago