British Prince Harry stayed in home and stay. He was served Dinner, a traditional meal of dhal bhat and vegetables by hosts Mangali Gurung. 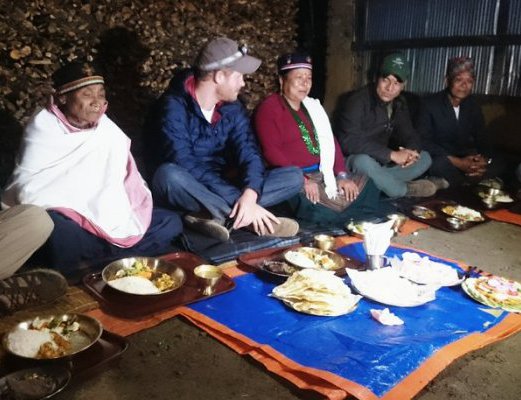 British Prince Harry stayed last night in home and stay.  He was served Dinner, a traditional meal of dhal bhat and vegetables by hosts Mangali Gurung.

It took for him 45 minutes while rafting to complete a distance of 4 km from Gaida Machan to Baghauraphata at the BNP.

During the rafting, Prince Harry enjoyed the sight of deer crossing river, according to CCO Thapa.

Prior to rafting, CCO Thapa, Chief District Officer (CDO) Bishnu Bahadur Thapa and lawmaker Sanjay Gautam of Bardiya welcomed Prince Harry, who landed at the helipad of Gaida Machan of the BNP at 9:19 am. British Ambassador to Nepal Richard Morris and other officials of Kathmandu-based British Embassy accompanied him to the BNP.

Harry had seen marks of tiger's paws at two different locations before and after rafting, CCO Thapa informed. While trekking for 20 minutes to reach Baghaura Phanta, he had queried about tiger conservation. During the conversation, he had also asked for the actual data of rare wildlife species (tiger, rhino and elephant).

Harry also inspected a camera trap that is used to monitor tigers. Bardiya is now home to 50 tigers, which is a great rise from 18 in 2009. Shailendra Yadav of National Nature Conservation Trust, Kanchan Thapa of World Wildlife Fund and Heguwa Tharu of the BNP had briefed the prince about the camera trap.

But that did not satisfy him. Harry got himself monitored through a camera trap while he walked like a tiger. "He wanted to learn how to trap a tiger. He also asked where tigers can be found in the BNP with an area of 968 square kilometers.

Likewise, Tharu folk dancers in Dalla village gave him a special welcome as he reached there. The village uses tourism to help fund the local community by offering traditional overnight home-stays to visitors. The Dalla community folks handed over a couple of traditional gifts to Prince Harry as he bade goodbye to them.

Nepal Extends Lockdown Until June 14 And Suspended All Flights Till June 30 By NEW SPOTLIGHT ONLINE 23 hours, 52 minutes ago