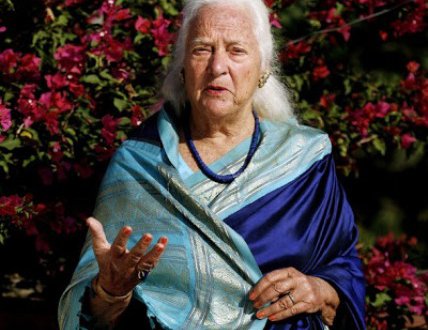 One does not necessarily need to be a naturalized citizen or a native of a country to love it and show affection. The love to the soil does not come from where one was born.  Born in America, late Barbara Adams, a Nepali citizen, spent her entire life dedicating it to defend Nepal and its beauty.

Barbara Adams grew up in America, but she lived in Nepal for more than five decades, witnessing the social, political and cultural transformations of the country.

Barbara is not the lone American who contributed bricks to build the nation of Nepal. There are several Americans and other foreigners who contributed to lay the foundation of modern Nepal.

In 1961, it took Barbara Adams more than a week to arrive in Nepal from the United States of America. She was in Kathmandu, on an assignment for an Italian magazine, to cover the state visit of Britain’s Queen Elizabeth II to Nepal.

“I was sitting at the Yak and Yeti bar of the Royal Hotel, and the prince mistook me for someone else.”

And began the remarkable Himalayan journey of Barbara Adams.

Over the next five decades, she would become the best-known American in Nepal. She was sought out by diplomats, and for years, she held court at the boozy expatriate gatherings at her expansive house, which held two grand pianos, in downtown Kathmandu.

Whatever the difficulties she faced, Adams’s love to Nepal continued and she was in a Kathmandu hospital when she died on April 22, two days before her 85th birthday.

Headstrong and outspoken from an early age, Ms. Adams dropped out of high school and spent her days riding horses. She managed to get admitted to George Washington University and later studied languages at Columbia University, but she left the United States in the early 1950s to pursue a Bohemian life in Europe.

She spent several years in Rome, where she wrote for both Italian- and English-language publications. She sometimes hinted that she was married to an Italian doctor, but that cannot be verified.

In 1961, it took Barbara Adams more than a week to arrive in Nepal from the United States of America. Green paddy fields, mountains and a lovely town welcomed her in Kathmandu. Today, five million people mill around the chaotic city.

Adams did leave Nepal for a time, but she managed to return. After the country’s monarchy was abolished in 2008, she became one of the few outsiders granted the Nepali citizenship.

In 2011, she launched the Barbara Peace Foundation, which has built dozens of houses for Nepal’s poorest people. “This is my home and I want to die here,” she said  in his interview to New Spotlight.

Over the tumultuous decades, she saw constitutional monarchy under a multi-party democracy, promulgation of the new interim constitution, historic elections to the Constituent Assembly and then the abolition of monarchy. Barbara has published her memoire in which she describes the turmoil and changes taking place in Nepal.

Call her a living history of Nepal’s change, if you will, Barabara, however, is a bit frustrated about political leaders and the old generation. But she has not given up hope for a better Nepal.

After more than four decades, Barbara was granted Nepali citizenship in 2008. In her nearly 50 years of experience in Nepal, Barbara has seen her beloved country transform from relative obscurity into a state that could best be described as relative ‘chaos.’ She has seen political upheavals, regime changes, and socio-cultural transformations.

“People were innocent back then. Instead of being suspicious, people readily chatted on the streets. They were very honest and very straight. I remember leaving my wallet with all my money and two days later somebody brought it back to my house. I blame too much foreign presence and too much money being thrown too fast in Nepal for corruption and greed. Greed and corruption have become our culture,” told late Barbara’s in her interview to New Spotlight in 2010.

“Youth of Nepal is creative. The films that are being produced (by youth) are impressive for a country that was once so closed. There are films on animal sacrifice and third gender. It's only the young people who give me hope for a newer, better Nepal. They need to sink their teeth in and do what is needed to be done.”

PRASHASTI ARYAL Rising Poet By A Correspondent 1 week, 2 days ago

COVID-19: Protecting Workers In The Workplace By Patrick Belser 1 month, 3 weeks ago