“Barpak Is One Model Of Reconstruction” Rabindra Adhikary

At a time when reconstruction work in the earthquake devastated areas is going slow, Chairman of Development Committee of Legislature Parliament RABINDRA ADHIKARY recently visited Barpak, epicenter of Gurkha Earthquake,and took part in a convention. 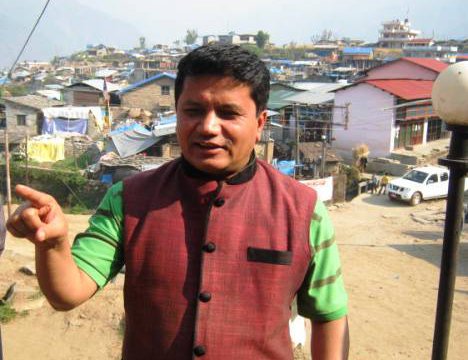 As you visited Barpak to commemorate the first anniversary of Gurkha Earthquake, how do you observe the state of reconstruction in the epicenter?

Barpak was the epicenter of Gurkha Earthquake and this is a very important place in terms of tourism. This is where the settlement of Indian and British Army soldiers is. This is also a birthplace of Victoria Cross winner Gaje Ghale. This is very important in many respects. Barpak is in the media. As we are commemorating the first year of earthquake, it struck my mind about the damage and loss I had encountered a year ago when I visited the place. Just after a big earthquake, residents of Barpak received all kinds of support from different agencies including the government, civil society organizations like NGOs and INGOs and development partners.

After one year or in my third visit, what I found was that Barpak is reviving. I can say that the way the momentum of rescue and relief moves, the reconstruction process is comparatively slow. It is sad to say that reconstruction is very slow.

As I know the data has already been finalized and adequate budget and manpower have already been supplied to National Reconstruction Authority, people will likely receive the first installment of Rs.200, 000.00.

One of the positive sides of Barpak is that people have started to construct their houses by themselves. Of course, there is a scarcity of manpower and materials, but people have started reconstruction of building and they did not wait for the government. Given the current trend of reconstruction continues, manpower and materials will continue to be in a shortfall. As National Reconstruction Authority has already started the distribution of first installment of subsidy money, it will intensify the process of reconstruction. If we don’t deal with the scarcity of materials and manpower, a situation will arrive when the people will have cash but no materials. We have to work to manage the things.

At a time when the pace of reconstruction is going slow, what role can you play as a chairman of Development Committee of Legislature Parliament?

The process of distribution of money is lengthier and planning process has many complexities. Despite all these handicaps, something is moving in Barpak as people have already constructed temporary school building and water distribution system is now under construction. Similarly, the maintenance of damaged micro-hydro has already worked, with supply of electricity ready to resume. All these are positive things. The construction of Earthquake Memorial Park has already started. Of course, the process of reconstruction is slow. Yet I can say that the progress is faster now. There is the need to relocate a settlement of Laprak another Gurung settlement due to landslides. I am very happy to know that the land for the resettlement has already been identified and the problems with Forest Department have already been settled.Park Urban Settlement plan has been prepared.Barpak will be a scientifically better and resilient city in the future.  Black topping of Barpak and Gorkha road is currently under way. After completion of the road, Barpak will be a model modern settlement for the tourists. Although everything is going on, we cannot see the reconstruction per se but still the temporary settlement.

After completion of Earthquake Memorial Park and other infrastructures, one can see the new construction in Barpak. In the first phase, we were able to make better delivery of the relief materials and other materials for temporary shelters.

How do you see the importance of Barpak Conference on "Rebuilding Nepal: Protecting and Promoting the Rights of the Affected Communities recently held in Barpak?

Paper work alone cannot bring a drastic change. However, such conferences can play a very significant role to accelerate the reconstruction process. At a time when all different stakeholders have been supporting the rebuilding process separately, this conference has brought all different stakeholders in the same place for a broader cause. I would like to thank the organizers of the conference,the Humanitarian Accountability Monitoring Initiative (HAMI), Himalayan Conservation Group (HCG), Community Self Reliant Centre (CSRC), Nepal Community Development Monitoring Centre (NCDMC) and OXFAM Nepal. I have already told the organizers that they need to contribute for the reconstruction of Barpak and Larpak along with the declaration. INGOs and NGOs need to support in the health, education and sanitation sectors. They should support the reconstruction of civilization development.

I don’t think by making the houses worth of Rs.200,000.000 can solve all problems. There is the need to do a lot of work along with the reconstruction. Here INGOs and NGOs have a role to play. Civil society organizations also help in conducting trainings for masons in building back better.

Despite suffering a lesser damage than other earthquake affected places such as Rasuwa, Sindhupalchwok, Dhading and Dolakha, why is Barpak getting higher priority?

I don’t think so. All earthquake affected districts have been receiving similar priority. Government does not have any discriminatory policy. As Barpak was at the epicenter of the earthquake, it is naturally a place for global attention. Barpak is also the home of British and Indian Gurkhas and it is the gateway to Mt. Manaslu, going through settlements featuring unique Gurung culture. Britain, India even NRNs have shown interest to work here as this is the place of international concern. So far as my knowledge is concerned; the government and civil society organizations have been giving priority to all the earthquake affected districts.

I have received complaints during my visit to other earthquake affected districts. What I have told them is that they need to sell the importance oftheir place. For instance, Helambuand Melamchi are famous tourist spots of  Sindhupalchowk. Langtang is another very famous place in Rasuwa and Upper Tamakosi Hydro power project is a milestone of Dolakha. All of them need to sell this importance of the place to attract the global community.  Each area needs to highlight their own aspects. So far as the facilities provided by the government are concerned, there is no discrimination at all.  National Reconstruction Authority treats all equally well.

How do you see the coordination between the government agencies?

I summoned the meeting of all different government offices involved in the earthquake reconstruction. Of course, there are certain lapses among them. For instance, Ministry of Forest and Ministry of Urban Development do not have the necessary coordination. Similarly, there is a lack coordination between NGOs/INGOs and other line agencies in the districts. The situation was chaotic in the earlier days. Even Commission of Investigation of Abuse of Authority was involved in the post-earthquake work. After holding meetings of all these state institutions, the situation has now changed for better.

When there is the need to work on a fast track, oversight agencies also need to support the concerned departments. There is a feeling among the bureaucrats that those who work in fast track are likely to get trapped in the scandal.

How do you see the role of National Reconstruction Authority (NRA)?

Earlier, NRA did not receive much needed support from the government line agencies.  NRA is a powerful body set up to carry out reconstruction work effectively. With certain hiccups in the initial phase, NRA has now started the work; it has already distributed the first installment of cash to the victims for the reconstruction. With the mobilization of over 1000 civil engineers, NRA is now in a position to drive the reconstruction. Our committee is monitoring the activities of NRA very closely.  As a body with enormous power and authority, NRA does not have to look to other organizations. People should get relief and benefits of the development. As NRA has already decided to decentralize some of its authority to district line agencies, the situation will ease. If there is a lack the coordination, even prime minister’s office need to play a coordinative role.

"Himalayan Bank At This Time Is Not So Keen To Go For The Merger" CEO Rana By A Correspondent 1 month, 1 week ago