JICA SUPPORT SINCE EARTHQUAKE Farm Is Back 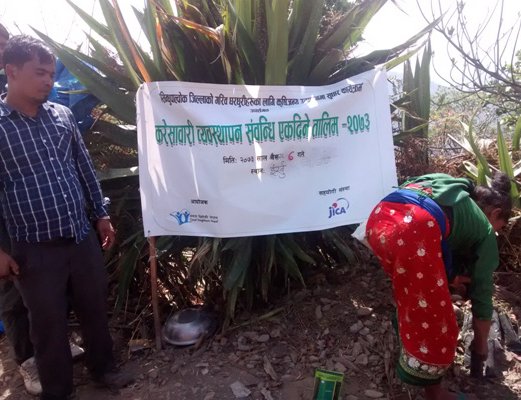 Not all earthquake victims may be as fortunate as Nirmaya Tamang, a resident of Ward No. 5 of Irkhu Village Development Committee, 80 kilometers east of capital city. Her life returned to a state of normalcy in a year.

Although Tamang is yet to build her house that had collapsed following the earthquake of April 25, she now has reasons to rejoice. She produces enough vegetables and other food stuffs to feed her family and sells the surplus to the market.

Like Tamang, most of the households of Irkhu Village of Sindhupalchwok are in a stage of revival, hoping for a good harvest in the coming year.

From obtaining training to produce vegetables in the kitchen garden to using high-breed maize and paddy seeds, many villagers in Sindhupalchwok and Gorkha have come out of difficulties to start moving ahead.

With Japan's experiences of earthquakes and destructions, JICA knows where the interventions are required for the people to return to normalcy. Alongside building temporary shelters and other infrastructure, Japan launched livelihood programs supporting agriculture sector in Gorkha and Sindhupalchwok districts in July 2015.

When JICA came with its livelihood package, many farmers were helpless as their seeds and foods were buried under rubble. For subsistence farmers, food production depended on the quality of seeds stored by farmers.

“I did not weep when my house collapsed and lost property. I wept when I saw all my paddy seeds stored inside the house buried. There was no way to recover the seeds,” said Tamang. “Seeds were more valuable for me than gold.”

Even the seeds stored in the District Agriculture Development Office and seed centers were buried when the buildings collapsed.

“It is good to observe progress in livelihood under Japan’s support and life is gradually returning to normalcy. We want to see our support to contribute to uplift the livelihood of poor people,” said Uichiro Nakano, first secretary of Embassy of Japan. “Despite own difficulties due to earthquakes, Japanese people have been supporting Nepalese people and they want to see their support going to the needy people.”

As the scarcity of seeds left farmers without plowing their field, the District Agriculture Development Office sought support to avert a possible food crisis in the district. Japan International Cooperation Agency (JICA) responded with the package of livelihood programs, along with seeds and other components, including income generating activities.

Sushila Tamang, 38, mother of three children, has already started to produce enough vegetables to sell at the Irkhu market, half an hour walk from her house. “Training and seeds provided jointly by JICA and DADO under the supervision of JICA’s experts helped us in producing the vegetables in our garden,” said Tamang. "We have already planted the new maize seeds provided by DADO and JICA.”

Although people are still living in temporary shelters, they are happy with the production generated through the technical and other support of JICA and DADO. “Of course, the permanent shelter is the prerequisite for all but what is important for them to produce enough food to feed their family,” said Sharma. “Villagers are happy because they have food and vegetable.”

Supporting the earthquake affected population without delay through recovering public service and income- generation of the people, JICA has launched several important programs.

“I am encouraged by the enthusiasm shown by the earthquake victims in growing vegetables during the training. Women are using all their skills and seeds provided by us to increase the productivity. If people have enough food, they will settle the other things,” said Nakamura, JICA’s consultant for the livelihood project, in Sindhupalchwok.

JICA has been supporting reconstruction of Local Public Facility, livelihood support for earthquake affected people in Gorkha and Sindhupalchwok. It has already fixed 23 projects, with six projects ongoing.

JICA’s support does not last here. They are also supporting to restore and strengthen the livelihood related district level institutions in Sindhupalchwok district.

The aim of a project is to increase the production of vegetables in home gardens through the improvement of vegetable production skills of women and to ensure food security with home grown food at times of disasters. The project will last till April 2017, covering Irkhu, Talmarang, Bansbari, Mangkha, Thokarpa of Sindhupalchwok and Koplang, Barpak, Mirkot, Simjung, Muchhok and Kharibot of Gorkha, directly benefiting 585 women group’s member.

As Nepalese women are using traditional knowledge and skills, the project is hoping to see improvement of knowledge and capacity of the targeted women farmers on vegetable production.

Another work is development of a simple practical manual on vegetables production and joint purchasing that can be used by women’s group in other VDCs and wards.

Along with the vegetables, improvement of maize farming practices for poor farmers makes yet another project.

It is targeting 450 poor farm households. However, the project has indirect benefits to all the districts. The project helps to improve maize cultivation skills and use appropriate agricultural input materials and development of a simple cultivation manual.

Nepalese farmers have been practicing centuries old practices of seed production which is affecting productivity. By launching improvement of production quality of seeds, particularly in three staple foods, Maize, Potato and Paddy, JICA wants to increase the production of improved seeds with good quality and to contribute to the food security of the community in Ichok, Kyual, Irkhu and Phulpingdanda and Jetal villages.

Although the program targets seed production for farmers of the target VDCs and agriculture cooperatives, it will have indirectly helped all the farmers of Sindhupalchwok district.

As Nepal and Japan are celebrating sixty years of establishment of diplomatic relations this year, the returning normalcy in the livelihood of people through JICA’s support is significant.

UNICEF REPORT: Children Suffering By A Correspondent 1 day, 14 hours ago