“Upper Tamakoshi Will Be Back At Work Soon” Bigyan Prasad Shrestha 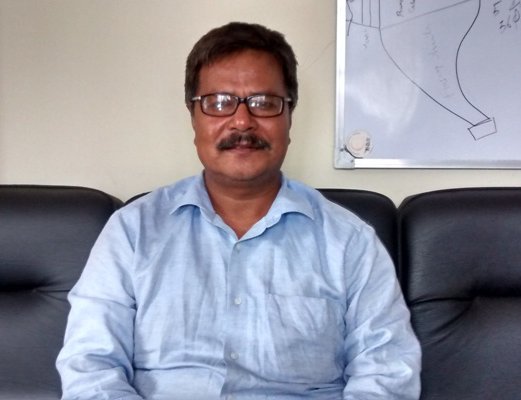 A year has already passed since the great earthquake disrupted the project. What is the state of the project now?

Just when we resumed the work after the rainy season, the border disruption badly affected our work. The supply of petroleum products and other materials affected the work and we were unable to make any major progress. The earthquakes were beyond our control, but the border disruption too brought us similar consequences. Despite all difficult situations, we remobilized the contractor after December 2015. However, the speed of remobilization is less than desired.

How about the state of the roads?

What about the track road?

We are now reopening the track road and working for improvement of last 26 kilometers portion. The last portion of 4 kilometers of road will open when the tunnel will be ready at Kavre hill.

Have you done any estimation of the damage of the project?

Our initial estimation is that the earthquake destroyed about 2.5 billion rupees equivalent in infrastructures, assets and other equipments of contractors. We are now claiming this amount with the insurance company.

Do you mean the project has to bear 2.5 billion rupees in loss?

This loss will be covered by the insurance. There are many other indirect losses and the escalation cost will be higher. It includes the rescheduling of the project time, maintenance of roads, escalation cost, price increase, administrative cost, consultations cost, interest rate. Insurance will cover the cost of direct loss.

It is reported that the earthquakes had also damaged the dam site and the company brought experts to assess the situation, what does their initial report say?

The earthquake damaged only the surface structures including roads and buildings, contractor equipments and equipments stored at surface. There is a problem in surface structure of the dam. The dam has seen a settlement of 17 centimeters. We had invited American Panel of experts to assess the thickness of damage.

What are the recommendations of experts?

Experts have recommended that the damage is manageable. Such damage is natural when earthquakes occur near the dam site. It is natural in such a topography as we have built infrastructures just above the river surface. They suggested us to do water tightness. We will start work soon after the resumption of the road. As Nepal lies in an active seismic zone, all the hydropower projects are under some threat. Our efforts should be to avoid the fault line.

How did the earthquake affect the schedule of completion of the project?

We are rescheduling the plan. Tentatively, the earthquake is likely to delay the project for another year or a year and half. We were expecting to complete the works by 2017. Now it is likely to be completed at the end of fiscal year 2017/2018.

As the civil contractor has already been mobilized and we have also started the construction of powerhouse and road, the project will be completed as per our new schedule. Contractors are building the camp facilities. The work to dig the vertical shaft has already started. We will resume tunnel work from one side within a few days as we have yet to start 1500 meter tunnels at headrace.

What lessons have you learnt from the project?

What we have learnt is that the underground structures are safe as the earthquakes were unlikely to damage them. For instance, our tunnel and underground powerhouse is safe. To repeat, only the surface infrastructures were damaged.

What is the state of the transmission lines and construction of substation in Khimti to evacuate the power?

There is a certain disruption in land acquisition that is delaying the process of construction of substation Khimti. According to provisions, once Nepal Electricity Authority provides us land, the company will start the construction. So far as the transmission lines are concerned, they are in the process of being installed. NEA has assured us that they will complete the land acquisition soon. I don’t think it will create any problem for power evacuation as there is another alternative as well.

It is reported that dry landslides are still falling. Don’t you think this will put any psychological pressure to workers and your staff?

It is true that there are dry landslides in some areas and the staffs and workers are under psychological pressure. The seismic activities are also almost regular and it is also creating a havoc. The whole pace of the project will be determined by the safety in the coming monsoon season. The earthquake has rocked the mountains in Ghorle hill near Singati and dry landslide is falling there. We are working in alternative gears. Personal safety is very important and it is impossible to mobilize the workers without giving them the personal safety guarantee. Human safety is the first priority.

Is your project safe from the earthquake now?

Our project is safe from earthquake. As most parts of our project survived in the earthquake, it is likely to survive any other earthquake in the future.

What is the state of the powerhouse?

As the flood water washed out many equipments of the powerhouse, it will take a few more months to resume the work on it. Some equipments are on the way. The flash flood washed out the equipments worth of one billion rupees.  The warehouse itself got destroyed. We stored some equipments even in Birgunj and Parwanipur.  As the civil work has already started, the electric mechanical work will begin a bit later. The turbine is built by Austrian company which will be built in India.