Nepal is now unfortunately caught within a geo-political rivalry that has brought an unhealthy “Contain China” policy to its doorsteps. Along with it comes arather ludicrous fact: the Mughlanis are under a mistaken view that they can become a regiona 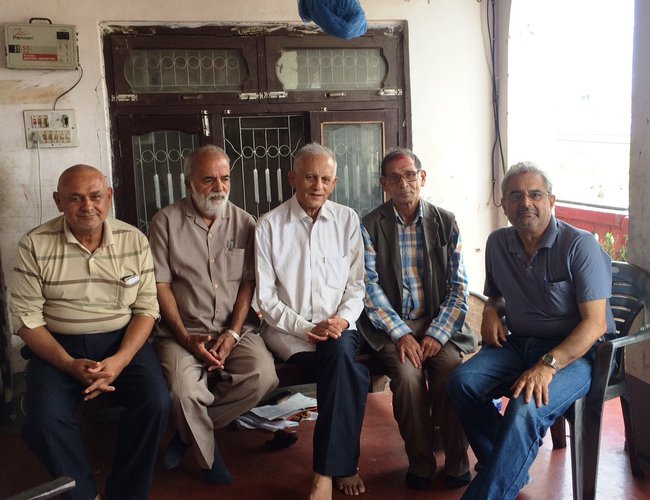 When a group of senior Left leaders met prime minister KP Oli and asked him to rescue the Upper Karnali multipurpose project from its current neo-colonial fate by redefiningit to benefit Nepal, he replied in his trademark style with a Nepali folk haiku: “Kaanchosuntala, nakhaye ta yochala, khayejhankehola?” [Translation: “Green, unripened orange, uneaten how I suffer, what agony would befall if I ate it?”] One could easily surmise what his pithy response meant: given how badly the Mughlanis are treating him and his government for no fault other than promulgating a much delayed (though deeply flawed for reasons other than Mughlani concerns) constitution, how much worse would they react if he did the right thing now to rescue Upper Karnali? King Mahendra said something similar to Rishikesh Shah about the Mughlani occupation of Kalapani in the early 1960s; and King Gyanendra too had to make similar remarks in 2005 to Dr Tulsi Giri regarding appointing a strongly nationalist water minister, though much less poetically than Oli.

Those in positions of responsibility have to temper their feelings and actions against the costs and benefits of a wider context: those out of it have no such compulsions. Hence, it was a strange set of fellow travelers last week on the Upper Karnali protest road to Dailekh. It included a wide spectrum stretching from Left parties (Mohan Bikram Singh’s Masal, Mohan Vaidya’s Dash Maoists, Chitra Bahadur KC’s Rashtriya Janamorcha as well as Biplav Maoist’s Dharmendra Bastola) to academics Surendra KC and yours truly, former water resources secretary Dr Dwarika Nath Dhungel, expert on legal-financial aspects of hydropower Ratna Sansar Shrestha as well as activists Ratan Bhandari, Bharat Shahi of Save Upper Karnali Campaign, and Lok Bahadur Rawat of Karnali Watershed Protection Society.

Although they themselves could not participate this time around, the protest program had the support of all those who signed the open letter to the two prime ministers Narendra Modi and Sushil Koirala on 22 November 2014 that sought the two leaders’ corrective intervention on this project: RPP’s Dr Prakash Lohani, NC’s Ajit Thapa, Cash Maoist’s Lila Mani Pokhrel and many others. What united such a varied bunch was Nepalatwa, a “Nepal First!” principle, incorrectly translated as “nationalism” in the Ernest Gellnerian sense where the state and the nation have to coincide and which is impossible in a multinational state. What was also surprising was that local leaders of the big parties – the UML, Kangress and the Cash Maoists – were mostly in sympathy with the organizers of the protest program even though their leaders in Kathmandu were rather diffident in venting their feelings.

The main lessonsof the September 2015 Mughlani blockade for Nepal’s political class has been that the colonial bulldozer that was East India Company Bahadur is alive and well in Mughlan down south. The current geo-politics is such that this pinched “yam betwixt two boulders” is seeing Nepal’s distant friends across the Black Waters add pressure from the Mughlaniend in promoting this neo-colonialism. Nepal is now unfortunately caught within a geo-political rivalry that has brought an unhealthy “Contain China” policy to its doorsteps. Along with it comes arather ludicrous fact: the Mughlanis are under a mistaken view that they can become a regional super-power not by standing on their own two feet as China and Russia do but by piggy-backing on distant giants.

This death of genuine Non-Aligned Movement, with one of its main architects, India, giving up on it even for pretense, is forcing a political churning within Nepal, of which the Upper Karnali saga is just a small froth in the whirlpool. It has compelled the Kangress to revisit KP Bhattarai’s sagacious assessment that “secularism, federalism and republicanism are foreign imports” ill-suited to fostering Nepalatwa. It is also forcing a unity not just among the extreme Left mentioned above but also between Cashists sans renegade Baburam and traditionally conservative Nepali Tories at the RPP end of the spectrum.

Among the different strands of the Maoists, another more immediate reason for a unity bid is the fear that they will be straddled with war crimes charges. They might like to recall the “Shihanouk model” that finally brought peace to Cambodia’s even more horrific civil war. As my good friend, Cambodia’s top water expert Sokhem Pech described to me – and his brother and father were killed by the Khmer Rouge – it was mainly a restored Sihanouk’s royal pardon that brought about that closure. The EuroAmerican-led war crimes trials there a few years back were seen by many Cambodians as unnecessary after a royal pardon and an affront to their Buddhist sentiments where you do not try octogenarians who will anyway be tried by a Much Higher Power. It is clear Nepal too might have to do something similarly Asian to bring our recent tragic history to a closure (and allay the fears of the Maoists as well as our security forces), but I digress…

What is then wrong with that small fleck within the bigger churning whirlpool, the Upper Karnali project? While water power experts and those in the know had learned from their grapevines and bush telegraphof the flaws in the PDA, it took the indefatigable Ratan Bhandari’s long legal challenges in the parliamentary committees, the Supreme Court and finally the National Information Commission to have it made public. (The political hydrocracyin the form of the wholly unnecessary Investment Board resisted till the last; but after its despicable contents are now known, I would say that if I had signed such a treasonous document, I too might have been very ashamed to see it made public!) From the mass meeting near the Upper Karnali dam site at Ramagad as well as intensive public interactions in Dailekh, Birendranagar and Nepalganj, the following summary points emerged:

A transition government of April 2006 formed on the basis of a resurrected parliament whose five-year, people-given mandate had long expired had no business deciding to hand over the “jewel-in-the-crown” Upper Karnali and Arun-3 sites to MughlaniSahus for export.

That decision violated Article 126 of the 1990 constitution (swearing to protect which the then government of GP Koirala and UML was formed) as well as Article 156 of the interim constitution adopted on 15 January 2007. Those provisions are also there in the 2015 constitution, which continues to be violated, since this export decision bypassed the sovereign parliament.

As proposed, under the current development plan, electricity is exported and unavailable for Nepal’s development: even the 12% Nepal is to get, the PDA states, will be exported by Nepal. This will accelerate the de-industrialization of Nepal and force the country into a raw material exporting neo-colony. (Nepal government has only twice in its recent history made a concerted policy push for industrialization to absorb its youth entering the job market: by Juddha Sumshere in 1938 and King Mahendra in the early 1960s.)

Nepal will give the Mughlani export developer tax- and vat-free facilities as well as subsidies which it does not give to Nepali developers who wish to develop hydropower for Nepal. While Nepal may get a billion rupees a year from royalty and export tax once the project is completed, it will be losing twenty six billion in subsidies and customs waivers during the early construction years.

Original tender provisions have been violated as the developer is no longer going to develop the 300 MW run-of-river Aunladandiya site (and the other bidders are cheated of the chance to bid for this new, untendered version) but is going to capture the Dab Tweenkuna 4180 MW storage site to develop a 900 MW r-o-r project (and hopefully develop the storage site at huge profit subsequent to the site capture, if not it will have damaged a good site with sub-optimal development). Nepal thus loses all the multipurpose benefits of irrigation, inland navigation, industrial water supply, fisheries etc. that would accrue from this “jewel-in-the-crown”.

These and other dreadful facts now place before Nepal serious developmental questions: will we sleep-walk into neo-colonialism or will we wake up before it is too late and use our natural resources to our strategic advantage? Will we correct the illegitimate acts of 2006 and assert our right to first end our load-shedding and electrify the whole country before exporting electricity or will we condemn the future generation of Nepalis to perpetual darwan-hood? And are there any young activists ready to take up the challenge?

The Opening Of The Airport Is A Milestone In Nepal’s Aviation And Tourism Sectors By Arnaud Cauchois 3 days, 7 hours ago

Russian Aggression In Ukraine And Outcome In South Asia By Binoj Basnyat 2 weeks, 1 day ago