Whenever there is a call, PL Sign is ready to hold. There is no full stop in the journey of veteran politician PL Singh’s life 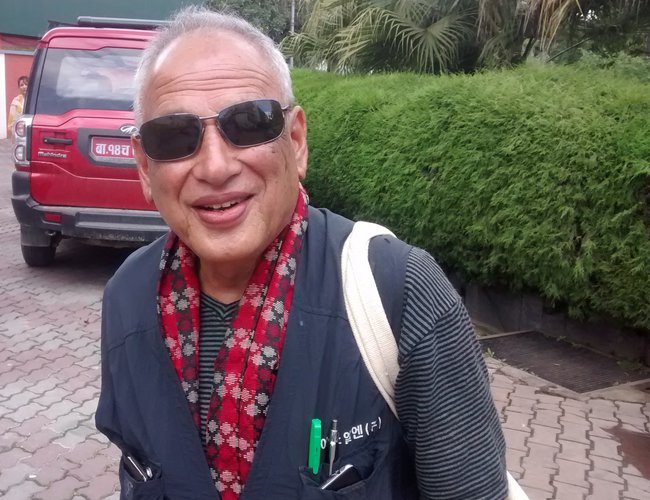 Looking at the rush and hush of veteran politician, mayor and minister PLSingh, no one can draw the blank conclusion about him and his personal way of life. For almost six decades, PL Singh, full name Prem Lal Singh, 77, has been living in this state of rush and hush, helping the needy people as he can.

“Since the age of 16, I have been tendering my personal services to the needy people of Katmandu Valley. I managed my time even during a hectic political period with Ganesh Man Singh and confined period of political prisoner.  My time is dedicated to  the service of  people,” said Singh. I have been doing this kind of service for the last six decades.”

Whether young, middle aged and elder citizen, PL Dai is a common name as he spends more time in roads, hospitals and other public places than his own bed.  This is the reason he did not find time to acquire his own home. He lives for other’s pain and his personal difficulties have nothing to do to him.

For almost three decades during Panchayat rule, Singh spared his time rearing off spring of veteran leader Ganesh Man Singh, who was in exile in India. Mangala Devi Singh, renowned woman leader and spouse of NC leader Ganesh Man Singh, termed PL as her elder son and without his noble support she could not have reared her five offsprings- two sons and three daughters. In her  autobiography, late leader Singh hailed PL as selfless person.

“I feel satisfaction and happiness to work for the people and I like to support people at times of disparate need and trouble. So far as an Iron lady like late Mangla Devi is concerned, she was really a Devi born in this Dev Bhumi (Heaven). It is unfortunate to say that her role in women movement of Nepal has not properly been recognized by the women movement funded by foreign funds,” said Singh. “ I am grateful to work with Ganeshman Singh, Mangaladevi Singh and their families, as a member of family.”

After the demise of the noted Singh couple, PL was inclined to his another spiritual and political guru Krishna Prasad Bhattarai.  When NC leader Girija Prasad Koirala was launching a joint agitation against 1990 constitution, PL sided with conscience speaker and veteran democratic leader Krishna Prasad Bhattarai till the last day of his life.

“Whether they were in the good and bad days, they came to seek my advice and suggestion. Although I am a bachelor, sometimes I had to do the match making for lads and lashes," said Singh, who is now struggling to revive the Constitution  of Kingdom of Nepal 1990, which he sees as a constitution truly made by Nepali people.

“There is no discrimination on the basis of sex, cast and creed,” said Singh. I am ready to offer my service whoever needs it. "No worry, no hurry and no curry,” comments PL Singh.

“I am a people’s man. I am taking a stand not for me. The more you give the more you get. I know some people do not like me but I like them. Because I am their man, I know their criticism is just a suggestion for me and they are my true advisors,” said  PL Singh.

Politics is in his blood from his school days. He was active not only in Nepali politics but he did not spare any opportunity to participate in primary elections campaign for John F. Kennedy in Hawaii when he went there under an exchange program.

In his long political career, he met many internationally important figures. He was a part of delegation led by Ganesh Singh who met US president senior George Bush 1988 in White House.

“Former Indian prime minister PV Narshing Rao was also a very scholarlu person.  When Rao visited Nepal, I hosted a civil reception as a mayor.  He said in a civic reception, 'let me be like PL Singh,' the symbol of friendship between India and Nepal. He said this going out of the text. It was a great complement for me,” added PL Singh.

When I addressed the reception, I said that I don’t want lip service, my slogan is clean, green and healthy Kathmandu. Suddenly at the spot, Indian Prime minister Rao offered a 140-million rupees package to purchase equipment for Kathmandu cleaning drive. This was the personal initiative of Indian PM Rao.

During his tenure as Mayor between 1993-1998, he made several efforts to expand and revive the sister city relations.

As he played an important role to activate sister relations between Japan’s Matsumoto City and Kathmandu Metropolitan, he was conferred an honorary citizen of Japan with recommendation of Matsumoto City Council. Matsumoto of Nagano prefecture and Tukche VDC-Toga village of Toyama Prefecture concluded sister city and sister village relations in 1989.

There have been a lot of changes in Nepal, including in politics, social life and Kathmandu’s surrounding. What has not changed is veteran politician PL.Singh’s dealing with the people.

Although he has celebrated his auspicious 77 years birthday as per the Newari tradition, P. L. Singh, politician and former mayor of Kathmandu Metropolitan, remains what he has been. P.L. Singh’s modesty and simplicity has not changed.

Prem Lal Singh popularly known as PL among the citizens of Kathmandu and the people all over the country is one of the obvious names in the long and tiring struggles for democracy in Nepal.

Liked the story? We’re a non-profit. Make a donation and help pay for our journalism.

International Flights Resume At TIA By Agencies 2 days, 4 hours ago

One Died And Scores Of Building Damage In The Bajura Earthquake By Agencies 5 days, 17 hours ago