Fighting for the Right to be a Nepali Only

Although that stepping back is a welcome development, a more insidious social poison still holds the country in its miasmic chokehold and a serious battle must be waged to free Nepal of that malaise. 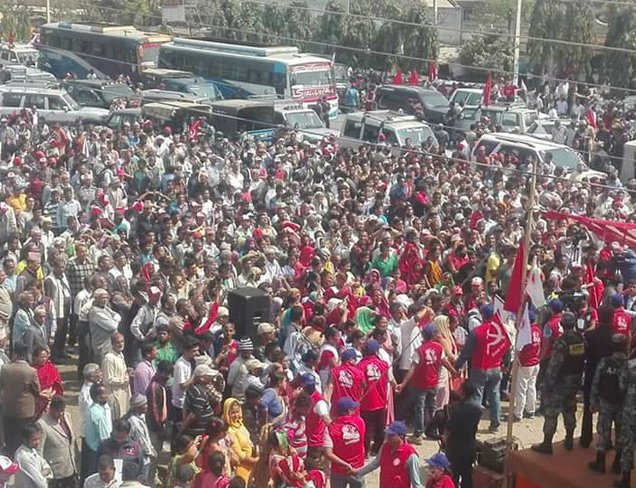 The current Loktantrick dispensation of the big three parties – Cashists among the Maoists, Kangress that long gave up on democratic socialism and the EhMaLey which has become a petty bourgeois, NGO-running party – are making it very difficult for an average Nepali citizen to live and work as a Nepali only. In the current political climate, a Nepali has to be a hyphenated one – a Pahadiya Nepali, a Madheshi Nepali, a Janjati Nepali and so on. Mercifully, the public mood is just the opposite: surveys have shown (http://www.ida.com.np/publications/) that the number of those who identify themselves not as hyphenated but instead as “Nepali only” has been rising steadily from 56% in February 2008 to 72% in 2015. Much of this increase has occurred among Madhesis and Hill Janjatis, the two groups supposedly favouring ethnic federalism. This counter-reality has of late forced a backlash against Mughlani as well as European donors fostering communal politics in Nepal with the advent of Loktantra.

Although that stepping back is a welcome development, a more insidious social poison still holds the country in its miasmic chokehold and a serious battle must be waged to free Nepal of that malaise. It is the forced need in public life to be a Maoist Nepali, an EhMaLey Nepali, a Kangressi Nepali or one supporting this or that party. This downward slide began in the mid-1990s with the situation so bad in villages that the division extended even to clans and their social functions. If you were a Kangressi Nepali villager, you did not go to a Communist relative’s wedding and vice versa, an untouchability phenomenon known as “pani bara-bar”! It has now gotten much worse in the last decade with the disease spreading to the senior civil service, university teachers, professional engineering and medical organizations, and recently even with police chiefs, ambassadors and judges! It is impossible for a non-partisan, ordinary Nepali to expect any reward for meritocracy unless you kowtow before a party oligarch.

This madness is now forcing people like me to ask if King Mahendra was indeed right to claim in December 1960, as he disbanded the Westminster model parliament and banned political parties to implement his Panchayat model of democracy, that “Nepali ko laagi dalgat byabastha aphaap siddha ho”, i.e. party system is inauspicious for Nepal. This is a strange reflection for someone like me to be forced to indulge in. After all, I too fought for the restoration of multiparty democracy in 1990 and was arrested with about a thousand intellectuals in that celebrated peaceful protest program at Tribhuban University on 20th March 1990 which gave new impetus to the sputtering agitation by the Kangress and United Left Front. It is the utter moral degeneration of the current crop of intellectual midgets masquerading as senior political party leaders that is forcing this revaluation. Lest we forget, they have been in power practically since 1990, despite their manifold failures in the last quarter of a century, any one of which would have seen their political banishment from public life in any other self-respecting country. Not the least is also their utter lampasaarbad, i.e. disgusting servility and supine kowtowing before foreign functionaries.

Before you understand me wrong, I do undeniably believe in democracy, but am less and less prepared to call what we have under current Loktantra a democracy at all. I do believe in the right of citizens to freely organize as per their political persuasion, but have to admit that such organizing has to occur under some disciplining “traffic rules” as well as the upholding of some moral values. If we have a multi-party system, I believe we should also have a multi-party culture (which we absolutely do not) wherein the rules of the game, including majority rule but with the right of minority dissent to be listened AND responded to, are respected and upheld; that peaceful transfer of power means just that and not debilitating sulking and conspiracy of vote-buying the day elections are lost; and that every citizen’s vote matters and not just that of those with the most money.

In 1960, King Mahendra, despite what Kangress apologists say, was faced with national revolt not just from sidelined traditional forces but also the communists who felt completely marginalized and alienated as the Kangress went ahead with distributing the spoils of office. (The Dalda Ghee and many other such scandals need to be re-visited to get a more honest picture of the social unrest that was brewing, just as thirty years later, a similar behavior by the Kangress leadership gave rise to the Maoist insurgency.) With Loktantra, things have gotten much worse as the auctioning of public office to the highest bidder clearly shows. These leaders and their international cheer-leaders used to say the King was nirankush, i.e. an autocrat, more properly translated from Nepali as having no restraint. At least the King was bound by tradition and the need to assure the acceptability of his dynasty for generations to come; the current coterie of oligarchic political leaders have shown that they face no restraint whatsoever, not political, not constitutional, not party discipline, not even that of moral opprobrium.

What King Mahendra attempted with his Panchayat was to find an alternative model of democracy that had some element of self-discipline in it and was in consonance with the country’s history and culture. The Westminster model that India continued to work under as a successor state to the Raj and which the rest of South Asia unthinkingly adopted has severe built-in dissonance with Asian society’s fabric. This has become apparent in Bangladesh, Pakistan, Sri Lanka, Myanmar and even in India itself. Today, when criminals and shady businessmen buy their way into parliament, and the game of looting the public coffers is the only business in town, the need to re-think democracy has been urgent. There was an opportunity to do just that with the restoration of multiparty democracy in 1990; but while getting a few things right with that constitution, we failed to ensure proper separation of functions which eventually led to a systemic deterioration. An MP should have been just an MP representing his constituency, not an executive minister. The provision that you had to be elected an MP to be a minister meant that they became bad representatives of their voters and even worse, ignorant and inexperienced executives that an increasingly corrupt civil service could wrap around their pinkies!

The Maoist uprising 1996-2006 came as a revolt against the Westminster model (not the monarchy, let us be clear, which came later in 2006 from the Mughlani Sahu and EuroAmericans!), and we had another opportunity to rethink and reform our democracy with the Constituent Assembly elections in 2008. The Maoists always claimed (and the Biplav faction continues to claim) that they were not prepared to sink in the quagmire of a Westminster parliamentary system (sansadiya bhaas, in their words, the parliament being termed a butcher’s shop displaying a goat’s head but selling dog’s meat). Unfortunately, not just the dominant Cash Maoists (to say nothing of Kangress and EhMaLaise) but also their primary underwriters and cheer-leaders among the Mughlanis and EuroAmerican donors failed us again in re-thinking democracy to suit Nepali conditions. Under the new constitution of 2015, we have a system much worse than 1990 that cannot even wake up, let alone get up and run.

Where do we go from here? The first and primary task for leaders of public opinion among the academia, media and civil society is to give up the pretense that the 2015 constitution is capable of functioning at all and to start re-thinking development anew. It would help to question the handed-down divine wisdom that the Western model of democracy with elections is the only model, since experience has shown that it has not produced a responsive government. Turkey has recently had to begin that search as the Kemal Ataturk model has not been able to handle XXIst Century challenges before Turkish society. The elections in Uttar Pradesh down South has also brought to sharp contrast the problem with “elect and regret” that the largest state in the Indian Union had been facing over the last decades.

Given that we not only have a giant, interfering Southern neighbour but also another giant (and economically more dynamic) Northern neighbour, it behooves us, in our rethinking development, to look to the Chinese experience as well for lessons. In this, I have found very thought provoking a TED talk by a Chinese political scientist Eric Lee (https://www.ted.com/talks/eric_x_li_a_tale_of_two_political_systems) who argues that China’s one-party communist rule is much more democratic than that of the United States. Very counter-intuitive, but listen carefully to what he argues. A one-party state, it is argued by Western academia, is operationally rigid, politically closed and morally illegitimate. Lee on the contrary shows with data that Chinese one-party Communist rule has, since the 1950s, been adaptable and introduced significant reforms, has promoted meritocracy as per its traditional Confucian ethos, and has gained massive legitimacy because of its performance and delivery.

Given that the 2006-2017 experiment is failing, in our own search for a workable endogenous model, we might have to revisit King Mahendra’s Panchayat and how it delivered much better infrastructure than its successors as well as other systems such as the Chinese one that have worked and delivered as opposed to the grafted Westminster model that has not, and will not again. That is, if we want a system where we can live as proud Nepalis only and not as hyphenated serfs of neo-feudal party oligarchs!