“With Support, People With Disability Can Do Better Deepak” Raj Shakota

Following the earthquakes of 2015, Karuna Foundation has been running projects and programs focusing on the persons with disabilities. As disability in disaster is a new issue in Nepal, Chief Executive Officer of Karuna Foundation DEEPAK RAJ SAPKOTA 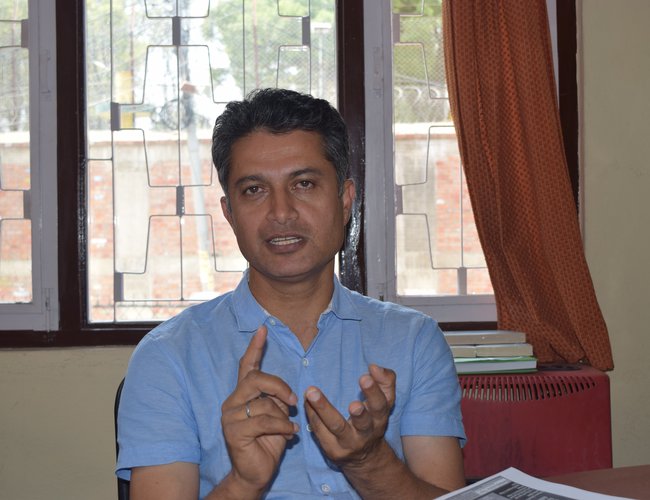 Following the earthquakes of 2015, Karuna Foundation has been running projects and programs focusing on the persons with disabilities. As disability in disaster is a new issue in Nepal, Chief Executive Officer of Karuna Foundation DEEPAK RAJ SAPKOTA spoke to NEW SPOTLIGHT on the topic. Excerpts:

Two years have already passed since the earthquakes, how do you see the state of the persons with disabilities?

Given Nepal’s position as one of the most vulnerable countries in terms of disaster, what have you learnt from the last earthquake?

Although Nepal is prone to disasters and we have suffered a lot from them, Nepal is still unprepared for major disasters. This is a very sad part.

Since your organization has been focusing on the people with disabilities, how do you observe their role?

What other support has Karuna made?

On top of that, we have also built and reconstructed health posts in Rasuwa and Nuwakot districts and handed them over to the community and Ministry of Health. We have been trying our best to share our knowledge and expertise to provide access to them -- making services accessible, not just wheelchair friendly, in every respect. There are currently a number of obstacles for people with disabilities to have access to medical facilities.

What is the number of people with disabilities in 14 districts?

Immediately after the earthquake, we launched programs together with UNICEF targeting the people of with disabilities. We reached out to more than 5000 people with disabilities. We reached more than 6000 people in total through different programs. All of them were severely affected by earthquake compared to other population. The painful part of the story was that they did not have access to relief because of their physical conditions. Once we introduced our program focusing on them, we surveyed the people with disabilities in 14 districts and we found their needs.

Why did Karuna step into relief and rehabilitation?

We were involved in emergency response, rehabilitation and recovery in the aftermath of the earthquake. We do have knowledge of the local context, especially in the field of children/ adults with disabilities and their families. We had a decade-long, hands-on, experience working closely with the local communities. We have been working with government system in the central, district and village levels. Most importantly, the regular project districts of KFN were severely hit by the earthquake. We had a strong network, within the country and at the international level and had vibrant and committed team members.

What happened within the 1st year after the earthquake in the area of disability?

As one of the main areas where KFN is involved is prevention of disability, the KFN identified around 5,000 children with disabilities through a child protection project in partnership with UNICEF Nepal. We reached altogether 8514 children and adult with disabilities. They were supported with relief materials, medical treatment and livelihood support. Drugs and medical equipment support were made to different hospitals including Tribhuwan University Teaching Hospital, Gangalal Hospital and district hospitals in Gorkha, Sindhupalchowk, Kavrepalanchowk, Rasuwa, Chitwan and Dailekh. Medical doctors were deployed in the field to cater with urgent medical treatment to injured cases.

What have you done other than this?

KFN supported around 3,000 earthquake survivors from different districts with temporary shelters where each household was provided with two bundles of CGI sheets. The constructed temporary shelters were of two kinds: Dome-shaped tunnel houses and houses of local design.

Do have you worked in other areas as well?

What have you made in the second year recovery phase?

We are involved in the construction of disability-friendly health facilities. According to the Ministry of Health (MoH), more than 500 health facilities – district hospital, primary health care centre, health post and sub health post – have been damaged by the earthquake alone in the worst-affected 14 districts. In this context, Karuna Foundation Nepal has signed a Memorandum of Understanding (MoU) with the MoH on 6th of July to rebuild 11 new prefabricated model and repair three damaged health facilities in Rasuwa district. As of now, KFN has handed over 3 Health Posts to MOH and rest of the progress is going on.

What support are you giving to schools?

Under School Reconstruction and Inclusive Education, KFN is building 5 disabled friendly schools in Rasuwa District in coordination with School Management Committee. Education materials were supported to 12 schools of the district and all the teachers from schools of Rasuwa were given training on Inclusive Education focusing on disability.

How do you mobilize the funds?

KFN has been working in funding partnership with Reach Out Too, the Netherlands, in order to restore the lives of earthquake survivors in five of the VDCs of Rasuwa viz. Ramche, Bhorle, Syafru, Briddhim and Thuman. The project is about health, education, livelihood and empowerment with the aim to achieve the overall development of the communities.

What about Amir's National Youth Talent Award 2073 winner?
KFN came in contact with Amir after the earthquake of 2015 while implementing child protection program supported by UNICEF in Makwanpur. KFN took notice of exceptional talent of the boy in painting and singing. He is suffering from a condition called Arthrogryposis Multiplex Congenita due to which he is unable to move his body below neck. He paints and writes with his mouth.

How did KFN support Amir?

KFN supported the child and gave him platform to explore his talent. Within a year, with support of KFN, Amir launched his first painting exhibition and music video. He got opportunity to be an apprentice of great artist of Nepal, Kiran Manandhar and music of his song was composed by Nhyoo Bajracharya.  His stories have been featured in many national and International media including UK's Daily Mirror. He won national talent youth award in 2073 and received the honor from President of Nepal.

How is Amir’s example encouraging others?

Amir has become a living example of challenging the stereotype that people with disability are unproductive. With the earnings he made with his paintings he settled all the debts of his family and helped his parents support the family.

What are you doing now?

We are now working to save children from disability, one by one. This is our motto and Karuna Foundation will put all its efforts towards this.

Japanese People Have A Special Sense Of Intimacy Toward Nepal: Ambassador Yutaka Kikuta By Agencies 8 months ago

“Nepal Is A Crown Jewel For Humans Because Of Its Geographic Treasure” Professor Tomohiko TANIGUCHI By Keshab Poudel 9 months, 1 week ago