"I Wish Something … Done For Promotion Of Music" Franck Bernède

Franck Bernède is an ethnomusicologist, an ex-professor at Yale University, a phenomenal cellist and the founder of Singhini Research Center who moved to Nepal in 1999. Belonging to a family of musicians, his being the fourth generation, Franck has known what life for a professional musician in Nepal looks like. With a warm smile and a fresh cup of tea, Franck spoke to Ayushi Sureka, giving Spotlight a slice of his insight. Just like his 17th CE cello, he is a legend forever. 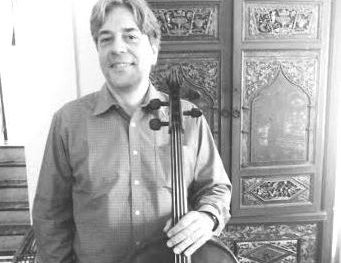 Franck Bernède is an ethnomusicologist, an ex-professor at Yale University, a phenomenal cellist and the founder of Singhini Research Center who moved to Nepal in 1999. Belonging to a family of musicians, his being the fourth generation, Franck has known what life for a professional musician in Nepal looks like. With a warm smile and a fresh cup of tea, Franck spoke to Ayushi Sureka, giving Spotlight a slice of his insight. Just like his 17th CE cello, he is a legend forever. Some inspiring words by Franck: ‘Music is not just a tune, it is a whole language with which people connect everywhere in the world’. Franck beautifully describes a tale of Venetia reflecting the music that lies within nature itself and imitating it is the basic lesson for a music student. He says it wouldn’t be possible for him to have an insight this deep if it weren’t for education because he has learned about so many different values from each culture so yes, it is vital. Excerpts of the views of the virtuoso, Franck Bernède:

When did you step into the music field and who was your inspiration?

I started to play cello when I was 7 and I started my career at the age of 15. My father Jean-Claude Bernède  was a famous violinist and my mother was an opera singer and most of my ancestors were violinists so to answer your question my family has been my inspiration, I was always nudged in that direction. It has been 50 years since I’ve been playing my cello.

How did you stumble upon Nepal?

Because I am involved in another activity, it is like the anthropology of music [or an ethnomusicology]. My field of research brought me here. I started my study from the northern valley and moved to the far-western region for a comparative study. I came to study the cultural system of music in Nepal.

What is the Singhini Research Center?

I am the Singhini Research Center, right here, my home is the center, in the sense that this is an association based in the Newar guthi system. Guthi refers to the promotion and preservation of the Himalayan culture, especially music and dance. It started in 2001 and in 2004 we had a huge 4.5-hour long program where we performed in front of 2000 people. Several Nepalese artists, about 60 of them, went through this channel that plays worldwide- Europe, US to name a few.

How important do you find is the role of education?

I am French, I did my studies in France and Finland then I started my professional career doing concerts abroad. It is true I dropped out of school after grade 6 but later I did a Ph.D. When I was young, my father gave me two choices, he said, "Do you want to pursue your classical studies or do you want to concentrate on musical studies?" It was clear for me at the time but yes, I believe musical education is a must. Here in Nepal it is difficult to thrive as the localites have very little knowledge.

What is the life of a musician in our country, especially the income?

To draw income from Nepal as a musician is extremely difficult for several reasons - one is that the music I am originally playing interests not everyone. Some appreciate it, but many don’t. Secondly, in general, people here don’t see music as something that is worth paying for, I believe, they want it to be free! It is the mentality to not spend money on a cultural program which is why even the local talents have to go abroad to survive and have a quality life. I wish something could be done for the promotion of music among the general public. But looks like I did the reverse eh?.

Could you describe one of the fondest memories during this journey?

Playing on a stage, that too solo, can be nerve-wracking. When you are on the stage you need to not only play the tune but prove that you are capable and make those countless hours of practice worth it. One of my concerts took place in Jakarta, Indonesia, where I was asked to perform solo in front of 1200 people. That was a concert that holds a special place in my heart because when I was up there, it was exceptional. Everything was in a perfect balance where your fingers could play for hours, you are in a sort of state of grace and utter peace.

To sum up, what has fascinated you about the cultures and musical aspects of Nepal?

I love Nepal. I love the culture and I love absolutely everything. It has an enormous amount of talent but maybe the youngsters fear the amount of determination required. I have been involved with mainly two different zones - the Newars in hilly regions and the people in Terai. In the Newar system, what fascinates me is how they use sound as a part of their worship and divinize it which has a philosophical touch to it. It uses music to ignite a sense of spirituality and purity while the musical pattern in Terai is honestly not something extraordinary but the aesthetics and the passion are remarkable. The music system here focuses mainly on the rituals, devotion to God and it recites great epics through it is like the disappearance of the king in the 18th CE or the unification of Nepal. These places are meaningful and much more advanced musically than other regions, their emotional drive is something that has helped me connect to my cello on a whole new level which I probably never would have. Both these experiences were fruitful for me and I truly thank the people involved from the bottom of my heart.

Ganga To Mississippi: Walking With The Rainbow By A Correspondent 2 months, 3 weeks ago