Although the second phase of local election is under way, the absence of RJPN, a strong Madheshi group, will pose a question of legitimacy 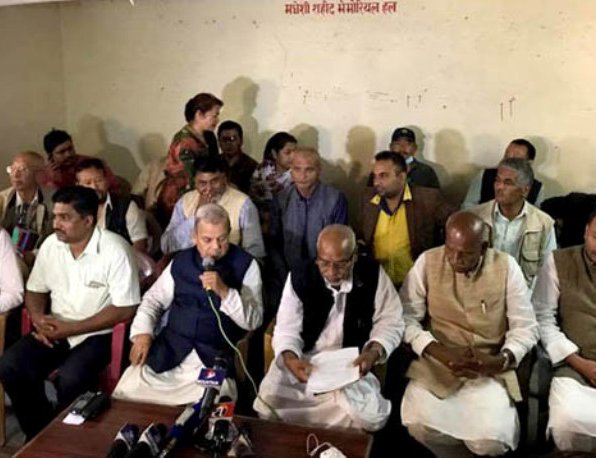 Although Rastriya Janta Party Nepal (RJPN) has called a boycott of the impending local elections, candidates from three main parties, along with scores of others, are contesting the elections.

RJPN, a splinter of Maoist led by Netra Bikram Chand and a monarchical group are not taking part in the election. Chand’s party has already announced a series of programs to disrupt the polls.

Although the constitution is on the way to achieving its legal and constitutional mandate of holding the polls, what it will fail to put to rest, as in the past, is the question of legitimacy.

Since the current political and constitutional process is a part of the then Maoist and seven-party agreement, the opposition of the Maoist faction, led by Chand, and RJPN will directly raise the legitimacy question on the constitution and entire process.

“Since Madheshis and all other forces are taking part in the elections, the boycott of RJPN and Chand Maoist party cannot make any difference. This is the constitution passed by 90 percent of members of Constituent Assembly,” said K.P. Sharma Oli, leader of CPN-UML.

Leaders of other two parties Nepali Congress and Maoist Center also hold similar views. However, when ninety percent of members were discussing the constitution, a large section of citizens in the plains were holding violent demonstrations against the process.

As in the first round, Nepali Congress, CPN-UML and Maoist Center are likely to be the three main contestants in the elections. Although two other Madhesh based parties, Sanghiya Samajbadi Party and Madheshi Janadhikar Forum Democratic, are also contesting, along with several other ethnic parties, the split of votes among them will benefit the main three parties.

As these two parties have some sort of presence in the southern plains and hills, three major parties have picked them up for their electoral alliances. Maoist Center and Sanghiya Samajbadi Party have forged alliance in Dharan Municipality. Similarly, CPN-UML and Madheshi Janadhikar Forum Loktantrik have joined hands in Biratnagar Metropolitan City, the largest municipality in eastern Nepal.

Nepali Congress and Maoist Center are contesting the elections jointly in many parts of provinces No. 1, 5 and 7 against CPN-UML. In the plains, the decision of RJPN to boycott polls will benefit Nepali Congress.

Newly formed Naya Shakti, Sajha Party and Bibeksheel are also making efforts to win some of the seats; it is unlikely that they will challenge the three parties' strong presence in districts.

Following the change in its stand on monarchy and religion, RPP-Nepal, the fourth largest party, is now struggling to keep the vote it received in the last elections.

As the election process moves ahead, it is unlikely that the elections in the three provinces in 1, 5 and 7 will be postponed. Given the number of participation of political parties, there is no way to question the elections constitutionally and legally. However, the elections without the presence of RJPN will continue to have the question of legitimacy.

Nepal has practiced six constitutions and held several rounds of local and central elections under those constitutions. However, these constitutions died for failing to establish their legitimacy. If the constitution follows the current path, one cannot rule out its possibility of facing a similar fate.

CPN-UML Preparing For Convention By A Correspondent 2 weeks, 2 days ago

GOVERNMENT Shaky Coalition By A Correspondent 2 weeks, 4 days ago