For Whom Nepal’s Storage Projects Toll?

The Electricity Development Decade 2016/2026 was recently launched by Nepal’s Energy Ministry to eradicate the decade-long national electricity crisis. One of the major thrusts of this crusade that envisages commissioning 9,935 MW of hydropower plants within the 2016/2026 decade is on the 11 storage projects with an installed capacity of 5,373 MW 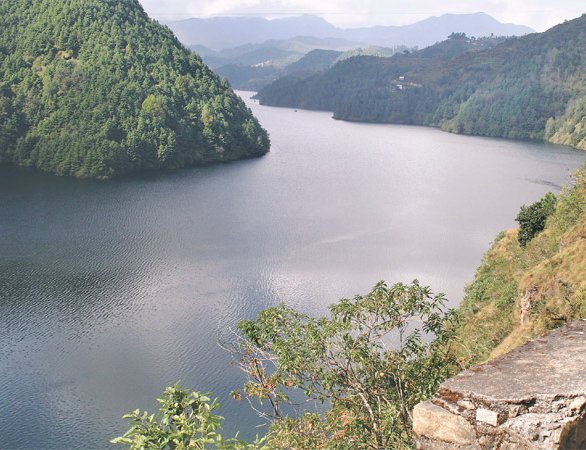 Nepal’s Electricity Development Decade 2016/2026: The Electricity Development Decade 2016/2026 was recently launched by Nepal’s Energy Ministry to eradicate the decade-long national electricity crisis. One of the major thrusts of this crusade that envisages commissioning 9,935 MW of hydropower plants within the 2016/2026 decade is on the 11 storage projects with an installed capacity of 5,373 MW. These storage projects are in addition to Nepal’s 10,800 MW Karnali Chisapani Multipurpose Project[1] of many decades ago now being readied for ‘re-activation’ at an appropriate[2] time. Already in Nepal’s ‘electricity development’ net is the 3,300 MW Saptakoshi High Dam that has strategically roped in the Sunkoshi-Kamala Storage-cum-Diversion scheme[3]. The 6,480 MW Pancheshwar Multipurpose Project, ratified by the Nepalese Parliament in 1996 for making Nepal’s ‘sun rise from the west’, is still stuck in deep quagmires[4]. Nepal’s Electricity Development Crusade 2016 totally ignores Nepal’s strategic position in the Ganges basin. India’s thirst for freshwater will increase to formidable proportions by 2050 when her population is expected to stabilize at around 1,640 million[5]. Nepal studiously fails to read the writing on the wall: India’s most burning problem is freshwater.

Water Scarcity in Ganges Basin: The World Bank’s 2012 Ganges Strategic Basin Assessment[6] (GSBA), though a contentious document for Nepal, has a wealth of valuable information. The Ganges basin, as per the 2011 census, has a population of 656 million where 576 million Indians live (47 percent of India’s population). Nepal’s three bordering States of UP (199 million), Bihar (104 million) and West Bengal (91 million) have a staggering combined population of 385 million, far greater than that of USA. The Ganges basin has the world’s highest population density and as a consequence poverty level borders that of sub-Sahara region. This is India’s Hindu cow belt where water is increasingly getting scarce. To tackle this dire thirst of the Ganges basin, India’s National Water Development Agency (NWDA) prepared a National Water Master Plan with inter-basin water transfer – from the water rich basin in the east to the water poor basin in the west – thus giving birth in 1987 to the Interlinking of Rivers (ILR).

India’s Interlinking of Rivers (ILR): This Interlinking of Rivers has two major components, the Himalayan and Peninsular. The Himalayan component[7], where Nepal’s role is of vital importance, has 14 links with 6,099 km of canals, 9 big dams to provide 200/250 billion cubic meters (BCM) of additional water for irrigation benefits to 22 million hectares of land and provide 1,120 cumecs of water for flushing the Kolkata Port besides generating 30,000 MW of hydropower. The Peninsular component has 16 links with 4 777 km of canals including 94 tunnels, 27 big dams to provide 84 BCM of additional water to irrigate 13 million hectares and generate 4,000 MW of hydropower. Nepal, despite having a mere 13% of the total Ganga basin catchment area, contributes 47% of the average annual flow of the Ganges but during the critical dry months of February, March and April Nepal’s contribution to the Ganges flow increases[8] dramatically to as high as 75%.

Nepal in ILR’s Himalayan Component: Without storage projects in Nepal, India’s River Linking Project will remain in her drawing boards. Among the 14 Himalayan Links, the following five Nepal-related links are of vital importance to India:

· Gandak-Ganga Link: to be fed by 263 meter high Budhigandaki dam, live storage of 4.25 BCM and 1,200 MW of hydropower – Budhigandaki Project already in Nepal’s construction mode with 50% of the US$ 1 Billion promised by Prime Minister Narendra Modi during his visit to Nepal in 2014.

· Ghagra(Karnali)-Yamuna Link: to be fed from 270 meter high Karnali Chisapani dam, live storage 16.2 BCM of water and 10,800 MW of hydropower; Karnali Chisapani Dam on the verge of being ‘re-activated’ with Nepal Government Notices already floated to stop all construction works within the reservoir’s submergence area.

· Sarada(Mahakali)-Yamuna Link: to be fed from 315 meter high Pancheshwar Dam, live storage 6.6 BCM of water and 6,480 MW of hydropower[9]; Pancheshwar multipurpose project ratified by the Nepalese Parliament in 1996 and the instruments of ratification already exchanged between the two governments in 1997.

These over 263 meter (868 feet) high four dams in Nepal, sitting atop a seismically active zone, have a live storage of 36.5 BCM of water. The famed 226 meter high Bhakra Nangal dam, that Nehru termed ‘temple of resurgent India’, has a live storage of 6.9 BCM.

Nepal’s Storage Projects in Electricity Development Crusade 2016/2026: To supplement the above mentioned massive storage projects, the Government of Nepal has now embarked on the following 11 storage[10] making crusade projecting even the estimated completion date. 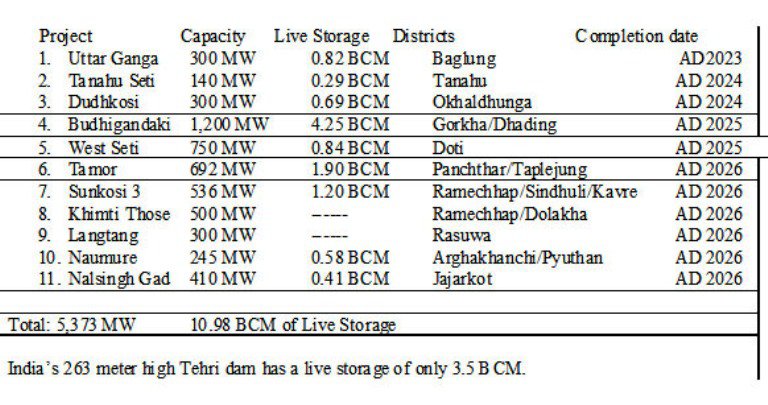 · Storages in Nepal can ‘double lean season flows’, but agricultural productivity in India is ‘currently very low’ from such augmented flows. For Nepal, this again translates to: despite doubling the lean season flows, delete all downstream irrigation benefit!

· These finally translate to: Nepal should develop hydropower on a fast track mode forfeiting all downstream benefits!

There is, thus, complete harmony among the three concerned stakeholders: i) India, the downstream riparian, in dire need of storages in Nepal to augment the diminishing Ganges flow ii) the financing institution World Bank, the honest broker, strongly recommending Nepal to ride on the wave of significant hydropower trade with negotiations simpler that previously thought of and iii) Nepal, the Storage Provider, straining at the leash to gleefully plunge into the crusade of developing 10,000 MW in ten years – 2016/2026!

Conclusion: Nepal has consistently failed to see the larger picture on the wall – Nepal’s strategic position as the water tank of the Ganges Basin.

· The two Contracting Parties being equally desirous of attaining complete and satisfactory utilization of the waters of the commonly share rivers, undertake to (i) plan new uses or projects subject to the protection of the existing uses on the rivers and (ii) cooperate with each other to formulate and modify the planned new uses or projects taking into consideration the water requirements of the parties.

· success of an Indian water strategy to meet the growing water demand …..hinges on Nepal;

· fundamental flaw……Nepal has been trying to sell electricity while it is water that India needs;

· short-sighted on the part of India to continue pursuing the current strategy which pins its hope on overcoming, by default, the impending water crisis through power projects;

· India should concede that regulating the Ganga waters is her primary concern; Nepal must…..redirect its efforts from trying to sell electricity to fulfilling this need for regulated water;

· Most importantly, ……stored water has monetary value and that this price must be attractive enough for Nepal to find it viable to design and build projects that optimize water storage instead of maximising power generation only!

The fundamental flaw Bhim Subba pointed out in 2002, Nepal desperately trying to sell electricity while India desperately trying to get free stored water through Nepal’s default, continues to this day of 10,000 MW in 10 years crusade. The Bhutanese Bhim Subba argues that stored water has monetary value and that the price of this stored water must be attractive enough for Nepal to find it viable to design and build projects that optimize water storage instead of maximizing power generation. Such a policy would be “mutually beneficial” and thus create a win-win environment for both the countries.

For the Nepalese policy framers of 10,000 MW in 10 years and 20,000 MW in 20 year crusades, the above prescription of a Bhutanese of Nepalese origin would indeed be a very bitter pill to swallow. Besides the live storages of 32.2 BCM from Pancheshwar, Saptakosi and Karnali Chisapani, these policy framers are hell-bent on developing over 5,000 MW of 11 storage projects to avail an additional 11 BCM of regulated water GRATIS to India. India’s controversial 263 meter high Tehri dam, showcased to all Nepalese VIPs visiting Delhi, has a mere live storage of 3.5 BCM! By forgoing the value of stored water and by forfeiting the huge social and environmental costs, Nepal is venturing into the storage building ‘jihad/crusade’ where even angels fear to tread!

[1] Under the UNDP grant, 410 Nepalese engineers graduated from India’s premier Roorkee University for employment in the 10,800 MW Multipurpose Karnali Chisapani Project. The first batch of 50 Nepalese students was sent to Roorkee in 1982.

[4] Some key issues are: sharing of project cost in proportion to accrued benefits, assessment of power benefit as compared with ‘relevant’ alternatives available, equal entitlement of Mahakali waters without prejudice to their existing consumptive uses, precludes the claim in any form the unutilized portion of the Mahakali waters etc. etc.”

[6] This GSBA is a World Bank South Asia Regional Report for Discussion of Regional Opportunities and Risks published in 2014.

[8] Overview: Conflicts Over the Ganga? By SB Pun in Disputes Over the Ganga edited by Bhim Subba and Kishor Pradhan for Panos Institute South Asia. 2004. Kathmandu.

[9] Nepal, with the belief that peaking power has a high value in India, had the Pancheshwar DPR prepared for 6,480 Mw. Media reports that India has downsized this capacity to 5,600 MW to optimize regulation of stored water.

[11] Live storage figures indicated in this chart were kindly availed by Engineering Services/NEA. Writer regrets live storages of Langtang and Khimti Those could not be availed.

[12] This GSBA study was led by Claudia Sadoff and Nagaraja Rao Harshadeep of the World Bank.

[14] Bhim Subba in Water, Nepal and India in Kanak Mani Dixit and Shastri Ramachandaran edited book State of Nepal. 2002. Himal Books. Lalitpur Nepal. Bhim Subba, Bhutan’s first electrical engineer, worked for the Royal Government of Bhutan from 1975 onwards heading the kingdom’s power department from 1986. But in 1991, he landed up in Nepal as one of the 125,000 Bhutanese refugees. He has authored Himalayan Waters, 2001, published by the Panos Institute South Asia, Kathmandu. Like all Bhutanese refugees, he has migrated abroad. This Bhutanese refugees episode is another shameful state of affairs of the 28 million nation bullied by a nation of 600,000 – a 1991 population census claimed by Bhutan government! With over 100,000 Bhutanese kindly resettled in their countries by the governments of USA, Canada, UK, Australia etc., Bhutan still continues to bully Nepal by refusing to take back her remaining 12,000 citizens, languishing at the Jhapa refugee camps!

Pun is a former MD of NEA

Here’s How Governments Can Reduce The Impacts Of Asia’s Devastating Flash Floods By Rabindra P. Osti 3 days, 7 hours ago

Make In Nepal By Hemang Dixit 4 days, 17 hours ago