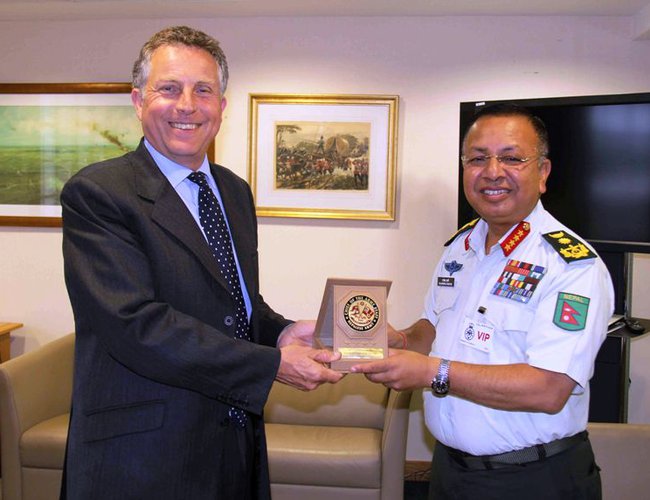 Although Nepal Army and British Army has always minatainted two centuries old tradtional reltaions freindlly, there are certain hicups in the past few years. Followign the recent visit of COAS General Chhetri, the traditional relations comes to at normal stage as in the past.

As Colonel of Nepal Army Kumar Lama was arrested in the London in the case related to conflict period, Nepalese Army took the incident as unusal and against the traditional freindship between the two countries.

However, the recent official visit of COAS General Chhetri to United Kingdom helped to bring the rleations back in track. With COAS General Chhetri’s series of meeting with his counterparts and senior Army offiicals, there return the warmeth relations betwen two armies.

COAS General Chhetri was informed the modernization in British Army and bilateral relations between Nepal and United Kingdom. He also inspected 19 Regiment Royal Artillery of British Army and attended the Dinner hosted by Nepalese Embassy in London.

COAS Geneal Chhetri  visited England follwign participation in Chiefs of Defence Conference ofTroops Contributing Countries-TCC  in New York. As a fifth largest contributing Army to UN Peacekeeping, COAS visit has its own significant. During his visit to UN Headquater, COAS General Chhetri engaged in series of metting with high rankig UN Officials and COAS General Chhetri persuaded Npeal’s case as Nepal is aiming to increase the numbers of Peacekeepers in UN.

As an oldest organisations of Nepal, Nepal Army has a role to play. Given its prestige and expertise in peacekeeping, Nepal Army can support to promote and protect Nepal’s interest. Given the growing clout of military diplomacy, Nepal Army has been pursuing its role to safeguard and strengthen Nepal’s image in the global order. The recent visit of COAS General Chhetri has proved it again.

“My Visit To United Kingdom Was Successful” 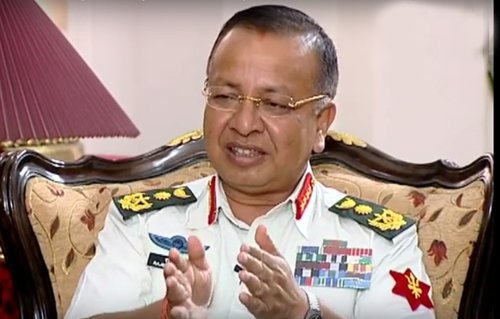 How do you see your recent visit to United Kingdom?

My visit to United Kingdom was successful and the visit paves the way to further strengthen the existing relations between Nepal and United Kingdom. Our two armies have more than two centuries old relations and it remains cordial and strong. We discussed on the issue of the British Army’s previous military support. We also discussed on the continuation of training provided by British Army to Nepali Army. Some British Army personal came for training in Nepal in the past. We wish that needs to continue. British Army supported in the past providing training to enhance capacity of Nepal Army. We also talked on the issue.

After the arrest of Nepal Army’s Colonel Kumar Lama and three British Helicopter returned from Nepal, there reportedly deteriorated. Is this visit normalizing the relations?

Melamchi Water To Reach Kathmandu On Saturday, Urged Locals To Cautions By Agencies 1 hour, 5 minutes ago

PPE And Reproductive Health Kits Handed Over To Nepal By NEW SPOTLIGHT ONLINE 21 hours, 40 minutes ago

India Tightens Security At Jamunah Checkpoint In Nepalgunj By Agencies 3 days, 2 hours ago