New research, published Wednesday in Science Advances, found that 75 percent of the population of South Asia will experience extremely dangerous heat waves by 2100 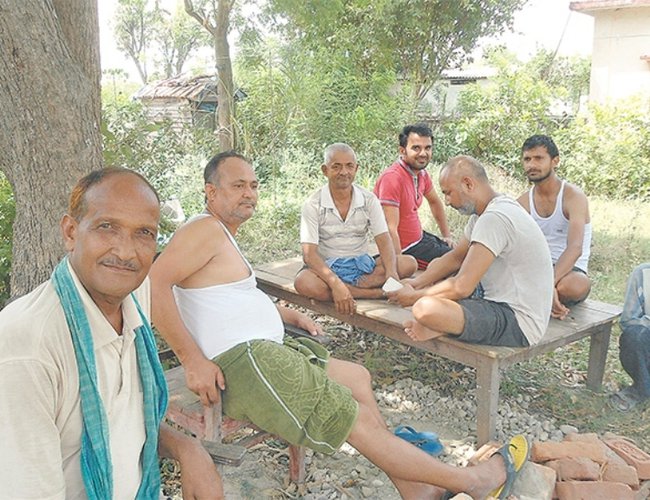 Higher temperatures and high humidity are likely to create unlivable conditions in parts of India, Bangladesh and Pakistan in the coming century.

This study focused on South Asia — defined as the countries of Pakistan, Indian, Bangladesh, Nepal, and Sri Lanka — because here there is a coincidence of very high wet-bulb temperatures and a dense population of relatively poor, rural people. That makes this the most vulnerable part of the world to future deadly heat waves.

The Indus and Ganges river valleys, spanning southeast Pakistan, northern India, and Bangladesh, have a disastrous combination of a densely populated, vulnerable population and extreme, humid heat. In these parts of the world, extreme heat is already frequent and deadly. A 2015 heat wave that covered large parts of India and Pakistan killed an estimated 3,500 people.

According to a new study, the populations of south Asia are at particular risk from projected increases in the intensity and frequency of heat waves, according to a new study that projects the combination of higher temperatures and high humidity will lead to conditions at or exceeding the upper limit of human survivability.

While rising global temperatures associated with the continuing increase of atmospheric greenhouse gases will drive heat waves around the world, particular dangers will be faced by agricultural workers and others who will continue to work outdoors in large parts of India, Pakistan, Bangladesh, and Nepal, suggests the paper published in Science Advances.

More than 1.7 billion people live on the Indian subcontinent and the population continues to grow, with India expected to overtake China as the world’s most populous nation by 2025.

These are the highest recorded wet-bulb temperatures through 2015 in degrees Celsius.

While most climate change studies look only at temperature, this one uses a different measure that accounts for the impact of humidity on the ability of humans to cool themselves off through sweating. It’s called wet-bulb temperature, and it measures how hot the air would be if cooled through the evaporation of water until it reaches 100 percent humidity.

When humans sweat, that moisture evaporates into the air, which transfers heat energy away from the skin. However, when the wet-bulb temperature reaches the temperature of the skin, at about 95 degrees Fahrenheit, it becomes impossible for heat to move away from the body in this way. Even if enough sweat could be produced to bring the surrounding air to 100 percent humidity, the air would still be hotter than the skin, and no energy would leave the body. Previous research has estimated that a healthy human could survive a maximum of six hours in these conditions — which means find a cooler spot, or die.

A wet-bulb temperature of 95 degrees has never been recorded, but parts of the world have hit 89 degrees, which is already extremely dangerous to any human who is exposed to it for more than a short period of time. The hottest wet-bulb temperatures in the world are found in the Persian/Arabian Gulf, in the northern parts of South Asia, and in Eastern China.

If there’s a glimmer of hope, it’s that the researchers found a very significant difference in outcome if the world bands together to aggressively fight climate change. With concerted action to limit greenhouse gas emissions, none of South Asia would surpass the unsurvivable threshold by 2100, although 55 percent of the population would still be exposed to extreme wet-bulb temperatures of 88 degrees or higher.

In any case, humans living in very hot and humid parts of the world will be forced to adapt. That will mean air conditioners for those who can afford it and, likely, communal cool spaces for emergencies. At the most extreme, we may see mass migrations of climate change refugees away from regions of the world that have become literally unsurvivable.

“The most intense hazard from extreme future heat waves is concentrated around densely populated agricultural regions of the Ganges and Indus river basins,” write Eun-Soon Im, of the Hong Kong University of Science and Technology, Jeremy Pal, of Loyola Marymount University in Los Angeles, and Elfatih Eltahir, of Massachusetts Institute of Technology. “Climate change, without mitigation, presents a serious and unique risk in South Asia, a region inhabited by about one-fifth of the global human population, due to an unprecedented combination of severe natural hazard and acute vulnerability.”

The key factor issue, the authors say, is ‘wet-bulb temperature’, which is a combined measure of both ‘dry-bulb’ temperature and humidity.

Wet-bulb temperature, or TW, is defined as the temperature an air parcel would attain if cooled at constant pressure by evaporating water within it until saturation. The higher the TW, the less difference there is between human body skin temperature and the body’s core temperature, which reduces the human body’s ability to cool itself.

“Because normal human body temperature is maintained within a very narrow limit of ±1°C, disruption of the body’s ability to regulate temperature can immediately impair physical and cognitive functions,” the authors write. If the ambient air wet-bulb temperature exceeds 35°C, which is the typical human body skin temperature under warm conditions), metabolic heat can no longer be dissipated, and more than six hours’ exposure “will result in death even for the fittest of humans under shaded, well-ventilated conditions”. 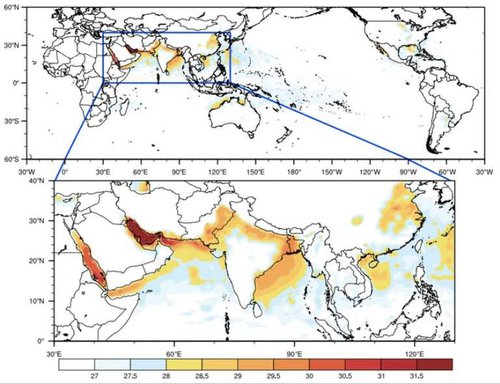 Thus while TW well below 35°C can pose dangerous conditions for most humans, they regard 35°C as the upper limit on human survivability in a natural, non-air-conditioned environment.

The study makes TW projections using simulations based on two scenarios, or representative concentration pathways, for future greenhouse gas levels used by the Intergovernmental Panel on Climate Change. One is RCP 8.5, the highest scenario, commonly referred to as the business-as-usual scenario, though the IPCC itself no longer uses such a description. The other is RCP 4, which assumes moderate mitigation efforts that contain global warming to about 2.25°C over the century – slightly higher than the target to which most of the world’s nations have committed.

Those simulations project that, by the end of century under the RCP8.5 scenario, wet-bulb temperatures will exceed the 35°C survivability threshold at a few locations in northeastern India and Bangladesh, and approach it over most of South Asia, including the Ganges river valley, northeastern India, Bangladesh, the eastern coast of India, Chota Nagpur Plateau, northern Sri Lanka, and the Indus Valley of Pakistan. Under the RCP4.5 scenario, vast regions of South Asia are projected to experience episodes exceeding 31°C, “which is considered extremely dangerous for most humans”.

They note a particular dilemma for India, whose greenhouse gas emissions have been increasing rapidly in recent decades because of the population and rapid economic growth – a trajectory that, perversely, is “likely to impose significant added human health risks to some of its most vulnerable populations”.

WVIN Working For Change By A Correspondent 6 months, 4 weeks ago

A Search For Genderless Talent By Susmita Aryal 7 months, 1 week ago

Women In Leadership By Aagya Pokharel 8 months ago

IUDP A Game Changer By Keshab Poudel 11 months, 3 weeks ago

WORLD VISION INTERNATIOAL 15 Years Of Partnership By A Correspondent 1 year, 1 month ago