With almost two decades in the legal business, Gandhi & Associates, a Nepali law firm, has proven itself as a modern corporate law firm, manned by young and old lawyers of note. With a renowned person like RAJU MAN SINGH MALLA, former law secretary, behind it, the law firm has a jewel in its crown. At a time when Nepal is asking foreign companies to come and invest in Nepal, Malla spoke to NEW SPOTLIGHT on various issues. Excerpts: 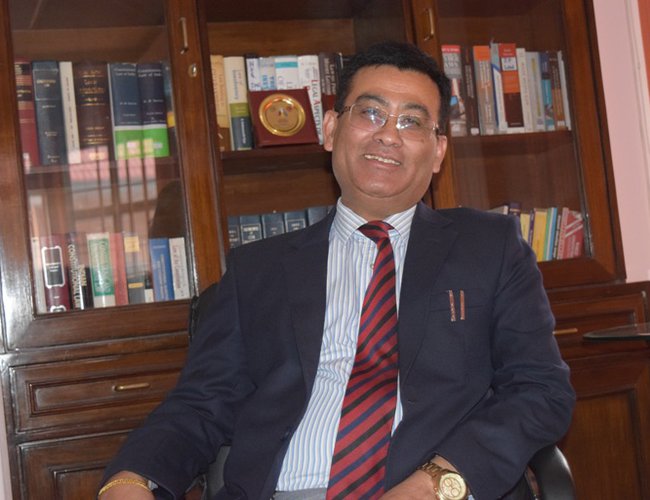 With almost two decades in the legal business, Gandhi & Associates, a Nepali law firm, has proven itself as a modern corporate law firm, manned by young and old lawyers of note. With a renowned person like RAJU MAN SINGH MALLA, former law secretary, behind it, the law firm has a jewel in its crown. At a time when Nepal is asking foreign companies to come and invest in Nepal, Malla spoke to NEW SPOTLIGHT on various issues. Excerpts:

Having worked in different positions in the government, drafting laws, how do you see Nepal’s legal regime in the context of foreign investment given the frequent complaints by investors that Nepal’s laws have much ambiguity?

So far as foreign investments are concerned, Nepal Government itself is encouraging the foreigners to invest in Nepal. Nepal’s policy is very much investor friendly.  For this, laws and other processes need to be investment friendly as well.

How many related laws are there?

Don’t you see any legal ambiguity?

So far as your question on legal ambiguity is concerned, it is difficult to say which act is simple and which is ambiguous -- whether the language is simple because of words or it is complicated because of the system prescribed by the laws, whether there is a system for effectively implementable acts or not? Only after intense brainstorming and discussion can we say the act is supportive to achieve its objective or not.

How investment friendly are our acts?

At present, we have been talking about the global village. The globe is now very narrow because of the development of the IT sector. All the countries are close to one another as we can get all kinds of information of any country within a matter of time. There is no more the idea of near and far as it used to be. If an investor wants to invest in a particular country, he or she can acquire all the necessary information for foreign investment in the shortest possible time.

It is said that Nepal’s legal systems are in isolation?

No country can economically prosper in isolation. If a country wants to see economic development and prosperity, the country must present itself as competitive for investment. It is natural for investors to see whether the investment in Nepal can bring benefits to them or not? What is the rate of return? How can one expatriate the profit without any hassle? Without legal diligence, no investor can invest money in Nepal. The present state is that nobody can cheat others at present. As I said, if one country wishes to have economic development, it must go side by side with other country. We need to draft the law for us. However, our law should be compatible in the international context as well.

Investors are complaining that major institutions like Department of Industry, Central Bank, Department of Labor and Immigration Department are working in isolation, creating so many hassles for investors. How do you look at this?

Two issues like who is responsible to permit foreign investments and how to bring the FDI are involved in all this. Under the Foreign Investment and Technology Transfer Act, 2049 (1992), Department of Industry is responsible to permit the investment under FDI. Foreign Investment and Technology Transfer Act – 1992 & Industrial Enterprises Act -1992 are the two most important acts for the promotion of industries in Nepal. These two acts are highly encouraging acts for attracting FDI or Joint venture investments in Nepal.

Besides, there is a high level committee under the chairmanship of Ministry of Industry, which can permit foreign investment. If it is a joint venture agreement, they have to fulfill all formalities. The act has clearly said that foreign investment cannot come without the permission.

How do you see the repatriation?

Every investor wants to repatriate his or her profit to their country.  So far as repatriation of foreign exchange is concerned, the Foreign Investment and Technology Transfer Act has a clear provision on this. However, the foreign currency related issue falls under central bank. Here also, two institutions DoI and NRB are involved. Both have their own jurisdictions. There are also demands for one window. These are two different issues, foreign investment and currency repatriation. There is an overlap of authority. Both the institutions have the right to exercise their jurisdictions as per the law. However, what is required is a strong coordination between them. Only Nepal Rastra Bank can regulate and monitor the foreign currency issue. Thus, it is natural for it to monitor and regulate the foreign currency deal. Nepal Rastra Bank needs to be well informed through a proper mechanism. There is the need to have coordination between DoI and Nepal Rastra Bank from the initial stage. It is not a hassle, if there is proper coordination between them; there is no question of overlapping of laws.

There are complaints that each institution is working differently. How do you look at this?

Every institution needs to work under the legal jurisdiction. I don’t see any lacuna and shortcoming in law. There is the need to have strong coordination. It is not proper to provide FDI to a single institution. As per the act foreign investors  are  equally treated  as  local  investors  and  the  same  acts  prevail regarding incentives and facilities to foreign investors. As per the act, DOI is only a recommending body whereas granting of visa is the authority of the Immigration Department and issuing labor permit is domain of the Department of Labor. Similarly, the central bank is responsible for repatriation of profit in foreign currency.

Even after the permission granted from DoI for investment, the investor has to face all kinds of problems including land acquisition, immigration and labor permit. How do you look at this?

Laws are drafted as per the policy of a country. The fundamental of law drafting is to translate the state policy through the law. Laws are the reflections of state policies in investment, land acquisition and foreign currency repatriation.

There are also reportedly many complications for immigration for foreign experts and even the foreign investors even if they have the valid documents from all the concerned ministries departments. How do you look at this?

As I have mentioned, it is not a result of any ambiguity of law. However, it is the lack of coordination among the departments who work under their own jurisdictions. As DoI is the final authority for foreign investment, its recommendations should be final for all. Once a foreign investor is permitted to invest in Nepal, the act empowers him to hire experts required by his company. Under the DoI’s recommendation, one should be given permission by labor law. Under the labor law, it is the jurisdiction of Department of Labor to issue work permit. However, it is related to two departments. As per the jurisdiction, it is the right of each of ministry to work under the law. However, the question is how to implement it. During the process of implementation, there is the need to have harmonious approach as per the policy of state. If each organization starts to think about their own role and supremacy, it will hamper the state of FDI friendly policy. Here comes the issue of coordination. As DoI is responsible for the FDI, all other government departments have to abide by DoI’s recommendations. The problem in Nepal is the implementation stage when there are hurdles. Once the regulatory authorities like DoI give recommendations, they should be final.

If the laws are good and policies are good, what is wrong then? Can you suggest the way to address the problems?

What is required is coordination in implementation. Once there is a lack of coordination, problems emerge. Our basic requirement is coordination in dealing with foreign aid. If the decision comes through a process and jurisdiction, no one should create hassles. If there is any delay, the law should speak about it clearly. Whether the issue appears in the context of issuance of visa, license, work permit or any other areas, the decision should not be taken arbitrarily.