Young and dynamic, joint secretary Yam Lal Bhoosal is the spokesperson of the National Reconstruction Authority. As a hard working bureaucrat, Bhoosal spoke to New Spotlight in response to the complaints about the lackluster reconstruction process and on various related issues. Excerpts: 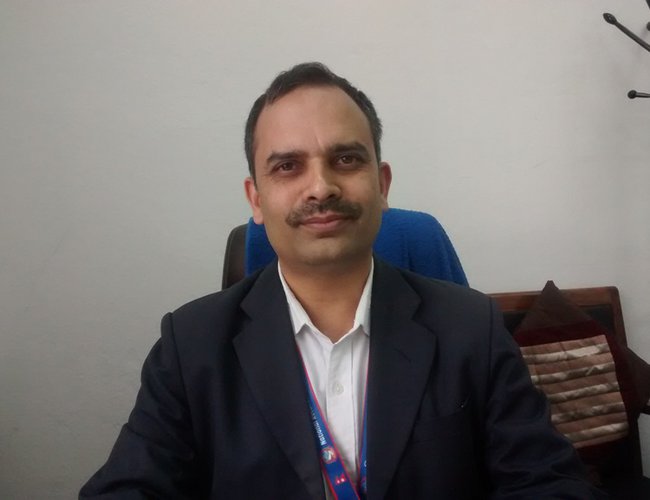 There are complaints over the delay in the reconstruction process. Is the delay due to the procedures or something else?

It is true that the reconstruction process was initially slow due to various factors.  One of the major factors was said to be the regulations related to reconstruction. We don’t need to panic now as the situation is very encouraging. With the amendment of Private Housing Grant Rule, the pace of reconstruction has taken off. We have amended certain procedures as well.

How about the state?

We have already signed agreements with over 632,000 beneficiaries and over 630,000 beneficiaries have already received the first installment and about 57,000 have received the second installment. We have already set our target to complete the reconstruction of private houses within this fiscal year. The recently held NRA's steering committee meeting under the chairmanship of Prime Minister Sher Bahadur Deuba has directed us to complete the reconstruction of private houses. We are strictly following this. We will move ahead correcting our shortcomings.

Do you think, after the amendment of rule, the process has been easier?

After the amendment, many clauses, which created obstructions, were removed or new clauses were added to facilitate the process of reconstruction of private houses to take speed. We have been speeding up the reconstruction process and to make to smooth. After this, there are certain changes in the process to go from center to Central Level Project Implementation Unit (CLPIU) and then District Level Project Coordinative Units, Rural Municipality and Ward unit for authentication.  With the approach of decentralization, we directed all concerned authorities to take the decision at the spot.

How about the delay in the inspection and certification by engineers?

After the election of local bodies, all the technical staff, including engineers, are under their direct control. We think the process of certification will accelerate.

How about the local level elected representatives?

NRA also is in the process of developing a working guideline to mobilize elected local representatives to accelerate post-earthquake recovery and reconstruction work from the beginning of fiscal year 2017-18.

What about the persons without land ownership documents?

The persons registered as beneficiary will get the grant. If a person is landless, he or she will get Rs. 200,000.00 in grants under the recommendation of local level. We are collecting the data of such persons. We have now the data system to see the people.

There are also reports that the technical staff are demanding hefty money with people to issue certification. How do you look at this?

We have zero tolerance on corruption. If we receive complaints, we will take the necessary action. In some incidents, we have receive complaints that engineers are not certifying the work to go for the second round. UNDP is supporting NRA in the process of improvement of the houses if the base is not made properly.

Why are the construction activities delayed?

The reconstruction activities, basically, that of housing, has failed to pick up speed due to various reasons, including confusion among housing grant beneficiaries, and lack of motivation, among others. NRA plans to use elected local representatives of the government to give housing reconstruction a boost and facilitate related activities at the local level.

Who are you going to mobilize?

How do you look at the delay in work?

The slow pace of post-quake reconstruction is also due to lack of proper guidance for earthquake victims in rebuilding the damaged physical infrastructure. Local level representatives can play a crucial role to motivate, encourage and assist the local level reconstruction activities.

While two years have already passed since the devastating earthquake rattled the country, the road to recovery has been an uphill climb. What do you want to say?

As I mentioned, the process will accelerate now. NRA has been making all its efforts.

It is reported that NRA stopped issuing the second tranches, why?

The second tranche of housing grant has been denied temporarily to almost 6,000 beneficiaries out of 55,000 applications received as they had not complied with building codes. They could be eligible if they made the necessary modifications as advised.

What do you say of the pace?

According to our information, over 116,000 people have started building houses and 55,000 have already received second tranches and another 16,000 are in the process to receive the second tranche. Just after summer, in coordination with the elected local level, we will complete the reconstruction by next year.