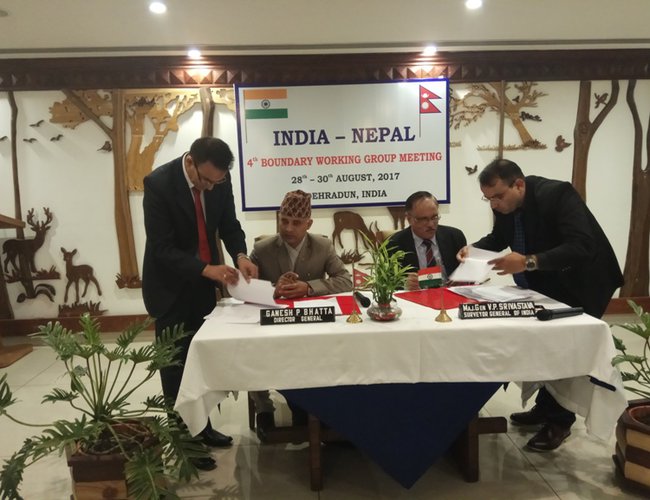 The fourth meeting of Nepal-India Boundary Working Group (BWG) concluded in Dehradun, India with the signing of Agreed Minutes between the two sides.

The meeting reviewed the progress made in the past three years in the boundary related field works as per the mandate of the BWG that include construction, restoration and repair of boundary pillars, as well as works related to the clearance of No Man’s Land and GPS observation of boundary pillars.

The Nepali delegation in the meeting was led by Ganesh Prasad Bhatta, Director General of Survey Department and Maj. Gen. V.P. Srivastava, Surveyor General of India led the Indian delegation. The next meeting of the BWG is scheduled to be held in Kathmandu in August 2018 after the conclusion of the upcoming field works season.

COVID-19: Number Of Children Living In Household Poverty To Soar By Up To 86 Million By End Of Year By NEW SPOTLIGHT ONLINE 15 hours, 2 minutes ago

Twelve Nepali Migrant Returnees Killed and 20 Injured In a Bus Accident In Banke By NEW SPOTLIGHT ONLINE 1 day, 1 hour ago

Nepal Extends Lockdown Until June 14 And Suspended All Flights Till June 30 By NEW SPOTLIGHT ONLINE 2 days, 11 hours ago