Deputy Prime Minister and Minister for Foreign Affairs Krishna Bahadur Mahara, inaugurated the chancery of the Consulate General of Nepal in Guangzhou amid a special ceremony this morning 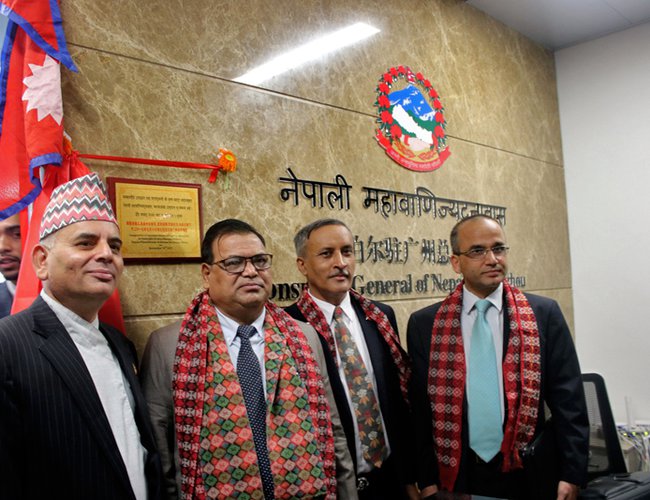 Deputy Prime Minister and Minister for Foreign Affairs Krishna Bahadur Mahara, inaugurated the chancery of the Consulate General of Nepal in Guangzhou amid a special ceremony this morning.

Inaugurating the Consulate, DPM Mahara expressed happiness to have an opportunity to be present in opening ceremony of the Nepali Consulate in Guangzhou and believed that the Consulate would be instrumental for enhancing economic and commercial activities as well as people-to-people contacts between Nepal and the People’s Republic of China.

DPM Mahara also held a meeting with the Governor of Guangdong Province Ma Xingrui and discussed the matters related to further promoting relations between Nepal and China in general and with Guangdong Province in particular. Ma Xingrui assured of providing necessary cooperation to promote investment and tourism from Guangdong to Nepal.

DPM Mahara participated in the Interaction program on the Investment Opportunities in Nepal organized by the Consulate and addressed the business community. In his address, Mahara informed the Chinese entrepreneurs about the investment climate of Nepal and urged them to invest to seize the opportunities available in various sectors such as hydropower, tourism, construction, agriculture, industrial manufacturing, telecommunication, IT, minerals and service sectors, among others.

Ambassador Leela Mani Paudyal addressed the various questions raised by the participants. On the occasion, Consul General of Nepal to Guangzhou Ravi Bhattarai made a presentation on the investment opportunities in Nepal.

DPM Mahara also attended the reception hosted by the Consulate on the occasion of the inauguration of the chancery of the Consulate. Speaking on the occasion, DPM shed light on the excellent state of bilateral relations between Nepal and China and expressed happiness over the expansion of Nepal’s diplomatic representation in China by opening the Consulate in Guangzhou. The Vice Governor of the Guangdong Province of China, Consul General of Nepal to Guangzhou and Deputy Director General of Ministry of Foreign Affairs of China also spoke on the occasion. Minister Mahara also distributed Letters of Appreciation to the Nepalis staying in Guangdong who supported in the establishment of the Consulate.

DPM Mahara was arrived in Guangzhou from Xibaipo of Heibei Province yesterday evening. Upon his arrival at the airport, he was received by the Consul General of Nepal to Guangzhou and senior officials of the Guangdong People’s Government. 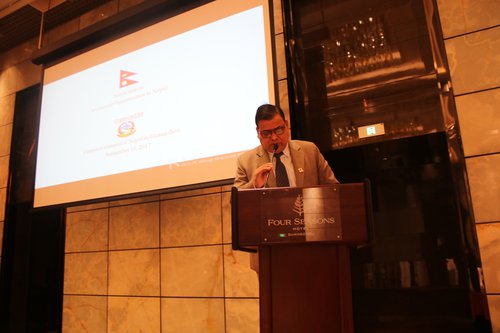 Deputy Prime Minister and Minister for Foreign Affairs Krishna Bahadur Mahara urged Chinese business community to invest in infrastructure sector in Nepal as environment conducive to investment has been created in the country.

According to national news agency RSS,DPM Mahara, who is on an official visit to China, was addressing an interaction with Chinese traders and investors organised today by Nepali Consulate General Office in Guangdong Province.

Referring to the One Belt One Road Initiative agreement signed between Nepal and China, he stressed the need for the both sides to commit to the agreement, according to Mahara’s press and public relations coordinator Hari Lamichhane.

DPM Mahara also clarified that Nepal wants to have a farsighted cooperation with China in its development work and technology.

Referring to the facilities provided by Nepal to visiting Chinese tourists, he requested Chinese nationals to visit and inspect world famous sites like the birthplace of Gautam Buddha in Nepal.

Stating that the Consulate General of Nepal is the medium for Chinese businessmen to invest in Nepal, he expressed the belief that Nepali businessmen, students and other Nepalese, living there, would be benefitted with the establishment of Consulate General as more than 1,000 Nepalis are living in Guangdong province.

Foreign Minister Mahara said that Guangdong province was becoming a hub for business, transport and education of the world.

Responding to queries of participants, Nepali Ambassador to China, Leelamani Paudyal urged to invest in tourism sector as number of Chinese tourists is increasing in Nepal.

“I Expressed Gratitude To My Friend Modiji For Support: PM Oli By NEW SPOTLIGHT ONLINE 1 day, 7 hours ago