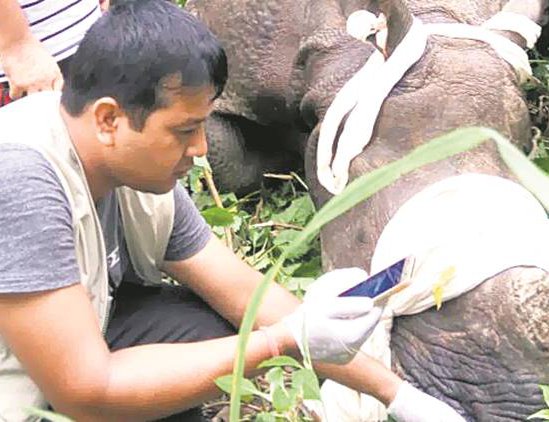 An ongoing joint operation by forest personnel from Nepal and India has rescued eight rhinos that were swept by flash floods from the Chitwan national park across the border into the Valmiki tiger reserve in Bihar. Officials said that all the animals retrieved were unharmed and have been transported back to Nepal, while efforts are on to capture another rhino still in Valmiki.However, the successful trans-boundary collaboration under challenging conditions — two people were injured in the operation — marks a lost opportunity for Valmiki, which has been struggling to establish itself as a safe ground for rhinos.

According to a news item published in Indian Express, long after they disappeared from most of the range along the Terai grasslands in the floodplains of the Indus, Ganga, and Brahmaputra, one-horned rhinos were occasionally spotted in forests of Bihar’s Champaran (now Valmiki) and adjoining Gorakhpur in UP till the 1960s, thanks to dispersal from the contiguous forests of Nepal.

In the late 1970s, studies by the International Union for Conservation of Nature’s Rhino Specialist Group and Indian experts identified UP’s Dudhwa and Valmiki among the few potential sites for rebuilding rhino populations. This led to restocking of Dudhwa with rhinos airlifted from Assam in 1984.

Though never restocked formally, Valmiki got its first chance in 2001 when a female and two males visiting from Chitwan settled down to breed. But a railway track running through the reserve claimed the female in 2006 and subsequent unnatural deaths destroyed the small resident population. Since then, rare solitary rhinos entering Valmiki have either been poached or sent to the Patna zoo.

This monsoon, the entry of the nine rhinos — the biggest such arrival in decades — could have been Valmiki’s big second chance to harbor a potentially viable resident population.

But the reserve is still struggling to secure its peripheries and the marshy patches suitable for rhinos. Opportunistic poaching remains common although tiger numbers have bounced back and threats to forest guards from Nepal’s Maoist insurgents have died down. A proposed highway through the forest has been diverted but the railway track remains. Hemmed in by cropland, the forests here also suffer from heavy grazing.

Speaking to The Indian Express, Bihar’s chief wildlife warden, Bharat Jyoti, said, “The rhinos were sent back to Chitwan for their safety. One was caught far south but others were within the protected area landscape. But Valmiki is lenticular (lens-shaped) and the fringes are not safe. A viability study of our rhino habitat in the Madanpur range is going on. For now, the question of whether we could have kept these rhinos is hypothetical since Nepal agreed to take the animals back.”

The viability study has been concluded by the Wildlife Institute of India (WII) but is yet to be released. “We found that it’s a good but small rhino habitat, part of which is in UP. Together, it can support a small population of, say, 20 rhinos. But the area has to be fenced off for safety. And the railway track has to be taken care of. Till then, rhinos are certainly better off in Chitwan,” said Dr. Bivash Pandav of WII’s Department of endangered species management.

It is not unusual for nations to bring or push back large animals that otherwise move freely across unfenced borders. India itself brought back elephants that entered Bangladesh from the north-eastern states and caused conflict in the past. But this is the first instance of retrieving rhinos that keep dispersing sporadically from Nepal to adjoining Indian forests such as Katarniaghat in UP.