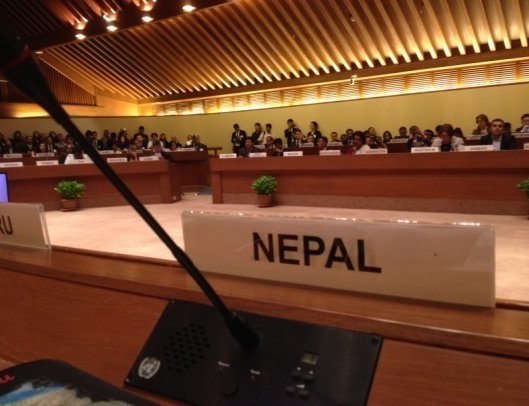 Why are DRR, Climate Change and Sustainable Development Goals so important as the agenda for Nepal and other countries? Because without addressing these issues, no country could move forward and achieve economic and sustainable growth and take it further. Nepal and other countries have realized the need for integration of these three major agenda for mainstreaming the sustainable development of the country and as the target to achieve SDGs by 2030.

Climate change and Disaster Risk Management have become huge challenges to address poverty and achieve sustainable development. According to the Ministry of Home Affairs, the total economic loss from climate induced disasters such as floods, landslides and other extreme weather events is estimated at NRS 27 billion (US$ 259 million) for the Fiscal Year (FY) 2016/2017. Nepal is one of the 20 most disaster-prone countries in the world. The data on human mortality for the period 1971-2007 shows more than 27,000 deaths, 50,000 injuries, 3,000 missing and approximately 5 million people affected. Only in the last five years, data show, there were 9000 deaths, 236 missing and 23000 injured. The recent floods and landslides of August September affected 36 districts, nearly half of the country, and displaced 22000 households and affected 103 thousand people.  More people are killed by disasters in Nepal than in any other country in South Asia. A total of 36 districts have been seriously affected by the floods and landslides triggered by the incessant monsoon rain for about two months.

Nepal is the 11th most earthquakes–prone country in the world. In April-June 2015, a 7.6-magnitude earthquake and 300 aftershocks greater than 4 magnitude were experienced by Nepal. There were 8790 deaths, with 22,300 injured, and the lives of 8 million people, almost one-thirds of the population of Nepal, had been impacted by these tremors. Out of 75 districts, 14 were declared mostly impacted and placed in the category of crisis-hit areas and 17 other districts were partially affected. The loss and damage caused by these events was estimated at 7 billion USD, according to the Post Disaster Needs Assessment Report. Now Nepal is in the process of reconstruction and rehabilitation as it recovers from these unexpected natural disasters.

Similarly, an assessment of the economic cost of climate change conducted in three major sectors including agriculture, hydroelectricity and water-induced disasters has estimated the annual economic losses to be equivalent to 1.5-2% of the GDP, which amounts to approximately US$ 270-360 million at 2013 price, while the projected losses amount to 2-3% of current GDP per year by mid-century.  The same study estimates that Nepal requires an additional investment of US$ 2.4 billion by 2030 to build resilience to climate impacts in these three sectors.

Nepal had made a lot of contribution to finalize SDGs since RIO+20 to incorporate the issues, especially the issues of mountain and LDCs, and also to reduce poverty in mountains and remove people from the state of hunger, which was the main thrust of SDGs. Nepal had prepared a report at the country level on how SDGs will be integrated and mainstreamed in planning and its effects at local level and impacts at the national level.

Nepal’s experience: NAPA and LAPA – as means for mainstreaming climate change in development

-        The recent (25th Sept 2017) DRRM bill passed by the parliament of Nepal also greatly emphasizes mainstreaming DRR in development from the central to local level planning. The role and responsibilities of each level has clearly defined avoiding duplication in the process. DRRM Authority will be established at the central level and the CEO will be appointed as an expert of this field and also backed up by five technical experts for effective policy formulation as the key elements of this bill.

-        Government of Nepal, under the current local level restructuring, is eager to develop an integrated climate change and DRR strategies at the local level to build synergy and coordination within the planning and implementation processes.

-        LAPA plan developed at the grassroots and community level has a stronger focus on DRR and sustainable development activities. These plans are mostly focused on enhancing sustainable livelihood of climate vulnerable households through transfer of knowledge and technology.

-        Nepal has successfully implemented 100 LAPA covering most of the districts in mid and far western region (14 districts). The initial outcome of LAPA has been very positive in reducing risk and building resilience of vulnerable households and communities.

-        Recently the government of Nepal has taken a resilience-based approach of addressing the core issues of disaster risk, climate risk and development deficiency targeting the under developed regions and communities below the poverty line.

-        Nepal is already in the stage of drafting the National Adaptation Plan. NAP aims to identify medium- and long-term adaptation needs and developing and implementing strategies and programmes to address those needs. It further aims to mainstream climate change adaptation in the country’s policies and plans.

Why Integrate CC, DRR, and SDGs?

-        Poverty and vulnerability are common issues and agenda facing the least developed countries like Nepal. This emphasizes on the importance of integrating climate change with development policies and plans. Without an integrated and mainstream approach, it is almost impossible to meet the national and international goals and targets on climate change and sustainable development.

-        The target beneficiaries of climate change and DRR and development are the poor, marginalized and vulnerable women and men residing in remote and fragile geographic areas.

-        Integration offers the opportunities to bring synergy among development and CC and DRR programmes, avoiding duplications and resource fatigue.

Financing for CCA, DRR and SDGs

The LDCs and developing countries have huge funding and resource gaps. Receiving external resources is not an easy task and also such funds are tied up with many terms and conditions, including high percentage of TA.  Without addressing the issues of funding, the assurance of these sectors, internal or external, will be of no impact and outcome. There are many countries including Nepal looking for funds for the successful implementation of CCA and DRR activities but now we need additional funds in order to achieve the SDGs. At the country level we are not able to say how much resources we need to implement the SDGs, or to successfully implemented all three DRR, CC, and SDGs but without external support and funding and integration of three CCA, DRR and SDGs and also successful implementation of SDGs will not be possible. To my knowledge and information, NPC-Nepal is working to find out how much additional resources we need by 2030 to achieve the SDGs. International climate finance and other bilateral and multinational organizations can play a huge role in addressing this financial gap.

-        Despite various efforts, climate change and disaster management have yet to be mainstreamed as the knowledge in the development process. There are still challenges in terms of translating policies and plans into action. It is important for the government to devise strategy and action plans to see how climate change and DRR are well integrated into the development agenda of provinces and local governments. There is still uncertainty in terms of how the local structures will function and how the local governments can integrate the various agenda within their priority and plans.

-        Lack of institutions, policies and system to implement CC and DRR is a challenge.

-        Lack of awareness among people, regarding CC and DRR, lack of comprehensive policy on disaster risk reduction and management and climate change is challenging to overcome.

-        Similarly challenge is there in securing technology and financing for climate change, particularly covering loss and damage and meeting the cost of adaptation

-        Others include lack of strategic planning for prevention and preparedness, socio-cultural challenges, culture of submission to divinity, and use of natural resources, settlement behavior are some of the other challenges.

-        There is a huge gap in the role of private and public sectors in the context of DRR and CC. There is the need to increase engagement with private sector stakeholders including banks, finance companies, businessman and insurance companies, etc.

-        There is also a need for capacity building, knowledge and information sharing and regional dialogue and networks for strengthening the country’s willingness to mainstream climate change, DRR with sustainable development agenda.

What we need to do in Nepal

-Mainstreaming DRR and CC from policy to local level plans and programmes.

- Mobilizing sufficient resources (external and internal) and allocate them from central to local level to address DRR-CC issues at the ground level.

-Ensure and assure travelers/tourists to promote tourism in the country so that they could be safe and will be rescued at the time of extreme events of DRR.

-Ensure investors/businessmen of security to their investment from impact of DRR and CC.

-Ensure people are safe where they are, or if they are not, give them alternatives as to where they have to move.

WVIN Working For Change By A Correspondent 2 days, 13 hours ago

A Search For Genderless Talent By Susmita Aryal 2 weeks, 3 days ago

Women In Leadership By Aagya Pokharel 1 month ago

IUDP A Game Changer By Keshab Poudel 5 months ago

WORLD VISION INTERNATIOAL 15 Years Of Partnership By A Correspondent 6 months, 3 weeks ago