India And China Do Not Share Information of Flood With Nepal: Dr. Sharma

India And China Do Not Share Information of Flood With Nepal: Dr. Sharma 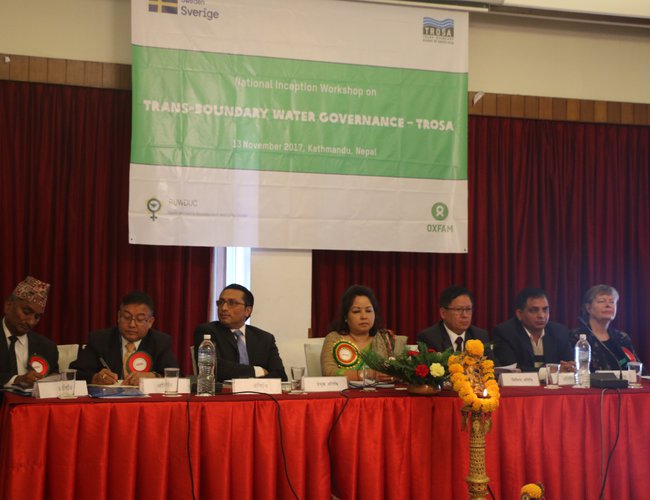 Director General of Department of Hydrology and Meteorology Dr. Rishi Ram Sharma said that Nepal’s early warning system saved the life of hundreds of life in India during the last floods in the Bihar and Uttar Pradesh.

Addressing the launching program National Inception Workshop for Trans-boundary Rivers of South Asia, Director General Dr. Sharma said exchange of information is key to save the human life during the floods. “As an upper riparian country, Nepal shares flood information with India and Bangladesh.” said Sharma. “This is not same with us. India and China don’t share such information with us. “

Jointly implemented by OXFAM and its partners to understand and address the challenges and working to create the condition to reduce poverty in river basin communities in Ganges and Brahmaputra Meghna (GBM) and the Salween basis, Dr. Wagle highlighted the Mahakali Integrated project in the context of sharing of benefits of Trans Boundary Rivers.

“This program is going to most significant and important in the context of implementation of local level and provincial system in Nepal,” said Dinesh Thapaliya, secretary at Ministry of Local Development and Federal Affairs. “Ministry Hope that this program will enhance the governance capability of province and local level.”

Secretary at Water and Energy Commission Secretariat Madhshudhan Adhikari expressed the hope that this program will address the problems faced by the people living in the region. “As WECS is preparing the National Water Strategy in the changing context of federal set up, this program will contribute us to understand the community model.

OXFAM country director of Oxfam Nepal Cecilia Keizer said that the Nepal component of the program will be launched in the Mahakali River basin with our local partners with inclusive water governance.

Rina Pradhan from ICIMOD presented importance of community based flood early warning system in the country like Nepal.

107 Days Remains To Hold The Elections: CEC Thapaliya By Agencies 1 week ago

Ruling Parties Agree To Hold Elections On November 20 By Agencies 1 week, 1 day ago

'China Appreciates Nepal's Commitment To One China Principle By Agencies 1 week, 1 day ago