Polls Concluding in the Midst of Blasts 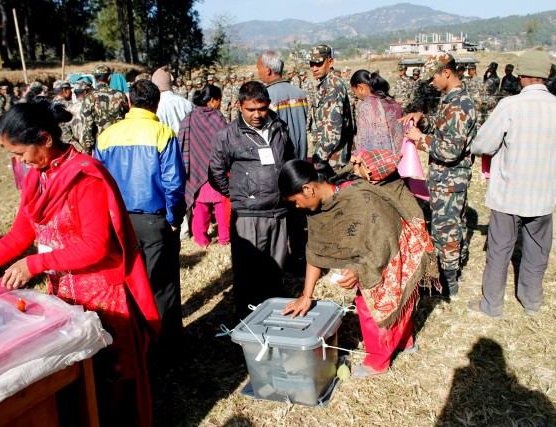 Amid confusion and fear created by sporadic incidents of violence, elections at different levels have been held under the new constitution of Nepal, which envisages a federal structure of governance under a republican system. While Prachanda made necessary arrangements for holding local level polls, Deuba, who succeeded Prachanda as head of the government, is overseeing completion of the polls at the local, provincial and parliamentary levels. Although attacks on candidates and election rallies continued unchecked prompting security concerns in the run-up to the elections, the first phase of elections scheduled for November 26 in 32 districts was held successfully with 65 percent voter turnout. After a series of deadly blasts during the first phase of parliamentary and provincial assembly polls, fears of polls-related violence have increased again due to a resurgence of anti-poll activities with blasts and attacks in various districts.

On November 28 alone, three election rallies were marred by the setting off of improvised explosive devices (IEDs).At least 8 people were injured in Tulsipur-5 of Dang district when an IED was hurled by two men on a motorcycle some 500 meters from an election rally being addressed by Deuba. A temporary cop injured in the blast in Tulsipur died the following day, becoming the first casualty of election-related violence. Seven people including an NC candidate for the federal parliament from Udayapur constituency-2, were injured when an explosive device exploded at Dunuwarbeshi of the district on November 29.Likewise, four persons were injured when an explosive went off at a rally of NC at Bhaladmi tol in Itahari on November 30.Initially, the violent attacks took place targeting the left alliance in various districts, which prompted UML leadership to come down heavily on the government for its failure to provide security to poll candidates. The left alliance went to the extent of accusing the government of inciting the Netra Bikram Chand-led CPN Maoist to foil the upcoming parliamentary and provincial polls. In recent days, however, NC leaders and rallies are targeted more often.NC senior leader R S Mahat had a close save when an IED targeting him in Nuwakot exploded seconds after his vehicle had moved past.similarily, NC senior leader R C Poudel was targeted in Tanahu where the blast injured one of his security guards and damaged his vehicle. Incidents of blasts were also reported in Rauthat, Bhojpur, Okhaldhunga, Lamjung, Morang, and Lalitpur among other districts.

In Rauthat, the detonated explosives injured nine persons. A report by the National Human Rights Commission shows 107 cases of blasts across the country since November 15.In these incidents of blasts over a period of two weeks, one person has been killed and 38 have been injured. It is quite a coincidence that hours after a meeting of the High-Level Election Security concluded that there are security threats for the second phase of provincial and federal parliamentary polls, an explosive device went off in the heart of the city, which left the people panic-stricken.Following that, about 8 people including NC leader Gagan Thapa, were injured in an explosion while campaigning in BudhanilkanthIt area. It is ironical, however, that even after repeated attacks on senior leaders of different parties, the government has not been able to do much except to apprehend some activists of the Chand-led party, which is widely believed to be involved in these activities C.K. Rawat, a separatist, is also reported to have been encouraging these activities. However, neither the government nor the concerned have officially confirmed their involvement in these violent activities. The ongoing violence may discourage voters a bit from showing up at a polling booth for the second phase but is not likely to adversely affect the turnout in a significant way. Leaders of major parties are on the run trying their best to convince voters to turn up in large numbers and vote for their parties, in many instances ignoring the election code of conduct in force since long.The Election Commission (EC) is seen flip-flopping on a poll code to favor heavyweights belonging to resourceful parties. One glaring example in this context is the EC’s permission to use helicopter by some high profile leaders, despite an initial announcement by the poll body barring political parties and election candidates from using it.With this new arrangement, top leaders are spending millions on helicopter flights every day to the frustration of less resourceful lower-rung election candidates. Some leaders are using helicopters from early morning till late in the evening.

While Oli and Prachanda have been using private helicopters, Deuba has been using the army chopper to attend at least four election-related functions in a day in different parts of the country. Irrespective of the source of expenditure, it is very clear that the money spent on helicopters easily exceeds within a couple of days the limit (Rs.2.5 million) fixed for a candidate contesting the parliamentary election under the first-past-the-post system. Interestingly, EC Chief Yadav has no hesitation in admitting that the Commission has been compelled to compromise under pressure from politicians. The current dispensation has also made several decisions to distribute relief to the long-ignored flood victims and the ones affected by the devastating earthquake. Further, public holidays are declared on religious and communal grounds to celebrate the birth anniversary of persons never heard of in the past and to celebrate occasions\festivals not much known in the country. Since no major political parties dare object to these opportunistic decisions of the government, the EC conveniently refrains from intervening in these acts which are clearly against the election code of conduct. Despite these unpalatable decisions of the government and numerous incidents of explosions all over the country, it is now almost certain that the last phase of elections will be held as scheduled with the satisfactory turn out of voters on December 7.

Despite tall claims of the two parties (left alliance aspiring to get a two-thirds majority and NC hoping to get a majority in the next parliament), the general thinking is that the Deuba-led party is trying its best to stop the left alliance from getting a majority so that NC’s chance of leading a coalition government, including Madhesh-based parties, could increase. NC may, however, note that in the event of these parties getting elected a sizeable number to the parliament, they will have somebody ready from their side to lead the coalition government, which is not liked by people of Nepal because they are highly unstable and lots of uncalled for compromises are made to protect the interest of parties and persons in power. No matter which party or alliance leads the next government, people want political stability so that proper attention could be given to the burning problems of our economy.

Nepal is importing Rs. 2 billion worth of rice every month from countries like India, China, Bangladesh, and Thailand. India by far is the major exporter of rice to Nepal. A trade deficit is on the rise and is not likely to be corrected in the foreseeable future. Remittance, the lifeline of Nepal’s economy, is increasing at a decreasing rate. For example, in the 3 months of last fiscal year it had increased by 3.2 percent while in the corresponding period of this fiscal year, it registered an increase of 2.6 percent only. Despite some increase in capital expenditure in the 3 months of this fiscal year, the government has Rs.246 billion lying idle with Nepal Rastra Bank. The government has also missed the revenue collection target by Rs.3.88 billion, which is being attributed to the weak collection in value-added tax. The underperformance in VAT alone stood at Rs. 1.81 billion, explaining around 47 percent of the total shortfall in 3 months. Revenue shortfalls can be handled easily but the most worrying factor is the ever deteriorating trade balance. In order to correct this trade gap, the new government to be formed after the election will have to concentrate on increasing production of different items at home in a phased manner, concentrating first on increasing production of rice, vegetables, meat, eggs, fish, fruits, etc and then think about non-farm items that would be cheaper to produce at home then importing it from outside. Those at the helm of affairs should engage themselves in trade negotiation with leaders of other countries such as India and China which have been enjoying the huge trade surplus with Nepal since long.It may be noted that both India and the United States suffer huge trade deficit with China and chief executives of these countries have approached President Xi of China to initiate moves to correct this imbalance.

President Trump during his visit to China in mid-November raised the issue of trade gap amounting to 300 billion dollars. A commercial deal of 250 billion dollars was struck and Mr. Trump also succeeded in making necessary arrangements to sell US products worth 300 billion dollars to Chinese firms. As far as trade imbalance is concerned, Trump was not hard on Chinese government this time around because he had the important task of achieving Chinese cooperation in controlling the missile-firing North Korea. He is reported to have succeeded in extracting Chinese concession\cooperation on both fronts. Let us also not forget that when mismanaged even resourceful countries like Venezuela fall into economic crisis. It may be mentioned that people of this oil-rich country are hard hit by the intolerable level of inflation, which has increased by 4115 percent in a year. This year alone, Bolivia, their currency, has depreciated by 96 percent and the country owes 141 billion dollars in debt to countries like China and Russia. Observers claim that the Venezuelan economy has reached a stage of death. Now it is entirely up to us whether to satisfy ourselves thinking there are economies in the world which are in a greater mess than what we are in today or make concrete efforts to arrest the deterioration in the economy and change it for better in days ahead, making use of the natural resources that abound in this country.

Like in other countries, it is a time that both common people and leaders thought about our serious problems. After the decision to take an exit from EU, England has slipped down a level to become the sixth largest economy in the world and France has taken over the fifth position. While people in Britain are concerned about the slip in position, the French would not like to slip down from the position obtained for the first time after 2013. Let us also note that by 2030 Chinese economy will swell to 38 trillion dollars from its current level of 19.4 trillion dollars to become the largest economy in the world, while Indian economy (currently 2.4 trillion dollars) will hit 19 trillion dollars to be at number 3. With dedicated leadership genuinely interested in the well-being of their people in both countries, these estimates look realistic and achievable. Let us hope a little bit of prosperity achieved in our neighborhood is transferred to us also.