We in Nepal lie back and lazily presume it’s all happening somewhere else. Yet, as we have moved closer and closer to the 7th of December we have experienced the discovery of more IEDs and heard more explosions 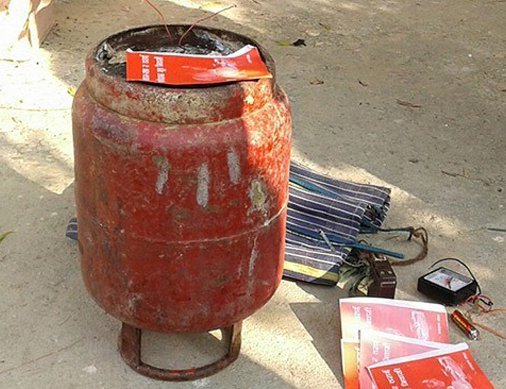 I have pondered, as I’m sure have others over this current year, what the world would have been like if such as Plato had tweeted the wisdom of Socrates out of a mobile phone instead of having to write it down and argue out the tautology. As it is the current famous tweeter probably doesn’t know what tautology is-or does he? I, myself, don’t tweet and so haven’t a clue what kind of skills one needs to do so.

At first it seemed to be an attempt to discipline the world into communicating in a kind of prose haiku, with a limited number of words, not necessarily poetic. Having read a few, however, I revised this conclusion to one that settled on tweeting as a form of communication for the verbally challenged since most of the tweets I did read didn’t seem to have a focus and rather than being ‘lost for words’ were ‘lost in words’.

Now the infamous Potus has turned his tweets temporarily away from the President of North Korea, having sought to offend him by calling him ‘little rocket man’, which frankly is probably as offensive as water off a duck’s back, and focused on the British P.M., Theresa May, who had the ‘audacity’ to proverbially slap his fingers for retweeting an offensive twitter from a nasty British far right group ,which by the way called Potus its ‘champion’ and so on and so forth.

Frankly a slap on the fingers was mild and had anyone been close enough a hefty kick on the Presidential butt would have done nicely.

What is it about this man and his ongoing saga of relatives and cronies with fingers in some dubious pie or other that is irksome? It’s hard to put a finger on any one thing but it’s there somewhere, the ‘tiresome Trump’ factor lurking around waiting to be revealed.

Amongst the things he does not revere are the sacred lands of the first nations of the United States. If there are any minerals to be had, any last exhausted bit of coalface, he’ll have it hauled out, and no matter if it destroys a sacred burial ground of Neolithic origin-again it’s a question of understanding. It must be extremely frustrating for the scholars of the U.S. I mean to explain why one should revere the relics of not only one’s own ancestors but those of others. The importance of the vast, joint patrimony of humanity must be completely lost on the present Potus who has spent an inordinate number of words and hours deliberately trying to offend a foreign leader who is labouring with the angst of being relegated to the back of the queue when he feels his people could well  stride ahead.

In actual fact ever since my student days when the Campaign for Nuclear Disarmament and the Peace Pledge Union thrived under the guidance of Sir Bertrand Russell, I, and several others of my generation I might add, have never been able to understand why, if nuclear bombs are so dangerous they can wipe out the whole human race, they shouldn’t be wiped off the face of the earth entirely. It doesn’t make sense!

What is there about Potus and the people who voted for him that makes him more trustworthy than anyone else with a nuclear bomb?

Frankly, I wouldn’t trust any human being with any bomb! I can look around the world right now, switch on the News and see or hear so many disasters waiting to happen. Why help them on their way?

We in Nepal lie back and lazily presume it’s all happening somewhere else. Yet, as we have moved closer and closer to the 7th of December we have experienced the discovery of more IEDs and heard more explosions. This ‘relatively peaceful’ election has already cost someone his legs. “Only one person” you might say, but, for that person, it’s one too many!

We are all brave when it’s happening to someone else! Potus is so brave sitting at the end of his mobile with ever-ready fingers to insult ‘little rocket man’ or Theresa May by implying he knows more about what’s going on in her country than she does. He hopes we’re laughing with him but we’re not!

We’re wishing he still had a parent who could lock away his mobile phone before he does any more damage. Here is a man who has never been in an army, navy or air force, has no experience of combat apart from wars about trivia based on poor tautology and who is Commander-in-Chief of the most powerful army (if not the largest) in the world.

Of course the most frightening aspect of all this is that if people truly do get the leaders they deserve and Potus is what the American people (or a little over 50% of them) deserve then America is no longer what we dreamed, no longer the promised land waiting to welcome all races and colours in their quest for freedom.

I am still waiting for something to happen, something that will show us that this is not so and the tables will turn on this cruel trick and we’ll be back to what we knew, to the status quo ante! Let’s pray that God will once more Bless America!