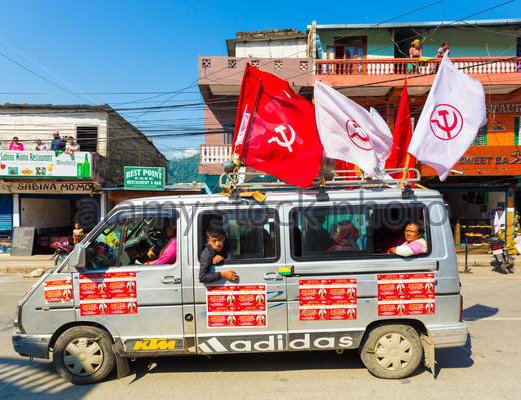 As Nepal continues counting the vote of national elections and Communist alliance is securing thumping majority in provincial and national government, Indian media are worrying about the policy of Nepal’s coming government which harp so much anti-India rhetoric during the elections campaign.

He writes the government has been busy flogging Pakistan this election season but it's Nepal which has thrown up one of the biggest challenges for India's neighborhood policy in recent times. After the communists stormed to power in Nepal, India's bugbear K P Sharma Oli, who makes no secret of his fondness for Beijing, is all set to take over as prime minister as the senior partner in the Left coalition.

“For India, which is already faced with increasing Chinese presence in the region, the challenge would be to ensure that Nepal under Oli doesn't turn into what Sri Lanka was under its former president Mahinda Rajapaksa. Or the Maldives which recently signed an FTA with China with revealing the details of the agreement. As Chellaney says, after the erosion of its clout in the Maldives, India is confronting a similar retreat of influence in Nepal, a country symbiotically tied to India and with which India even has an open border. And unlike the last time, when he was heading a rickety coalition, Oli will be here to stay this time as the new Constitution precludes the introduction of a no-confidence motion against the prime minister for at least 2 years,” writes Parashar.

The author writes Oli, after he was forced to resign last year, had accused India of effecting a government change by forcing Maoists to withdraw support from his government through a "remote control".

“China in fact pulled off a coup ahead of the elections which, as the UN has said, were intended to complete the country's transition to democracy under the 2015 Constitution by uniting the splintering communist opposition, bringing together CPN-UML chief Oli and CPN (Maoist Centre) leader PK Dahal Prachanda. As strategic affairs expert Brahma Chellaney says, a communist government in Nepal will be beholden to Beijing,” writes Parashar.

"In his earlier stint as PM, Oli stoked tensions with the plains people (Madhesis) and with India. Dubbed "Oily Oli" by his critics, Oli scapegoated India for Nepal's political and constitutional crisis. His return to power will be bad news for India," says Chellaney.

Former foreign secretary Kanwal Sibal says Oli has to be careful as China, which is said to have worked behind the scenes to bring the Communists together, would want to extract a price after the election outcome. "China's influence in Nepal is well known and one hopes that after he assumes charge, he will behave with maturity and not cause fresh headache for India," says Sibal.

The pro-India Nepali Congress has suffered a humiliating defeat, the kind of which it has never seen before. It was under Oli early last year that Nepal signed a trade and transit agreement with China seeking to reduce its dependence on India. At an election rally last month, Oli said that the era of economic blockade was over for Nepal with the signing of that agreement when he visited China in 2016.

Oli was referring to the economic blockade allegedly imposed by India in late 2015 after the freshly promulgated Constitution which was seen as discriminatory by the Madhesis. Nepal faced severe shortage of fuel and other commodities which led Oli, who was then PM, to say that imposing a blockade to a landlocked nation was a breach of international treaties, norms and values.

In another story Indian online Scroll.com writes A communist win in the Nepal elections is bad news for India (but great for China).

According to Scroll, the final results of Nepal’s first parliamentary elections held since 1999 are expected some time in mid-December. But on Saturday, the country’s election commission announced that a coalition of the Communist Party of Nepal-Unified Marxist Leninist and the Communist Party of Nepal-Maoist Centre had won more than three-fourths of the seats in the federal assembly. This is not good news for India, which has long exerted an influence on the mountain-country’s politics and economy. The Left coalition, which will now take office, is likely to lean far more towards China than the incumbent Nepali Congress, the grand old party of Nepali politics.

In 2006, with the end of the Nepalese civil war between the government and Maoists opposed to the constitutional monarchy, India took a commanding role in events in the Himalayan state. In 2015, it was first off the block in helping Nepal recover from a devastating earthquake that left close to 9,000 people dead. A year before that, Prime Minister Narendra Modi had made a much-publicised trip to Nepal.

But the India-Nepal relationship hit a hurdle in September 2015 when Kathmandu announced a new Constitution that gave less than adequate powers to ethnic groups such as the Madhesis in the country’s Terai region. The Madhesis speak Maithili, Bajika and Bhojpuri and share close ties with Matihili, Bajika and Bhojpuri groups across the border in the Indian states of Uttar Pradesh and Bihar.

In response, a Madhesi border blockade stopped all essential supplies from India from reaching the hills of Nepal – a pressure tactic reportedly supported by New Delhi. The five-month blockade had a devastating effect on Nepal, which depends on India for almost all of its supplies. The country experienced severe shortages of petrol, medicines and even food.

Angered by India’s big brother stance, Nepal looked to China to balance New Delhi’s immense power over Kathmandu. In 2016, Prime Minister KP Sharma Oli travelled to China and signed a transit agreement. This would give Nepal access to Chinese ports and connect the countries by rail. The two sides also discussed the possibility of China selling petroleum to Nepal – which, if achieved, would greatly reduce New Delhi’s leverage over Kathmandu.

This year, Nepal signed on to Beijing’s One Belt, One Road plan – an ambitious project to connect the Eurasian landmass with China at its engine. The agreement would further cement Nepal-China communication links. In August, Chinese Vice-Premier Wang Yang visited Nepal, making sure to visit leaders from the Communist Party of Nepal-Unified Marxist Leninist and the Communist Party of Nepal-Maoist Centre. China even played up its Buddhist links with Nepal, countering New Delhi’s Hindu card.

Oli’s use of the China card worked. The Modi government stepped back from its support of the Madhesis, encouraging them instead to take part in the elections.

The Madhesis’ participation in the polls is a big boost for Nepal. The country saw years of civil war and turmoil that ended just a little over a decade ago. Its new republican Constitution moves Nepal away from a unitary system to a federal state – even if the minorities in the Terai still feel short-changed in the new system. In a throwback to India’s own tumultuous decade of state formation in the 1940s, the largest Madhesi party, the Rastriya Janata Party, has called Nepal a multi-nation polity in its elections manifesto, inviting charges of separatism from Nepal’s hill elite.

The Left’s big win would in all probability mean that KP Oli will become prime minister. This is bad news for India. Oli had reached out to China in 2016. The 2017 campaign also saw Oli call for Chinese investment in Nepal. In November, the ruling Nepali Congress scrapped a major Chinese hydropower project that the Communist alliance has promised to bring back if it comes to power.

The sudden uptick in China’s fortunes in Nepal mirrors Maldives, where China-backed Abdulla Yameen Abdul Gayoom had defeated the candidate supported by India in the 2013 presidential elections, sharply reducing New Delhi’s influence in the country.

According to Scroll.com China has also developed close links with Sri Lanka, which has joined the One Belt, One Road plan. Another close Indian ally, Bangladesh, has signed on to the project as well. In response to India’s $2-billion credit line to Bangladesh, China offered it $24 billion in credit in 2016, making it the country’s biggest foreign credit line. China also sold Dhaka its first two submarines in 2017.

India and China are seeing a contest even in Bhutan, which is currently practically under Indian military protection and does not have formal diplomatic relations with China.

In another blog of Times of India, the online hopeful that the government cannot cross the limit. However, a lot will depend on the two main leaders in the leftist coalition – UML’s KP Oli and Maoists’ Prachanda. Their alliance is perceived to be pro-China and the new government could fast track Chinese infrastructure projects in Nepal – the latter has already joined Beijing’s Belt and Road initiative. But the new dispensation in Kathmandu should know that Beijing drives a hard bargain and could really burden Nepali finances – something that is already being witnessed in Pakistan. Besides, playing the China card to offset India has its limitations. After all, Nepal has geographical contiguity and deep cultural ties with India. The two countries share an open border with Nepalis free to work and live in India – things China can never match.

“However, New Delhi must work hard to correct a perception in Kathmandu – focussing on the Madhesi blockade and other incidents – that India tends to take Nepal for granted. Prime Minister Narendra Modi has, in general, done a successful reboot of Indian foreign policy that has raised India’s profile abroad. But Nepal stands out as a black spot. To turn the situation around, Modi must reach out to his Nepali counterpart and make a fresh beginning in ties with Kathmandu,” writes author in blog.

Indian writer Seema Guha in her article writes, while China's cheque-book diplomacy is a potent tool, geography also plays an important role. The China-Nepal border is a difficult mountainous terrain. Even the petroleum agreement signed with China during Oli's previous term in office would not be easy to work out. Poor connectivity and high costs of transportation through the rough Himalayan terrain would increase costs exponentially. As with petroleum products all other imports from China will have to come through the Himalayan gorges. But no Nepalese leader is in a position to turn its back on India.

She draw the conclusion that so Kathmandu will do the balancing act between the two Asian powers. It is also a fact that the Nepalese have much more in common with India than with China. But India cannot afford to be complacent over this. The question that arises is where India has gone wrong. It is not enough to oppose an idea without putting an alternative deal on the table. If Delhi is opposed to Xi Jinping's OROB and maritime silk route, it has to offer an equally attractive alternative.

Sri Lanka had offered the Hambantota project initially to India. But Indian companies had refused come on board. India's big brother attitude needs to change

FAO’s Asia And the Pacific Nations To Hold Regional Conference In Virtual Mode In September By NEW SPOTLIGHT ONLINE 15 hours, 11 minutes ago