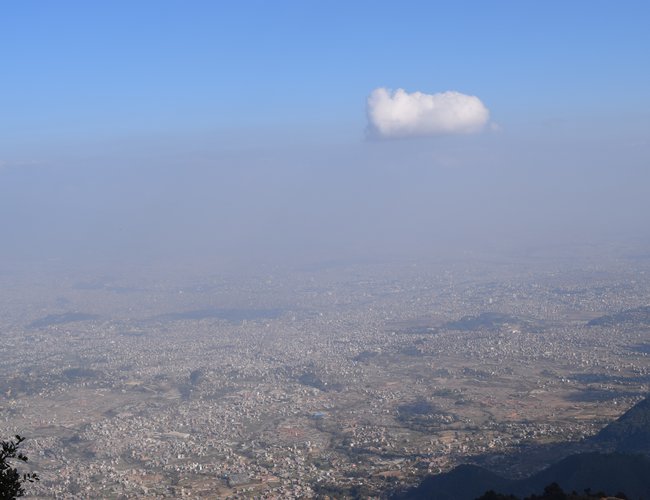 This excellent historic, cultural and religious tourist city is suffering from deteriorating air quality, unplanned infrastructure and housing growth, environmental risks, water contamination, lack of enforcement of stricter regulations, growth limitations of drinking water and shortage of energy. Above all, growing smog has covered its atmosphere and vehicle congestions has jam-packed the entire roads of the city.

Being only one mega city, it is attracting not only the people from other districts to settle here in search of better future, but also a huge crowd are continuously entering from bordering neighbor nation. There are better opportunities in Kathmandu compared to other parts of the country and it has also been paradise for the people who have a strong will and are prepared for hard labor. It is usual for the general populace to enter here in search of employment and a better life. Population pressure is increasing fast and facilities and infrastructures are in very primitive and mismanaged here.

Although the constitution provides its all citizen the right to live in a clean and healthy environment, people have not been able to enjoy the right. The government itself has been violating the constitution by producing dust and pollution in the environment who is responsible for protecting rights of citizens.

Article 30 of the constitution has guaranteed the right to clean environment while clause (1) states that every citizen shall have the right to live in a clean and healthy environment, clause (2) explains that the victim shall have the right to obtain compensation, in accordance with the law for any injury caused from environmental pollution or degradation and clause (3) says that this article shall not be deemed to prevent the making of necessary legal provisions for a proper balance between the environment and development, in development works of the nation.

Studies have shown that children, elderly and people with lung and heart diseases are more vulnerable to the health effects of air pollution. The yearly total cost of the health impacts of PM10 in Kathmandu is estimated approximately a billion rupees.

Moreover, the garbage here is left to rot emitting stink and posing a health hazards to the city dwellers. Piled up garbage in roads all around are spreading foul smells, spreading communicable diseases and tarnishing the beauty and image of the culturally and traditionally rich city.

The government, the political parties and the metropolitan city council are fully aware of this reprehensible condition; who are blamed for their inability to resolve and manage these disorders.

There are so many plans and programs going on and under pipelines to make it livable but instead of being better things are becoming worse.

Nepal has lower capabilities and lack of enough resources to construct mega projects, politicians and the planners speak only languages of some donors and INGOs without knowing ability of state.

The current roads expansion in Kathmandu cannot solve the problem to reduce vehicle congestion, without completely over howling total urban transportation and infrastructure system. The construction of second ring road project is moving at snail’s speed, it could be a long-term support, but for the immediate support, it has nothing to do. The existing ring road expansion is consuming a long time to complete it. The time consuming in the underground installations of drinking water project have suffocated the lives of the people in the valley. The road inundation during the rainy season have hit hard for the commuters and vehicles plying in the valley.

It is high time that we all should join our hands in making Kathmandu a clean, green and vibrant city in the South Asia. Kathmandu needs immediate, efficient, economy small and medium projects managed by itself to overcome current mismanagement.

The government and the metropolitan city should initiate the work in faster manner. Such as scientific garbage management should be done mutually through public private initiatives as this job is not possible only solely by the government agencies. More garbage disposal sites should be developed. Metropolitan city office and its ward offices should be equipped with modern machinery, manpower and vehicle to keep clean and green the city. Because garbage management especially its disposal has been the greatest city problem after vehicle congestions.

Vehicle movement should be restricted in all touristic and historical areas alike in Thamel. Movement of motorcycle inside ring road should be also decrease through a planned and on phase-wise because immediate restriction seems to be impossible. Government should take lead role in conducting comfortable city buses in considerable numbers as part of social service to general people instead of profit making. Traffic lights should be installed in major intersections of city roads. Annual quota should be fixed for new vehicle registration as china has done in the city of Beijing. Vehicles older than twenty years should be immediately phased out and be scrapped. Traffic police should be also equipped with modern equipment and transports.

Electric vehicles, in massive scale can play a very important role in reducing emission loads in Kathmandu. Operating the electric bus system could save approximately 3 tons of potentially carcinogenic particles from being released into Kathmandu’s air every year.

The government’s functions are very scattered and planning and implementing agencies are so many in the city and there is no central command in city planning and implementation; a powerful organization with full authority to direct and coordinate all the agencies is needed to be formed. The government must have its own public construction company or a department to function like the private contractor to construct city roads, important infrastructures and maintain it, which needed to be immediately done as private contractors are also causing long delay in infrastructure constructions especially the road construction and its maintenances.

The deteriorating and declining metropolitan image of Kathmandu city may also be damaging the Shangri La character of other parts of Nepal. To save Kathmandu valley, to preserve its cultural, religious, historical and natural heritage and to develop it as an international tourist destination instead of economic center, it must be well managed, cleaned and pollution free. People should get the clean air to survive, it is also an issue of peoples’ right.

According to WHO - the enjoyment of the highest attainable standard of health is one of the fundamental rights of every human being.

Here’s How Governments Can Reduce The Impacts Of Asia’s Devastating Flash Floods By Rabindra P. Osti 5 days, 4 hours ago

Make In Nepal By Hemang Dixit 6 days, 13 hours ago