This new parliament need not slink in shame with such questions, more so since the winning coalition led by KP Oli has managed this feat less on Left ideology and more on raw nationalism, surpassing the traditional nationalists such as the re-incarnated RPP of the erstwhile Panchas 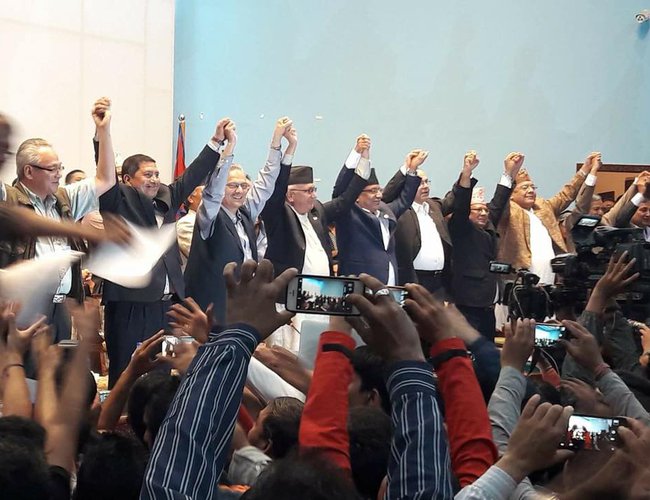 The election fever has come down but the body politic is still unwell, and its chronic disease still not properly acknowledged, let alone administered the proper cure.  Expecting the technicalities of elections to solve underlying structural contradictions is no different than confusing a successful job applicant with the completion of the job itself.  The task of “institutionalizing Loktantra” while sorting out all its incongruities has not even begun: only the job applicant(s) have been selected.

To use Friedrich Nietzsche’s words, what has happened with the recent elections, and the success of the Left alliance between EhMaLay and Cash Maoists is

“… that every specific body strives to become master over all space and to extend its force (its will to power) and to thrust back all that resists its extension. But it continually encounters similar efforts on the part of other bodies and ends by coming to an agreement (“union”) with those of them that are sufficiently related to it: thus they then conspire together for power. And the process goes on…”

They conspired during Dussain holidays and came together to acquire electoral power, and they have succeeded, perhaps even beyond their own dreams. One must credit them for being extremely “street smart” on this count: it now remains to be seen if they have the much more demanding statesmanship to craft a new order acceptable to all. And the signs on this front are not very promising.  But first, let us discuss the good things that the recent elections have brought out.

The good news is that the political illegitimacy of the Loktantricksters has been ameliorated to a great extent: the self-extending CA1 and the automatically metamorphosed-into-a-parliament CA2 were seen as self-serving distortion of the popular mandate by a cabal of party oligarchs mostly beholden to external masters. This new parliament need not slink in shame with such questions, more so since the winning coalition led by KP Oli has managed this feat less on Left ideology and more on raw nationalism, surpassing the traditional nationalists such as the re-incarnated RPP of the erstwhile Panchas.  Ideology too seems to have mattered at least to the party cadres, sufficient enough to galvanize them into collective voter mobilization: the idea of “Left unity” seems to have brought forth their sense of volunteerism that was missing in the other “democratic” coalition.  Local bodies have also been elected after a failure to do so for a decade and a half.  While the old Westminster model has been brought back without ironing out its contradictions, the saving grace is a “clumsy solution” model tempering the autocratic ambitions of those directly elected, albeit with less than fifty percent of the votes thus representing a minority of their constituency, with proportional representation that more realistically represents the popular votes. It has brought back some degree of separation of powers and ameliorated fears of the imposition of a “dictatorship of the politburo”.

The bad news, of which there are many, starts with the lack of statesmanship seen in the hasty constitution-making process. This crop of leaders had ten years to think through this – and they were well paid to do that by both the Nepali tax-payers and the donors that loved them so dearly – and they were unable to even figure out the first steps after the elections. Yes, it is their failure to figure out how to elect a National Assembly, and the ripple effect of that in announcing the winners of the proportional election category and thus forming a new government, which has cast a shadow on the wisdom and capacity of the current big party leadership to bring closure to the political uncertainties and stability to the country. And this is just the beginning.

It is not at all clear what the federal provinces are going to be like, what they are supposed to do, even where they are to be located or housed.  Passions are already running very high, and improperly handled, they have the potential to tear parties – and the country’s governance – apart.  The sad fact is that this provincial body stands in the way – and against the interests – of  both the national party leadership as well as the local leadership of village and municipalities. The former wish to reach out directly to the local level and their primary voters: the latter want to be able to access national level decision-making by themselves. The provincial government comes in between both these interests.  If only the framer of the constitution had studied Nepali history and understood why, in the days of the Panchayat, the Anchal (Zonal) Panchayat was done away with as an unnecessary body that today survives only in license plates and football clubs, they might have saved themselves and the rest of the country much unnecessary headaches.

There is confusion even with the village and municipal governments elected half a year ago: they are still essentially functionless, with confusion of mandates, tasks, staffing, taxing prerogatives and many more.  And given that they cannot be removed for five full years, there is a degree of arrogance that some of them are exhibiting which, tied to their need to recoup their massive investments in getting themselves elected, have all the hallmarks of a spike in public corruption.  The Kathmandu mayor’s arrogant remark, commented on editorially by some of the national broadsheets, is a harbinger of heartaches and frustrations that Nepali voters will experience in the years ahead as they fail to see their local elected officials acting responsibly or delivering good services.

One would expect the democratic process to take care of these problems provided there remains a degree of political stability. However, there are serious reasons to wonder about that. There are already contradictory statements emerging that are worrisome on this front. One of the main architects of the Left Unity who lost the elections (Bam Dev Gautam) has confessed that the agreement between Oli and Prachanda was that they would divide the prime ministerial tenure half-half.  If so, this is a recipe for more musical-chair governments, and changing alliances, in the future and not at all the “five years of stability” hoped for by the voters.  Then there was the pre-election promise of party unification between EhMaLays and the Cash Maoists but statements emerging from some of their top leadership points to big disagreements ahead even if this is pursued without many shenanigans.  Add to this how the Kangress and other parties of the Right are smarting with their unexpectedly poor electoral performance, how the more political of their leadership lost elections, and how those coming into the parliament from the proportional system are hardly political leaders and more either moneyed donors or lackeys of party oligarchs and we have the recipe for a perfect political storm up ahead.

Compounding all of these problems of Nepali making is the additional dark cloud: the overbearing Southern neighbour is (rightly) seeing the elections as a defeat of its Nepal policy through muscular diplomacy and arm-twisting micro-management and (wrongly) as a victory for the Northern neighbour.  It may not impose another blockade right away, but strong powers do not like big defeats in small places and thus we can expect unpleasant reactions emanating from down South which the Nepali leadership on the horizon does not inspire much faith in being able to counter.  Such Southern moves will also elicit Northern counter reactions, and thus Nepali voters might not be fortunate to see the stability they so fervently desire.