The (Poor) State of the Economy – Re-Visited

The industrial sector had also been considered likely to grow strongly, given the more reliable supply of power and energy provided by the NEA and the grid since 2016. But the initial effect of the improved flow of power and energy was felt in 2016-17, and the delay in the completion of the 456 MW Upper Tamakoshi project, mean that the industrial sector is now unlikely to improve on last year’s performance and exceed last year’s achievement of record 11 per cent of GDP 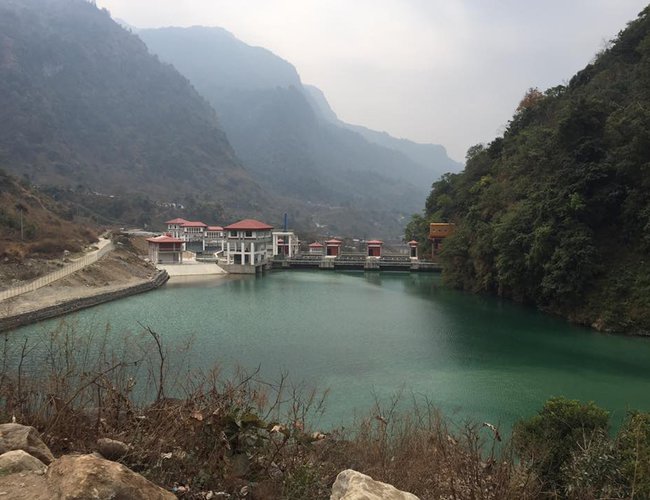 On 18 July 2017, the Vice Chairman of the NPC and head of the Nepali delegation, Min Bahadur Shrestha, presented Nepal’s national statement at the Plenary Meeting of the 2017 High Level Political Forum held at the UN Headquarters in New York. He presented a very positive outlook for Nepal for the coming months and years ahead.  Shortly after his speech, I wrote a piece for Spotlight on ‘the (poor) state of the economy’, in which I drew attention to a number of issues that cast doubt on his optimistic forecast.

Firstly, he said that he anticipated a growth rate of 7 per cent in Nepal’s GDP for the year 2016-17. I pointed out that he did not refer to the fact that Nepal’s economy still relies heavily on rain-fed agriculture - despite its decline over recent decades to below 30 per cent of GDP (due to the failure to develop an adequate infrastructure for irrigation), which meant only 40 per cent of the arable area in the eastern region had been planted to rice this year – because of the absence of any growth in the tiny industrial sector (less than 10 per cent of GDP).

It is now clear, at the end of December 2017, that agriculture is likely not to achieve the anticipated level of output this year (2017-18), in large part because of the reduction in paddy production as compared with the previous year (2016-17). Last year was a record year for paddy, with an annual production of 5.23 million metric tonnes. The Ministry of Agricultural Development had hoped for 5.4 million tonnes this year, based on an anticipated increased output in specially targeted areas of the terai where special programmes to produce two harvests in the year had been initiated; but it now looks as though 5.1 is more likely. Paddy is the key cereal crop and accounts for around 22 per cent of agricultural GDP, so its failure to achieve the ambitious targets – in large part because of drought during the planting period and subsequent floods in the monsoon – has had a telling effect on agricultural output in general.

The industrial sector had also been considered likely to grow strongly, given the more reliable supply of power and energy provided by the NEA and the grid since 2016. But the initial effect of the improved flow of power and energy was felt in 2016-17, and the delay in the completion of the 456 MW Upper Tamakoshi project, mean that the industrial sector is now unlikely to improve on last year’s performance and exceed last year’s achievement of record 11 per cent of GDP. This should not be regarded as a failure, however, and the prospects for the sector, particularly for small and medium enterprises must be better than they have been for some time.

On the other hand, bank lending to the private sector generally has not maintained the momentum of the previous fiscal year, when it grew by a dramatic 30 per cent (up to December 2016); this year, so far, growth in lending has remained at around 17-18 per cent and there is concern that banks are on the brink of a short term credit crunch as 40 per cent of income tax needs to be paid by mid-January 2018 and it is estimated that something between Rs 30 and RS 35 billion will be withdrawn from the banking system for this purpose.

On the other side of ‘the balance sheet’, the level of bank deposits has also been somewhat disappointing. Growth in remittances continues but the rate of growth has certainly slowed down; indeed, the figures for the first four months of the year suggest a small drop of 1.4 per cent in remittances. Consumer spending had been expected to grow, and to have contributed to a continuing expansion in the service sector, including retail, wholesale, trade and tourism, and so to an increase in bank deposits; but it did not, despite large expenditures on the elections. The government has continued to find it difficult to spend the budget allocated for development programmes and projects yet again. All of this has affected not only bank deposits but the growth of the service sector as a whole.

Finally, the trade figures just out for the first four months of 2017-2018 make for very gloomy reading. The trade deficit continues to increase: Rs 336.5 billion spent on imports and only Rs 26.4 billion coming from exports. This deficit – of Rs 310.2 billion – is significantly worse than the figure for 2016-17 of Rs 277.3 billion. Some of this is accounted for by an increase in imports of construction materials, some of which have gone to the slow-moving programme for reconstruction in the aftermath (now two and a half years) of the April and May earthquakes which adversely affected 14 hill districts and damaged or destroyed over 600,000 homes, and some of which has gone to urban development. But the real failure is in the area of exports.

Nepal remains highly dependent on remittances from Nepali migrants living and working abroad to maintain its balance of payments and the trade deficit indicates clearly just how reliant on remittances and other flows of funds Nepal remains in the absence of any real change in the level of exports. With remittances growing only slowly – and possibly even falling somewhat – the current account moved into deficit and the balance of payments surplus shrunk from Rs 22 billion to Rs 2.4 billion during the first four months of 2017-2018.

The change in exports so badly needed depends on changing production structures in agriculture and industry, supporting existing and future industries by reducing the costs of their inputs and giving them a comparative advantage over foreign firms, in promoting entrepreneurial development and employment on a large scale, and in harnessing the constant growth in manpower as young people reach a certain age and seek rewarding income generating and employment opportunities. So far, Nepal has failed to meet the challenge in this regard.

As the newly elected representatives at all levels, local, provincial and national take their seats in the new councils across the country, and new layers of bureaucrats and civil servants are appointed, in the coming months, the challenge will increase. It will be necessary to transform the process of decision making by government (at all levels), to make these new political and administrative structures efficient and cost effective, and to promote greater inter-action and synergy between private and public sector investment and activity, in order to generate the kind of initiatives and interventions that can not only improve people’s lives and welfare but contribute to more productive economic activities inside Nepal - in the seven provinces and the newly defined local rural and municipal areas - and to the growth of a wider range of exports.

One idea that might serve many purposes is that of a new National Service for young people to reduce unemployment, to contribute to public works and infrastructural development (including post-earthquake and post-disaster reconstruction), to provide training for skills development and on-the-job experience, to stimulate entrepreneurial initiatives and new small and medium businesses, and to give meaning and purpose to the hundreds of thousands of young Nepalis who seek a future, not working abroad or overseas but in Nepal, for their own advancement and for the social and economic wellbeing of their families, their local communities, their provinces and their nation.

For this, there needs to be a new political commitment on the part of those political parties that will form the government, at local, provincial and national level, to develop coherent and realistic strategies, policies, programmes and projects in the interests of all, and not just of a narrow minority; strategies that are inclusive and seek the wellbeing and advancement of all, whatever class, caste, ethnicity, age or gender.

This in turn will mean recognizing the legitimate concerns and demands of different regions and different provinces, including those that feel themselves disadvantaged and discriminated against – for example the Karnali region (province no. 6) and the Madhes (province no. 2), and ensuring appropriate mechanisms for the allocation and if necessary re-distribution of resources between provinces. It will mean ensuring the allocation of resources, human, technical, material and financial as required to the local councils and their areas. It will also mean re-structuring the parties to ensure genuine internal decentralization and democracy, devolution of resources and of power.

With the results of the elections nearly complete – except for the elections to the Upper House – it is possible to envisage a period of relative political stability with a national government composed largely of representatives of the CPN (UML) and the CPN (Maoist Centre) and an opposition composed of representatives of the Nepali Congress Party and others. This could, if the UML and the Maoists manage to merge effectively – which of course remains to be seen – provide a genuine ‘left’ government with a commitment to a strategy of radical economic and social transformation, guided by broadly socialist principles and clearly defined and selective state intervention. There will undoubtedly be considerable pressure from the new opposition and from various external forces committed to the neo-liberal ideology of development to promote economic development through private enterprise and ‘free’ markets.

But what is needed – in the light of Nepal’s diversity - is a coherent programme of effective state investment and selective support to the key sectors of the economy across the country as a whole which also remains open to a degree of pluralism and to the idea of fostering provincial and local initiatives. If Nepal is to continue to improve the wellbeing of its citizens and to provide the opportunities for income generation and employment within the country that are so badly needed, it will have to draw on the energy and dynamism of the Nepali people, and on the good-will and assistance of others; but it will also have to provide a clear and coherent vision for the future, in the national interest and in the interests of all Nepali, and the leadership and guidance in the short and medium term, to make that vision a reality.

Neither over-optimism nor undue pessimism are appropriate; what is required is a genuine commitment to make the most of the rich national resources available, to meet the challenges of climate change and natural disasters, and to develop positive and constructive relationships with its powerful neighbours and other international players, while at the same time remaining committed to democracy, social justice, and sustainable development.

Seddon is a development analyst with a long involvement in Nepal. He is co-author, among other works, of Nepal in Crisis: growth and stagnation at the periphery, and has contributed previously to New Spotlight.

Nepal Is Bearing The Disproportionate Burden Of Climate Change By BHARAT RAJ PAUDYAL 23 hours, 15 minutes ago

Refugees In Nepal: Recognition And Inclusion By Deepesh Das Shrestha 3 days, 18 hours ago

Nepal’s 2022 elections: a step towards democratic consolidation? By Sovit Subedi and Bishnu Adhikari 4 days, 17 hours ago

The Fantasy Of Democracy & Republic Morphing Into Delirium By Kedar Neupane 5 days, 17 hours ago